Most of the attractions in Belém are closed on Mondays, some public holidays and operate on a 10:00 to 17:00 schedule for the rest of the week, although they usually remain open later in summer.  Check locally to ensure the schedule of any attraction on your list. 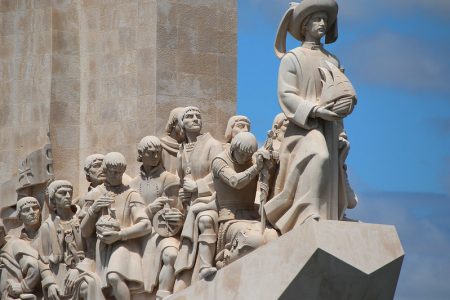 This is the area of Lisbon that is associated with the Age of Discoveries and the Portuguese navigators. Although the major attractions are among the best in Lisbon, you should take some time to examine the neighborhood of Belém, as it has a different flavor than other parts of Lisbon.

The Discoveries Monument (Descobrimentos)  marks the location of the embarkation point for many of the voyages undertaken by the Portuguese navigators. The monument is stunning and highly detailed. It includes sculptures of Vasco da Gama, Magellan, Cabal and others, but it is Henry the Navigator who stands at the prow of the ship (the monument is a 170 foot high slab sculpted to resemble a tri-masted sailing ship). The monument was dedicated in 1960 for the 500th anniversary of the death of Henry the Navigator.

To the west of the Discoveries Monument is the Belém Tower (Torre de Belém), built in the early 16th century to guard Lisbon’s harbor.  During the past few decades, the Tower has become known as an international symbol representing Lisbon.  The Torre was constructed on an island in the harbor. Due to silting in the river’s channel, The Belém Tower now abuts the shore.

The building is beautiful, small and unlikely to have provided any real protection from invading brigands with heavily armed ships. The Belém tower is ornately decorated and considered a monument to the Manueline style of architecture. (Manueline is an ornate style of architecture is named after the Portuguese King Manuel 1st and combines Portuguese, Spanish, Italian, Flemish and Islamic design concepts.)

It is hard to imagine the first two monuments in Belém being topped by another related to the Age of Discoveries, but the Jerónimos Monastery (Mosteiro dos Jerónimos) is the crown jewel of Belém.

The monastery and church were constructed during the 16th and 17th centuries to commemorate the voyages of Vasco da Gama (whose tomb is to the left when one enters the church, although there is some debate about whose bones are in the tomb). Priest and brothers from the Order of St. Jerome were responsible for the church and monastery, as well as tending to the religious needs of the many seafarers who arrived at and departed  from Lisbon at the docks of Belém.

Jerónimos is stunning from the outside and is noted for surviving the earthquake of 1755. The exterior of Jerónimos is richly decorated and another impressive example of the Manueline style of architecture. One interesting aspect of the interior of the church associated with the Monastery (Santa Maria de Belém) is its vaulted roof, which crosses approximately 100’ in a single span.

Do not miss a chance to tour the Cloisters of the Jerónimos Monastery. This is a large cloister that incorporates two stories and is has numerous unusual details. The decorative aspects of the Cloisters, especially around the pillars and arches are both whimsical and informative. The design variations are pleasing and intriguing.

Be sure to visit the Refectory, which features an impressive vaulted ceiling. In addition, in this room, the tiled panels depicting stories from the New and Old Testament are striking. Although many critics claim that the Cloisters were overly decorated, we found them to be beautiful and feel that they  serve to preserve a remarkable and heady period in Portugal’s history.

The Cloisters have been renovated recently and the the surface cleaning project has returned much of the stone to its original condition.  The walls of the Cloister facing the garden now look  more beautiful than ever.

See this site for detailed information on the Jerónimos Monastery and details on visiting.

The western section of the Monastery now houses a Maritime Museum (Museu de Marinha) featuring a large collection of model boats, representing many boats, but particularly ships from the Age of Discoveries.   In addition, the museum has a fine astrolabe collection and numerous, gaudy ceremonial barges. Unless you have a lot of time, a love of boats and a keen interest about the Age of Discoveries, you may want to consider skipping this museum.   On the other hand, the museum has a  17th century terrestrial globe  by Blaeu that is extraordinary. The museum is open Tuesday through Friday.  For more information, visit this site. (Use Google Translator as the site is in Portuguese.)

To the east of the Monastery, the Museu Nacional dos Coches  (open Tuesday through Sunday) is located at the Praça Afonso de Albuquerque. The National Coach Museum features horse-drawn carriages used throughout history by various European royal families, though focused on those from Portugal. Interestingly, this is one of the most popular museums in Lisbon and the whole of Portugal. In addition, it is reputed to be the largest collection of coaches in the world.

Further west of Belém, the Rio Tejo merges with the Atlantic Ocean. To the north, there are several attractive locations for a daytrip from Lisbon.

Estoril is a splendid resort area that adds  horseracing, and a casino to its fine beaches.

Cascais, a little further north, has retained much of its fishing village ambiance, although modernization is slowly turning the town into a tourism center. Cascais has several wonderful outdoor restaurants that serve authentic Portuguese meals (try the sardines for a real treat) and good shopping. Numerous  artisans have opened shops in Cascais and we have found it a good place to pick-up beautiful but relatively inexpensive pottery.

One easy was to travel to Estoril and Cascais is to take the train  from the Cais do Sodré to the west of Praça do Comércio in Lisbon.    Pickpockets and petty-theft are said to be common on this line, so keep an eye on your belongings if you choose to ride the rails.

Two other exciting attractions not too far from Lisbon are Sintra and Queluz, hallmarks of the royal life in Portugal’s past.

A final thought – although the beaches in this section of Portugal are inviting, if you are looking for a place to plop and watch the water, the beaches and climate are better in Portugal’s Algarve and we recommend a stop here if you are serious about your “sun-time”.