The Petrified Forest National Park encompasses parts of the Painted Desert and an amazing collection of petrified wood that has been converted to rock, usually some form of quartz.  These shiny fossils of trees (usually portions of tree trunks or branches) come is an amazing variety of colors and are scattered throughout the park.What is now a high, dry tableland on the southern edge of the Colorado Plateau was crossed by numerous mineral laden steams during the Triassic era, about 225 million years ago. The trees that then grew here would eventually die, fall and be covered by silt, mud and volcanic ash carried by the rivers. Over time, the wood tissue in the tree husks were penetrated by silica rich groundwater.  Over time, the silica crystallized into quartz and the logs were preserved as petrified wood.

Eventually this section of the Colorado Plateau sank and was once again covered by sediment from an inland sea.  Tectonic forces once again lifted the area  and from that time to now wind and water have worn away the sedimentary layers and uncovered  fossil bearing material including petrified wood, as well as the skeletons of unique dinosaurs. In addition, the erosion process has also revealed the amazing colors of the sediments in the Painted Desert which have been sculpted into a number of pleasant shapes in a landscape that is typified by colorful, rolling hills.

There are numerous short trails throughout the park that explore the remains of the areas petrified trees. Check the park’s website for more details on things to do while visiting.

The entrance fee to the park is $10 per private vehicle, $5 for pedestrian or cyclist. Admission is for 7 days.

The Petrified Forest National Park is open year around, except for Christmas. Park hours vary but you can expect it to be open from at least 8 a.m. to 5 p.m., although it is generally open an hour earlier and closes one to two hours later in fall, spring and summer.  See the park’s official website  for more details on visiting.

The park sits at 5,400 feet elevation and is located in a sparsely populated section of eastern Arizona. The area is vast, empty and extremely hot in the summer. Be sure that you vehicle is in good shape before touring this area.

The best way to experience Petrified Forest National Park is to drive.  You can enter the park from the south or the north and the distance through the park is around 30 miles.  The main road has many scenic overlooks and places for short hikes, so it is easy to spend several hours in the park.  There is no water available in the park and you should be equipped with a gallon per person per day to survive the unexpected in the desert.

The main visitor center (the Painted Desert Visitor Center) is a the north end off of Interstate 40 and is well worth a visit.  Near the entrance, but inside the park is the Painted Desert Inn National Historic Landmark that has been recently reopened. The building functions as a museum and a bookstore (no lodging) and is a wonderful example of traditional southwest architecture.

The Rainbow Forest Museum at the south end of the park has a number of fossil exhibits, offers and orientation movie and is near several interesting trailheads in the park.

One of the main reasons the park was established was to preserve and area of petrified wood for posterity.  Please do not take any of these fossils as a keepsake, as you are denuding this park of one of its greatest treasures.  Of course, substantial fines will be levied if you are caught.  You can buy petrified wood that has been harvested outside of the park at the shops within the park and in nearby towns. 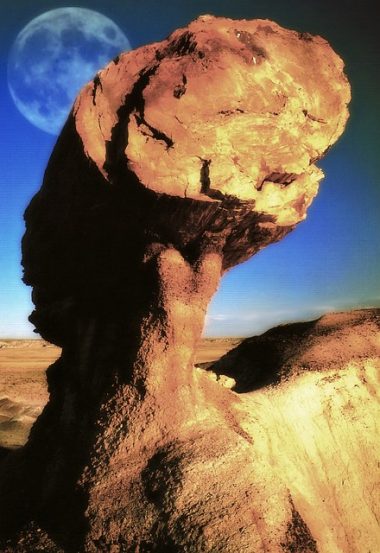 There is no  campground in park, but you can get a free permit to camp in the wild.  For more information about backpacking in the park and how to obtain the permit (as well other details on what’s allowed) see this section of the park’s website. Best Time to Visit

Winter is the best season for a visit, due to the cool temperature and clear days that are common in this area, although most of the park’s 600,000 annual visitors tour during the summer months

Snow and rain occur throughout the winter and snow can be expected as early as October and as late as March.  Rainfall peaks in July and August and is usually in the form of thunderstorms.  The park is also in one of the windiest sections of Arizona. You can expect to see dust devils and an occasional sandstorm during the summers.

Summer temperatures (from May to early September) are in the mid to high nineties (F) with drops into the sixties (F) at night.  July is usually the park’s hottest month.

Daytime temperatures in winter range from the forties (F)  to fifties (F), but can drop into the teens at night.  December is usually the park’s coldest month, but is only slightly colder than January.

Lodging is not available in the park, although Holbrook, Arizona (27 miles west) and Winslow, Arizona (52 miles west) offer a selection of accommodations.  If you are headed west, you might be interested in visiting Meteor Crater (or perhaps seeing it on the way to Petrified Forest National Park).  It is  35 miles east of Flagstaff and 20 miles west of Winslow.  Meteor Crater’s website provides details on the crater and visiting .

If you are heading east,  Gallup, New Mexico is 68 miles.

Canyon de Chelly National Monument (107 miles) is to the north of Petrified Forest National Park. Canyon de Chelly is another of the area’s interesting cliff house dwellings, but the road in is rough and there are no facilities.  If you are interested in more detail, visit the park’s website.