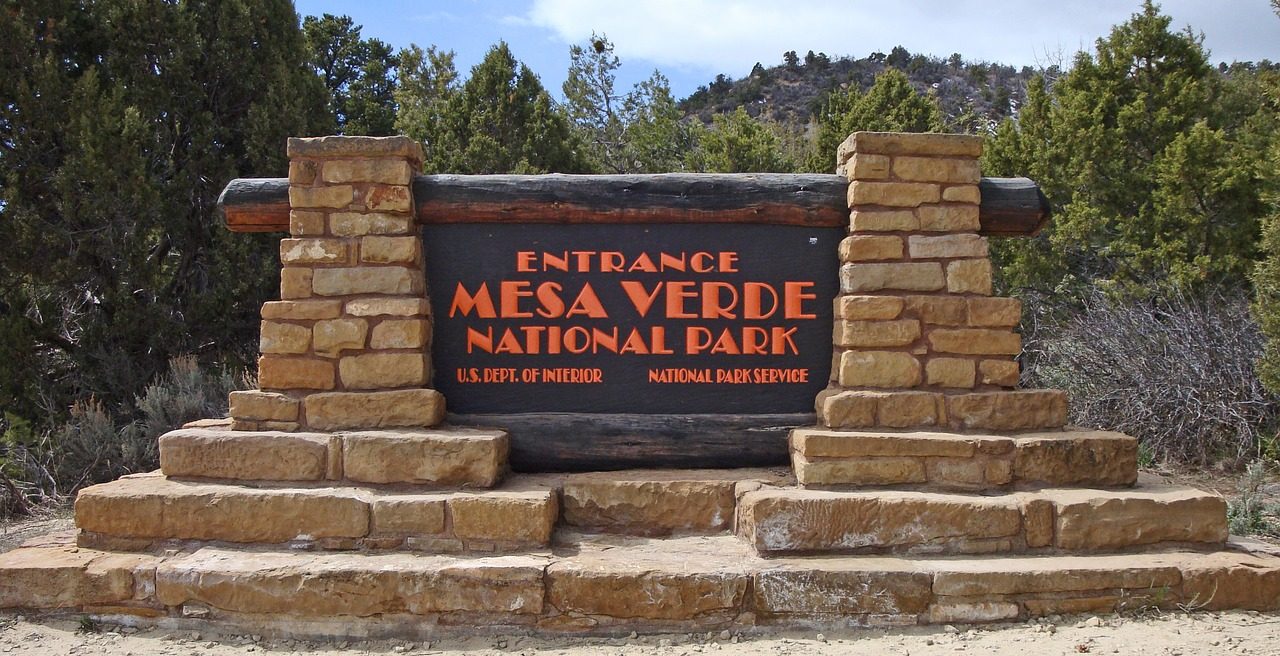 Mesa Verde National Park is reputed for its archaeological sites, especially its unique cliff dwellings, some of which include multi-story dwellings wedged into narrow chasms from floor to ceiling.

The villages and cliff dwellings at Mesa Verde are far from the highway and there is little about the area that would lead you to expect the amazing set of archaeological treasures that are available to explore in this Park.The Ancestral Pueblo people made this area of southwestern Colorado their home between 600 A.D. and 1300 A.D. and then they mysteriously abandoned this area forever. Many believe that drought was the reason for this emigration, but others believe it may have been caused by the  invasion of the area by other Native American Tribes.  The disappearance of these creative engineers is part of the mystery and allure of this scenic park.

For most of their tenure in southwestern Colorado, the Pueblo  Indians lived in scattered  villages along the tops of the tops of the area’s mesas. During the last 100 years of  their residence at Mesa Verde, they began to live in cliff dwellings eked out of caves or naturally eroded platforms on the sides of the mesas. The cliff dwellings,  which are the main reason to visit Mesa Verde, include some of the finest to be found in the United States. In addition, the southwest of Colorado is another of the state’s remarkable scenic areas and worth seeing for its unique and colorful landscapes.

Although the Park’s villages are interesting, it is the cliff dwellings that attract the attention of most visitors. The dwellings at Mesa Verde were re-discovered by local ranchers in the late 19th century and the park was established in 1906.  Covering 52,000 acres (21,000 hectares), the park protects 4,500 archeological sites including over 600 cliff dwellings. Only a small number of the sites are open to the public.

The cliff dwellings are wedged into opening in the sides of the local mesas and  closely blend with the coloring and geometry of the local rocks (mostly sandstones).  Visiting Mesa Verde feels like entering someone else’s home when they are away on vacation and you have been asked to mind the cats.  Many of the dwelling are well-preserved and looking at them from the cliffs, you almost  expect to see a native Pueblan emerging and going about their day’s business.

The views of the surrounding countryside can be impressive, especially the vista from Wetherill Mesa that includes the adjacent Montezuma Valley.  Although we generally hope rain will not intrude on our vacation, the sunsets on rainy days in Mesa Verde as about as spectacular as you can find anywhere in the Southwest.  The park itself is not as scenic as those of the Colorado Plateau to the west (Bryce, Zion, and the Grand Canyon), but it has its charms, although most of these have to do with its amazing archaeological sites.

The entrance fee to the park is $15 for private vehicles and $8 for motorcycles, bicycles and pedestrians for the summer months.  During the remainder of the year the entrance fee is discounted.  Admission is for 7 days.

Although the park is open year round, not all of the dwellings can be toured in every season.

If your time at Mesa Verde National Park is limited, head for Chapin Mesa where you can explore the Cliff Palace (Mesa Verde’s largest cliff dwelling), the Balcony House and Spruce Tree House (these attractions are not covered by the entrance fee and you will need to purchase tickets to visit these attractions).

Long house on Weatherill Mesa (open from Memorial Day (last Monday of May) to Labor day (first Monday in September) is also an interesting tour, so consider it, if you have not yet exhausted your interest in cliff dwellings by this point in your stay.  You may also want to see the Chapin Mesa Archeological museum and  Far View Sites Complex, comprised of five mesa-top villages and the Far View Reservoir.

Many of the paths to the cliff dwellings are strenuous activities and some require climbing ladders for access. Remember, the park is located at 7,000 feet elevation and acclimating yourself to the “thin” air is a good idea. Those with high blood pressure, asthma, heart condition or other illnesses should discuss visiting this type of environment with their physician prior to departure.

The Morefield Campground with 435 sites is just four miles inside of the Park.  See this section of the Mesa Verde website for more details.  In addition, you can “base camp” – that is have  your tent and other equipment provided by Aramark (the company responsible for lodging and other services at the park).  See this link for details on “base camping”.

The best time of year to visit Mesa Verde National Park is from the end of May to the end of October (although the weather is often cold, wet and sometimes sleety during October and November).  Snowstorms can occur as late as May and as early as October, so many consider the Park’s sweet spot to be June and July.  The summer months are usually warm, sometimes hot, but almost always with cool evenings.  Expect it to be cool around sunrise in the summer and be prepared for cool weather, especially if you are camping.  Thunderstorms are common in August, but make for excellent sunsets and great photography.

If you don’t want to camp, we highly recommend staying at the Far View Lodge, which also within the Park.  Located  near the Visitor Center, many of its rooms have gorgeous views.  The Lodge is open only from late April to mid to late October.  Lodging can be found in the nearby towns of Mancos (23 miles) and the larger Cortez, Colorado (25 miles).

Durango, an old mining town, is also a great place to stay, but it’s a longer drive at approximately 50 miles.  However, it is here that you can catch the narrow gauge Durango-Silverton Railroad   which chugs its way along the beautiful gorge of the Las Animas River in a scenic train ride that is well worth your time.

If you prefer to head west, you might want to explore unforgettable Arches National Park near Moab, Utah (139 miles).

If you head south to New Mexico, consider a route that will take you towards the town of Shiprock (57 miles).  About 12 miles south of town on Highway 491 you will see Shiprock, a volcanic neck (lava solidified in the throat of a volcano and then revealed by erosion) that looms across the desert looking like an abandoned sailing ship.  It is quite spectacular, but may appeal only to those of you who love unique landforms.

By the way, Highway 491 was formerly Highway 666, which was part of the fun of driving it.  For a time, the road was known at the “Highway from Hell”.    Unfortunately, the transportation department spent a fortune on road signs, as they , apparently,  were stolen for souvenirs, almost as fast as they could be erected.  Originally the road ran from Gallup, New Mexico to Cortez, Colorado although it was later extended  to reach Monticello, Utah and Douglas, Arizona.

If you take the Shiprock route, continue south to tour the Petrified Forest National Park  (170 miles from Shiprock) and then west to see the Grand Canyon National Park.

If you prefer, you can head directly to the Grand Canyon National Park from Mesa Verde through Tuba City in a 291 mile drive that takes you through the scenic Four Corners Country.  Many travelers are attracted to the Four Corners monument, which is the only place in the United States where four states join. (Although a popular folktale is that  this monument is mislocated by almost two miles  due to a surveying error in the past. this is simply not true). In addition, to the west is Monument Valley along highway 163 in northern Arizona and southern Utah. Although this may sound somewhat irreverent, many of you will know this  area as the home of Wile Coyote  from the Road Runner cartoons.