Mayfair is a compact, exclusive area comprised of expensive town homes, interesting shops and delightful (but often expensive) restaurants. The West End is “Tourist London” and derives its name from its location to the west of the City of London. The West End, especially the area around Leicester Square, is known as the center of theater in London.

This section of our London, England City Guide describes the best places to visit in Mayfair and the West End. Click the links below to go directly to a specific place or just read the page to explore this section of London. 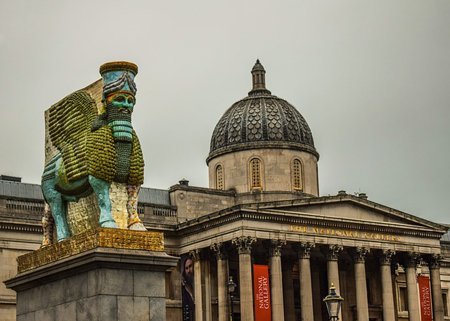 One of London’s most famous attractions, Trafalgar Square was created in the 1800’s to commemorate the victory of the British fleet, commanded by Admiral Nelson in the Battle of Cape Trafalgar (near Cadiz Spain). In the battle, an element of the British fleet soundly defeated a French-Spanish fleet in what was the deciding naval battle of the Napoleonic Wars.

Admiral Nelson died of battle wounds shortly after hearing that victory was his. In a rather interesting move, his body was preserved in a keg of rum, for the voyage back to port. Nelson’s statute adorns a tall column in his honor that is the focal point of the Square. Four massive black lions surround the base of the pillar and together form a remarkable monument. Other statues scattered throughout the Square commemorate famous members of the British Empire.

Trafalgar Square was renovated and made pedestrian friendly during the last decade and provides good photo opportunity (if you can clear some space from the ever-present billions of pigeons).The National Gallery and the Church of St. Martin in the Fields face the Square.

If you are a Sherlock Holmes fan, wander down Northumberland Avenue (across from the south side of the Square) a few steps to 10 -11 Northumberland Street (not avenue) where you will find the Sherlock Holmes Pub . It has good “pub grub” and an upstairs room decorated in accordance with Arthur Conan Doyle’s descriptions of  Holmes’s rooms at 221b Baker Street, down to the Persian slipper stuffed with Tobacco.

Oxford Street, traditionally London’s main shopping street, has been taken over by chain stores featuring a broader variety of goods than available in the past, though at the expense of some of its character. If you are looking for casual “British style” clothing, this is the place to shop. Be prepared for crowds most any time, but If you shop on a Saturday, you might begin believing the claim that this is the busiest street in Europe.

Oxford Street is a good but not great area for shopping since it is similar to shopping at home. If you want to take a look at the shops and where they are on Oxford street, visit this UK-based website where you can view photos of the stores, arranged as the occur along Oxford Street starting at Marble Arch.

Selfridges, an enormous, traditional British department store, near Marble Arch is a good place to start your trip along Oxford Street.

The Dover Street Market (17-18 Dover Street London W1S 4LT) is one of the newest and most trendy retailers in London. The six floors of shops  in the building are the brainchild of Rei Kawakubo and Comme des Garçons. 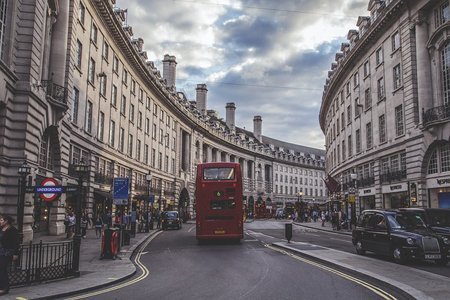 If you explore Regent Street for shopping, you might want to spend some time on Carnaby Street in Soho, if its tastes suit you (in Soho – to the east of Regent Street south of Oxford) ). Soho might best be described as “edgy”. It is an area that mixes popular restaurants and nightclubs with sex shops and a sometimes mixed clientele. See this website for more information on visiting Carnaby Street.

Near Piccadilly Circus, this is a quiet little area in Mayfair between Piccadilly and Curzon Streets that provides great restaurants, outdoor dining when the weather permits, interesting shops and a great atmosphere. If you are in the area, wander its lanes and you will be glad you did.

Several of the cafes are breakfast shops and provide great breakfasts for a reasonable price (much more reasonable than you will pay at most hotels). Shepherd Market (not to be confused with Shepherd’s Bush Market in another part of London) is quite small and can be toured in a matter of minutes. It is likely you will find a restaurant of pub beckoning to you, if one of the quaint shops does not get you first.

If you enjoy Middle Eastern/Lebanese food, try Al Hamra at 31-33 Shepherd Market (at corner of Trebeck). Or, wander up Piccadilly towards the Piccadilly Circus to dine at Fakhreldine at 85 Piccadilly.

Piccadilly Circus is a London landmark that like many signature locations, doesn’t offer much more than a dazzling view. Piccadilly Circus reminds the traveler of Times Square or Ginza, due to the preponderance of huge, glitzy, advertising adorning many of the building in the intersections.

The most famous meeting space in the Circus is the statue commonly known as Eros (not the original name nor intent of the sculpture). Nevertheless, the Greek god of love attracts many tourists and provides a good, identifiable photo opportunity.

Five of London’s major thoroughfares converge at Piccadilly Circus, which is a good jumping off point for Trafalgar Square, Soho, Chinatown or shopping on Regent and Oxford streets.

Piccadilly Square is the home of the upscale Ritz Hotel, which dates from 1905.  Having afternoon tea at the Ritz is a treat, but the dress code is formal and requires a jacket and tie (jeans and sports shoes not permitted.  Reservations are required.

Another of  famous landmarks in this area is the Fortnum and Mason’s department store that has been situated in the heart of Piccadilly since 1707.  The store features fine food, great restaurants and a wide-variety of goods.

These two National Galleries are next door to each other and provide a thorough collection of English portraiture and European art.

The National Gallery bills itself as “…one of the greatest collections of European painting in the world” and the public seems to agree, as the this is the most visited attraction in London. The Gallery’s collection includes over 2,300 paintings created between the thirteenth and twentieth centuries. Visit the National Gallery web site for information on its hours of operation and special exhibitions.