Joshua Tree National Park is located in a forlorn section of eastern California where the Mojave Desert meets the Colorado Desert in a colorful tumult of rocks and arid vegetation.The Colorado Desert occupies the eastern section of the park  and features gardens of Cholla cacti and Ocotillo, a multi branch whip-like plant, along with the ever-present Creosote Bush. The Mojave Desert section, to the north, is cooler, wetter and home to the Joshua Tree, the Park’s namesake.

Local legend holds that Mormon settlers, when transiting California in the 19th century, came upon a tree that appeared to be pointing the way to the Promised Land and so named the tree after Joshua, the leader of the Israelite tribes after the death of Moses.

In addition to its unique vegetation, Joshua Tree National Park is noted for its colossal  jumbles of rock.

The rock formations now visible at Joshua Tree were originally  formed as large pools of magma that moved towards the surface of the Mojave, but never quite managed to escape to the surface and cool in the atmosphere.  Instead, the molten material crystallized over vast periods of time and slowly evolved into a form of granite called monzogranite.  During the succeeding geologic eras, the surface materials covering these deposits were eroded away and  the monzogranite formations, finally arriving at the surface,  were greeted by destructive erosional forces.

The monzogranite at Joshua Tree has a rectangular joint system and these joints have been attacked by water and frost over eons, leading to piles of large rectangular blocks of rock.  Of course, the process continues to erode the material and in many areas the park appears almost as if it had been shattered by a  cosmic hammer.  The overall look is unique and very dramatic.  Numerous areas of the Park highlight this process.  Be sure to visit the Arch Rocks, Jumbo Rocks and Skull Rocks areas to see some of the best topography.

Two of our favorite areas within Joshua Tree are famous for their vegetation.  The Cholla Garden is, not surprisingly, composed of Teddy Bear Cholla, more commonly known as “Jumping Cholla”.  These compact cacti are loaded with thousand of spines that are ready to “spring” into action, if you should happen to bump into one (not recommended).  The Chollas are a compact, silvery green cactus whose blooms, though interesting, are not part of its reproductive process. Instead, the stalk and stems die and drop into the nearby soil, reseeding the cacti in the process.

The Cholla Garden features a brief nature walk (you will find a  brochure describing the walk at the trail head – donations accepted) and is something you should consider if visiting the park. 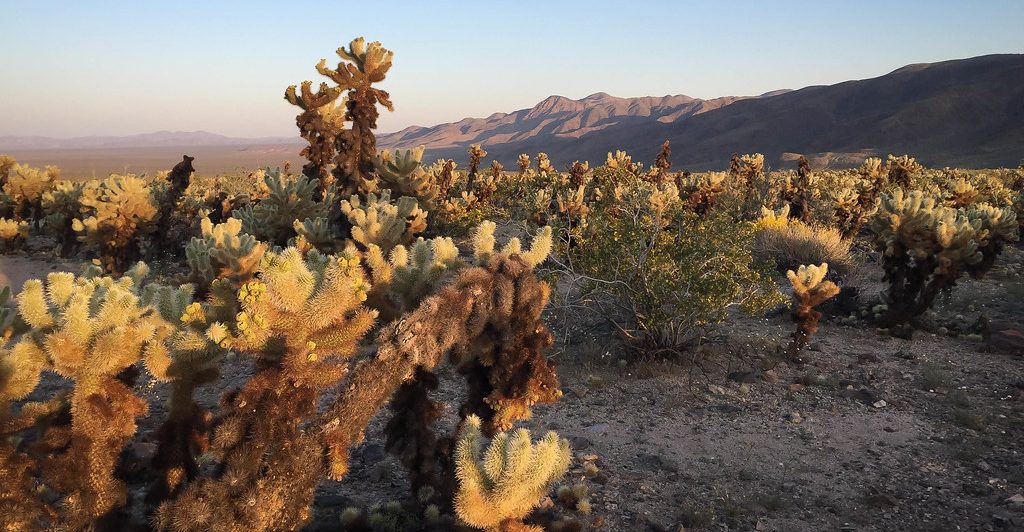 As noted earlier, the Joshua Trees are located in the Mojave Desert section of Joshua Tree and can be found by following the road that eventually leads to the Town of Joshua Tree (the town is located outside of the park).  The Joshua trees are scraggly looking, but quite impressive when they are in bloom (usually near Easter).  The tree is a Yucca variant known as Yucca brevefolia and a member of the Lily family.

The tree form seems to defy description. The younger Joshua Trees are usually  upright and comprised of a limited number of branches arranged in a tidy fashion. Older trees often exhibit a large number of branches that are bent, gnarled and trend in a million directions, sometimes along the ground, Joshua Tree National Park covers nearly 800,000 acres and much of it is too remote for casual touring.  The park’s main road passes all  the major attractions of the park and driving this road will provide a day of adventure for you and your family.

The entrance fee to the park is $15 for a 7-day vehicle permit,  which covers all of the passengers in the vehicle. Discounts are available for seniors (aged 62 and older) through the Interagency Senior Pass that costs $10.  The Senior Pass is available to U.S. citizens or permanent residents age 62 or over and is good for a lifetime.

Open all year, Joshua Tree has three, modest visitor centers at the Oasis, Joshua Tree and Cottonwood entrances.  The Park is not complex and, unless you are going to camp, can be toured in less than a day, including time to hike one or more of the Park’s delightful trails.

There are a number of programs led by park rangers,  including walks and hikes.  The Keys Ranch Tour is highly recommended, but you should make reservations in advance.

Joshua Tree has nine campgrounds and all are very popular during the season, which runs from  fall to  early spring.  Campsites are limited to six people, three tents and two cars, although group sites are, also, available.  Some of the campsites can be reserved in advance.  Check with the National Park Service for details.

The temperatures during the summer can be deadly and touring is recommended only during the late fall, winter and early spring.  Information on visiting and details for the park can be found at the official website of the National Park Service.

Remember that the Park can be cold at night during the winter.  In addition,  even in spring, the daytime weather can be cool, verging on cold and windy, so bring a light jacket just in case.

Other than camping, there are few places to lodge close to Joshua Tree.  Indio is 25 miles to the west of the Park’s south entrance at Cottonwood Springs.  Your best bet is to plan on staying at Palm Springs, La Quinta, Palm Desert or one of the other desert communities to the southwest of Joshua Tree National Park.