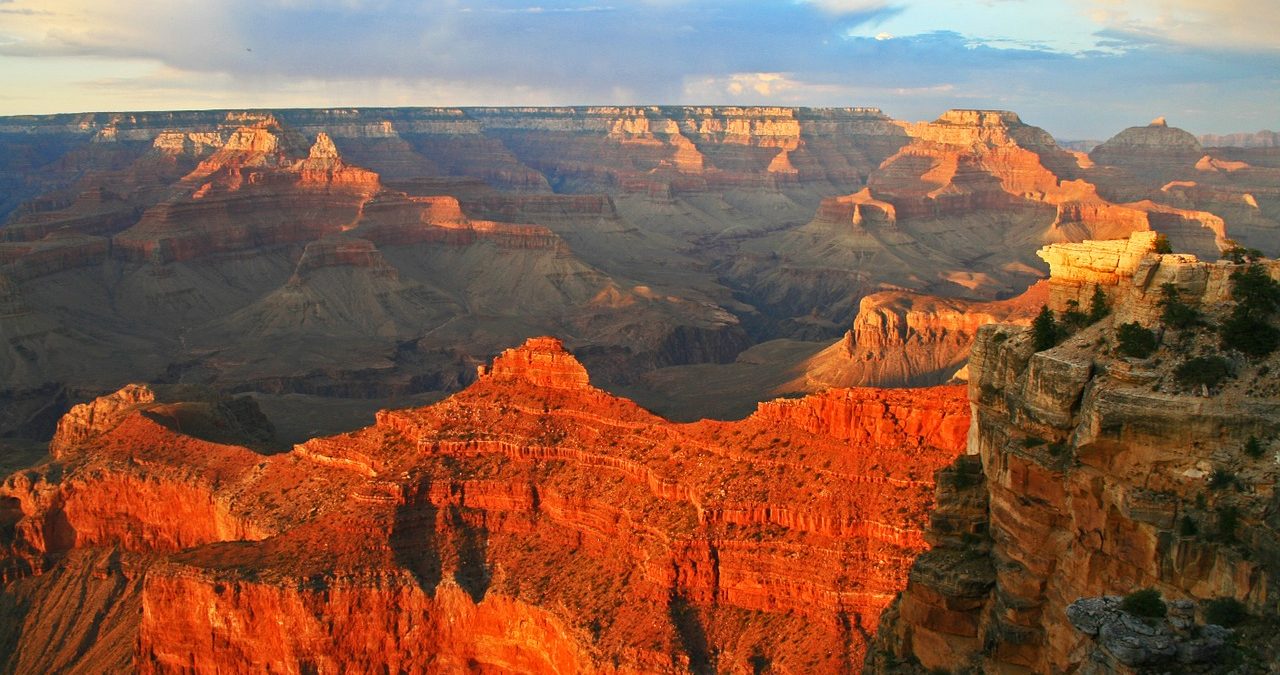 The amazing vistas in the Grand Canyon National Park reveal the continual battle between erosion and land building.  Stronger layers of rock are resistant to erosion and often form a cap that protects the rock layers beneath, creating canyons and buttes standing as isolated monuments  in an area where the capstone rock once ran from horizon to horizon. The snow-fed Colorado River carved the canyon we see today and it flows almost a mile below the canyon’s rim, as it continues cutting downward, now exposing some of the oldest rock layers in the United States

If you look closely, you will note the strata in the Grand Canyon are tipped to the north, which creates an asymmetry. If you visit the South Rim you will see Panoramic views of the temples in the canyon, while from the North Rim you peer into the abyss, while standing in the middle of it.

The rocks being exposed by the Colorado River are close to two billion years old.  The canyon is an erosional feature thought to be around six million years old. During this time, the Colorado River has managed to cut its channel  at a rate that slightly exceeded the uplift of the Colorado Plateau, allowing the river to function as a warm knife slicing through butter.  In a humid environment, the river would have widened its flood plain in a manner similar to that to the Mississippi River. Here, however, aridity has constrained river, although the Colorado will continue its work of carving the plateau down to sea level.

The geologic history of the Grand Canyon was largely unknown until after the Civil War.  John Wesley Powell, a Civil War veteran, made the first complete navigation through the Grand Canyon on the Colorado River with a team of ten riding in small wooden boats.  Powell, who was one armed, was quite an adventurer and was often tied to chair that was anchored in his boat so that he could observe the Canyon and its geology, even as they shot the rapids!  Powell later became the first director of the United States Geological Survey.

The Grand Canyon National Park encompasses both the North and South Rims of the Canyon.  If it is your first visit, we think you will find the panoramic views from the South Rim to your liking.  In addition, there is a wider range of lodging available at and near the South Rim and more vistas, as well as direct access to trails into the Canyon.  Approximately ninety-percent of those who visit select   the South Rim as their destination.

There is a small  airport (the Grand Canyon National Park Airport) at Tusayan,  however many visitors prefer to fly to Phoenix or Las Vegas as part of their trip to the Grand Canyons.  If you approach from the east (from the direction of Albuquerque) consider driving highway 89 to 64 to enter the park. Selecting this route has the advantage of taking you through the Sunset Crater Volcano National Monument, a scenic volcanic landscape that can be stunning at sunrise or sunset.

The South Rim of the Grand Canyon (around 7,000 feet in elevation) extends across many miles and touring by a vehicle is the easiest way to see the areas that may be of interest to you, although there is a shuttle that offers free service to several areas of the South Rim.  Many  visitors start their tour of the South Rim from Mather Point (the first overlook on the south entrance road), which is regarded by as the most panoramic of the views from the South Rim. The Canyon View Information Plaza is nearby and a good place gather more information about seeing the park. When you arrive, be sure to grab a copy the free park newspaper,  “The Guide”, which contains maps, act ivies, special programs and current news about the park (there are special issues for the North and South Rims).

Yavapi Point is just west of Mather Point and its observation tower features geology displays, as well as outstanding views of the Colorado River cutting away at the bottom of the Canyon.  Desert View Drive extends 25 miles to the east (to a place known as  Desert View) and offers numerous vistas where you can park and, then, view the Grand Canyon.

Be sure to take some time to hike along the approved paths on the Canyon’s edge for a sense of the tranquility that can be found away from the Grand Canyon Village and more popular overlooks. If you are in tip- top shape, you might want to consider talking to the rangers about hiking to the bottom of the Grand Canyon and back up. This is a rugged outing and should only be undertaken by those in good shape and prepared for a rigorous hike (bring plenty of water, wear good quality hiking boots and have ample amounts of food, sunscreen and determination).

The North Rim Visitor center, located on the Bright Angel Peninsula is a good place to start your tour. Continue past the Visitor Center to the Lodge for classic view of  the Grand Canyon. Nearby is a short trail that leads to spectacular views of Roaring Springs and Bright Angel Canyons.

Port Imperial and Cape Royal can be reached by a short, but scenic, winding drive and there is much to see along the way if you have the desire to stop, look and walk a little. Point Imperial is the highest point on the North Rim at 8800 feet and overlooks the Painted Desert and the eastern end of the Grand Canyon.

The entrance fee to the park is $25 per private vehicle, $12 for pedestrian or cyclist.  Admission is for 7 days and includes both the North and South Rims.  Discounts are available for seniors (aged 62 and older).

The South rim is open 365 days a year and visitor services, including camping, lodging and places to eat,  are available year round. The least crowded time to visit is November through February, but winter weather here is not ideal. The elevation at the South Rim is over 7000 ft (2134 meters) and visitors with respiratory of heart problems may experience difficulties. Walking at this elevation can be strenuous, even for the healthy.

The south rim is often crowded and a free, voluntary, shuttle bus system operates in the Grand Canyon Village area.  The shuttles run several routes and are a good way to get to several of the of the scenic overlooks while saving fuel and gaining lots of convenience.  Here is a link  to the shuttle bus section of the park website.

The North Rim has a shorter season and visitor services are available only  from mid-May through mid-October. The elevation is over 8000 ft (2438 meters) and visitors with respiratory of heart problems may experience difficulties. Walking at this elevation can be strenuous.  If you are a  real outdoors person, you can use the campsites in the park during the winter months, as long as you obtain a permit through the park’s Backcountry Information Center,

Camping comes in two flavors here.  Information about developed campgrounds (vehicles permitted) for the south Rim can be found here.  If you are interested in backpacking and camping within the Canyon, see this link from the Grand Canyon National Park website. 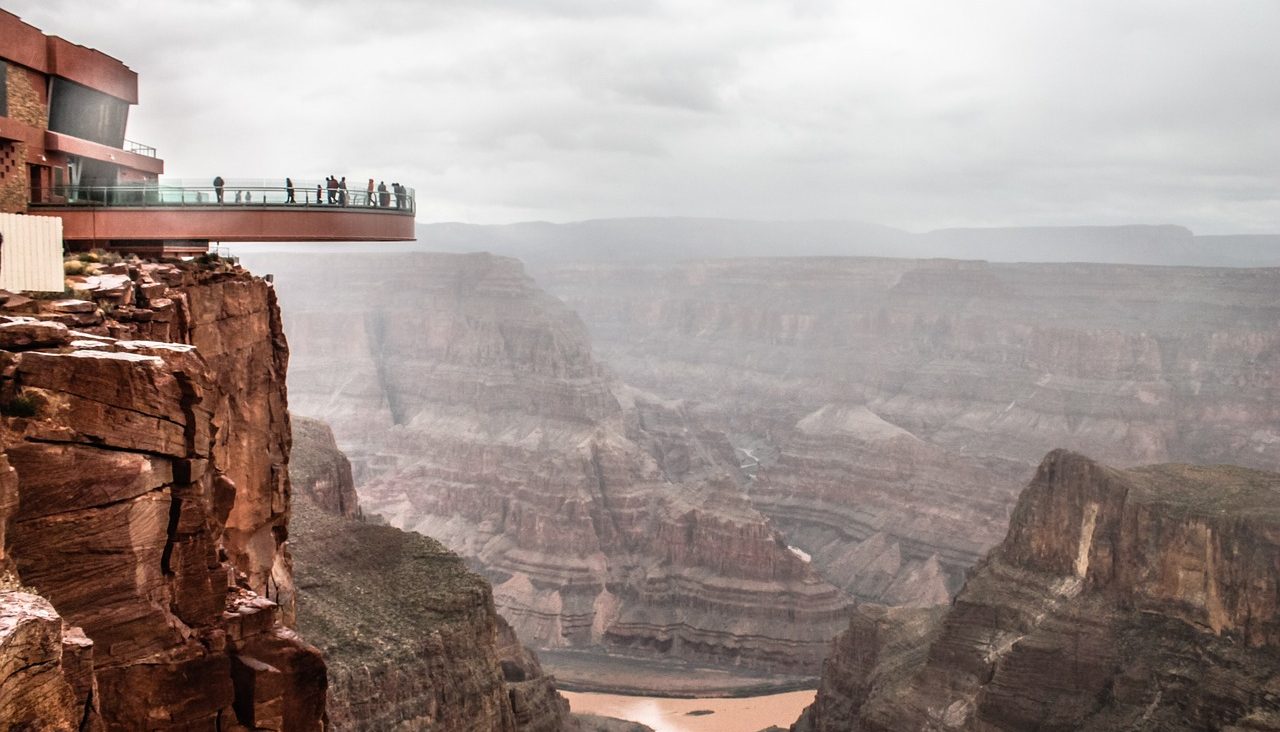 Spring and summer are the best times to visit the Grand Canyon.  During early spring you may run into some snow, sleet and cold conditions on both the North and South Rims.  Summer temperature on the South Rim  are usually pleasant, ranging from the 50s to the low 80s, but the North Rim temperatures are always cooler due to its elevation of 8,000 feet.

Temperatures in the Canyon can be extreme and temperatures along the river (5000 ft (1500 meters)) often exceed 105f in the summer, so if you want to descend to the Colorado River, you might want to try this in May or June, rather than July or August. Thunderstorms are common during July, August, and September. Winter conditions can be extreme on the South Rim and you should be prepared for snow, ice, sleet and icy roads and trails, along with possible road closures. We have run into snow at the South Rim as early as October and as late as May, even though it does not last long towards the end of spring.

The North Rim is closed from to the Public from the first heavy snow in November (date varies) or early December to mid-May.  In essence, the severity of the weather limits access to the North rim from the end of October to mid-May , though the exact dates will vary based on the weather.  We have found September to be exhilarating at the North Rim, but if you are in the area and it is open, you should stop an see it.

If at all possible, try and make a reservation in the Grand Canyon Village.
Xanterra Parks and Resorts offers seven different lodging opportunities inside of the National Park.   Take a look at their website for a review of inside-the-park lodging opportunities or to make reservations online. Staying at the Grand Canyon Village is a great choice for easy access to the Canyon.

Phantom Ranch, the only accommodation in the Canyon has dorms for hikers  and cabins for those who travel via the famous mule ride  into the depths of the Grand Canyon.  The mule rides are often booked up a year in advance, so if you would like to take this adventure, think far in advance.

Other lodging with access to the South Rim is available in nearby Tusayan (6 miles), Williams (60 mile),  and Flagstaff (78 miles).

Food service is available at most of the lodges in the park and groceries are available at the general store.

The Grand Canyon Lodge is the only lodging inside the Grand Canyon National Park on the North Rim and is always booked in advance.  If you hope to stay there and want to find out about the hotel, click  for more information.

Other lodging is available at the  Kaibab Lodge 18 miles north,  the Jacob Lake Inn 45 miles north, in Fredonia (77 miles) or at  Kanab (89miles).

When you are through visiting the park’s South Rim, you could plan a stop in Sedona (114 miles), a quiet town know for its delightful scenery, relaxed atmosphere, new age orientation and numerous interesting art galleries. The town’s official tourism website is quite helpful.

Petrified Forest National Park, is 200 miles to the east, near the border with New Mexico.   the park is in the Painted Desert  which provides a beautiful background for the park’s unusual petrified wood (trees that were once buried in sediments whose chemical changed them into stone over time).

To the west of the Grand Canyon National Park is  the Grand Canyon Railway, which operates out of Williams, Arizona, about 30 miles west of flagstaff.   The Railway operates  a 65 mile trip the South Rim of the Grand Canyon that takes approximately 2 hours and 15 minutes each way.  If you or your kids like rail travel, this is something you should investigate.

Also to the west of the national park is Grand Canyon West, a part of the Hualapai Indian Reservation and the home of the SkyWalk, a horseshoe-shaped, see-through-the-bottom, glass bridge extending 70 feet beyond the rim of the Grand Canyon and 4,000 feet above its floor.  Grand Canyon West is not part of the National Park.  A variety of activities are provided (river rafting, helicopter rides that can land near the river, hiking, etc.) and since this is closer to Las Vegas than the national park, it is becoming a popular location for those coming from that direction.