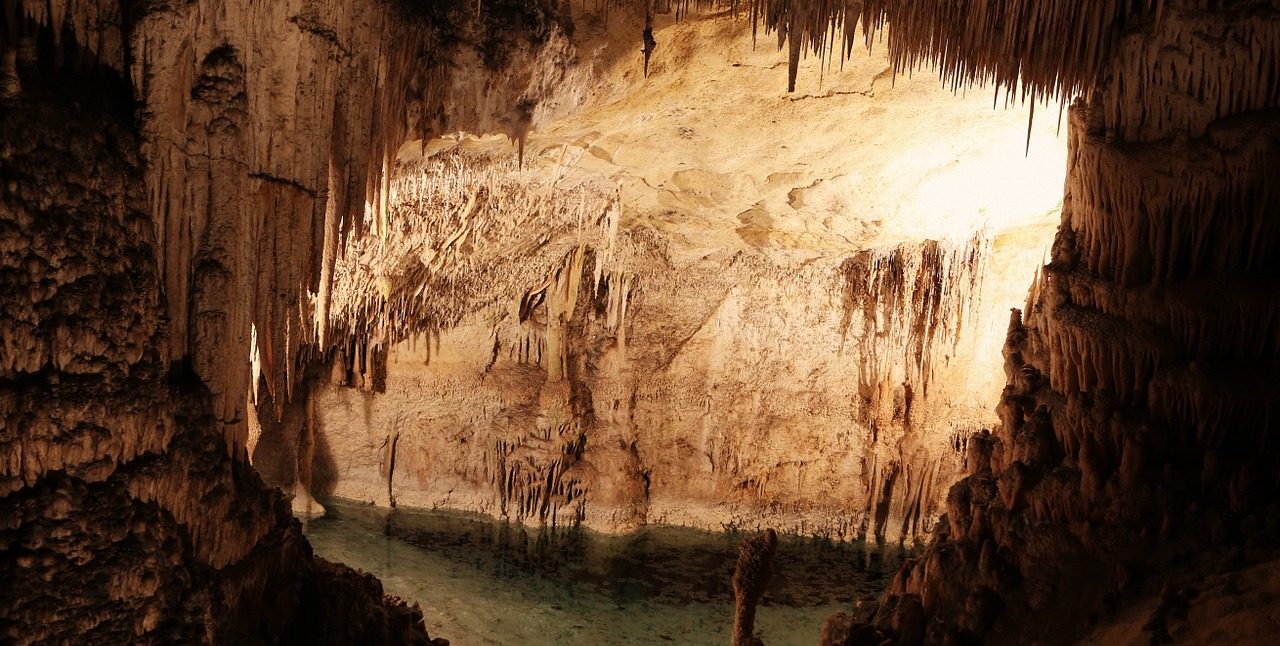 The Carlsbad Caverns National Park is located in southeastern New Mexico. The park sits astride the Guadalupe Mountains, a lowland chain of hills and modest mountains that run from southeastern New Mexico into west Texas. The area is part of the Chihuahuan Desert and its vegetation is scrubby, sparse and adapted to aridity. Underneath the surface, the area is riddled with hundreds of caves, although the Carlsbad Cavern is most well-known.A large portion of the surface is underlain by a fossil reef approximately 300 million years old.  The Carlsbad Caverns were formed when the area was uplifted, allowing water to mix with brine that originated from local oil and gas deposits.  The combination of fluids created a sulfuric acid mix that dissolved the limestone and created an underground network of caves.

The park is a wonderful mix of massive subterranean chambers and smaller caves, all containing exotic features that rarely exist in an environment as accessible as the one at Carlsbad Caverns National Park.  More than 30 miles of caves have been explored and the deepest is over 1,000 feet below the surface, but only a limited number of the caverns are open to the public.  However, the areas you can explore are incredible and unique to those of us who spend most of their time on the surface.

Entering the Carlsbad Caverns can be accomplished in one of two ways. The most interesting route is called the “Natural Entrance”, a one and a quarter mile path, which slowly descends over 750 feet to the major viewing area called the “Big Room”.  The  alternative route followed by many visitors relies on  a bank of elevators that whisk you down  to the “Big Room”, while avoiding the long, downhill trek of the Natural Entrance.

The Natural Entrance trail is a steep 1¼-mile (2 km) trail from the cave entrance to the Big Room.  The descent is equal in height to a 75-story building and follows the traditional explorers’ route to the caverns.  This one-hour walk is recommended only for those in good physical condition.

If you choose to follow the Natural Entrance, you will see many famous features including the Bat Cave, Devil’s springs, Green Lake Overlook and the Boneyard, an area of dissolved limestone that looks something like Swiss cheese.  You will, also, see Iceberg Rock, a 200,000 ton boulder that fell from the cave ceiling thousands of years ago.  The route ends near the elevators and the start for route through the Big Room.

The Big Room Trail, which contains many of the park’s greatest treasures, may be accessed from either the elevators or the bottom of the Natural Entrance trail.  Depending on your interest, allow one hour or more  to navigate this walk. A short-cut is available that reduces the length and duration of the walk by half.  The path through the Big Room is paved, relatively level and well-lighted.

The route through the Big Room is approximately one-mile and self-guided. We recommend that you rent the Audio Guide as the recording provides an excellent description of the unique features along the path.  As noted above, the route will take approximately one-hour to traverse and you will pass by many  famous features, both large and small.  Names like the Bottomless Pit, Giant Dome, Rock of Ages and Painted Grotto are apt descriptors for the features that you will see.  The Big Room is extravagantly decorated with stalagmites (dripping causing icicles to form from the ground up) , stalactites (icicles forming from the ceiling down), the aptly named “soda straws”, “draperies”,  columns and more unusual features made from drips containing calcite “absorbed” from the limestone that  the percolating water passed through.

In addition, there is a guided tour of the Kings Palace (fee based) that takes you to the deepest part of the park open to the public. There is some relatively steep climbing involved, so check with the park’s website for further details on accessibility.  Other tours are also available.  Refer to this page of the park’s website  for details on the tours and information for making reservations.  Most guided tours have limited space available, so make your reservations for guided tours as early as possible 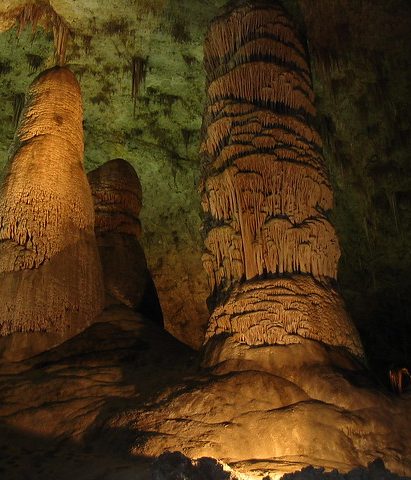 Carlsbad Caverns National Park is open year around, except for Christmas. From Labor Day (in the beginning of September) to Memorial Day (near the end of May ) the Visitor Center is open from 8 a.m. to 5 p.m.  The cave opens at 8:30 a.m. with the Natural Entrance closing at 2 p.m. The last elevator to the Big Room is at 3:30 p.m.

Reservations are not needed to visit the main cave (Big Room). Tours are offered for the Hall of the White Giants, Kings Palace, Left Hand Tunnel, Lower Cave and Slaughter Canyon Caves. The cost of these tours is in addition to the general admission ticket. Details about the tours, their cost and the ability to book online can be found at the park’s website on this page.

There is a Bat Flight program (mid-May through mid-October) when you can observe the half a million or so bats that make the Carlsbad Caverns their home leave for night hunting. Cameras are not allowed at the Bat Flight Program, as the flashes and electronics cause havoc with the bats’ navigation system. For more information on the Bat Program see this link.

Medically prescribed canes are allowed in the Natural Entrance (but not recommended), Main Room, and King’s Palace Tour, but are not allowed on the Hall of the White Giant, Left Hand Tunnel, Lower Cave, Slaughter Canyon Cave, and Spider Cave tours.

Strollers are not permitted, so if you have a baby, you may need to bring a backpack or other type of carrier. Children 3 and under are not permitted on any of the guided tours provided by the National Park Service.

There is no campground available at the park and overnight parking is not allowed.  You can camp in the backcountry with a permit that is available from the Visitor Center.  There are commercial campgrounds nearby in the city of Carlsbad and at Whites City.

The main interest here is the Caverns, which have the same climate year round.  Summer is a popular time for visitors, but if you have a choice, spring or fall are great times to visit due to smaller crowds.  Be sure to bring a jacket as the caves maintain their own temperature around 56 F.

The roads in the area can be icy in winter, but this is a relatively rare condition.  There is a  one-hour scenic drive through the Chihuahuan Desert along a ten-mile gravel road.  We think you will find this drive daunting and dusty in the heat of July or August.

Carlsbad Caverns National Park is located in southeast New Mexico near the Texas border and not far from the state’s border with Mexico.

If you lodge in Roswell, take some time to view the International UFO Museum Center  (located in an old movie theater) that is dedicated the controversial claim that aliens crash-landed a space ship near Roswell in 1947. The museum is touristy but fun – and if anyone knows you were in the area, they will ask if you visited.