When you arrive at Bryce Canyon National Park it seems as if you have entered  Wonderland. The unusually shaped pillars of rock are called “hoodoos” and they do seem to cast a spell on the visitor. Their shapes and sizes come in thousands of variations, accompanied by a dizzying array of colors.   Shades of brown, orange and red occur in so many variations as to be unnameable.

The layers of rock in this park are part of what is called the Wasatch formation,  although it is popularly known as the Pink Cliffs.   It is  part of an area known as the Paunsaugunt and Table Cliffs Plateaus.  Crustal faulting and erosion over ten million years have resulted in the scenic wonderland that we know as Bryce Canyon National Park.

Displaying over two thousand feet (650 meters) of vertical relief, the park experiences three climate zones including spruce/fir forests, Ponderosa Pine forests and Pinyon Pine/juniper forests. The range of zones promotes biodiversity. Over 100 species of bird inhabit the Bryce, as well as dozens of mammals and thousand of plant species. Due to the clarity of the atmosphere near Bryce, it is one of the best areas in the United States for star gazing and amateur astronomy – so bring your binoculars or telescope, if practical,

As is usual for the National Park Service, Bryce has a marvelous Visitor Center that can help get you on track for a great visit, including a useful film that overviews the park.

Areas that you should see include these viewpoints: Sunrise, Sunset, Inspiration and Bryce. Rainbow point is also spectacular, if you have time. While you can drive to these overlooks during an 18-mile scenic drive of the park, you should take the time to hike along the rim or though one of the amphitheaters. If you prefer you can take a horseback or muleback ride through the area by Canyon Trail Rides, the only company licensed by the Park Services to perform this function. See this website for the official provider of  trail rides in Bryce (as well as in Zion National Park and the Grand Canyon). 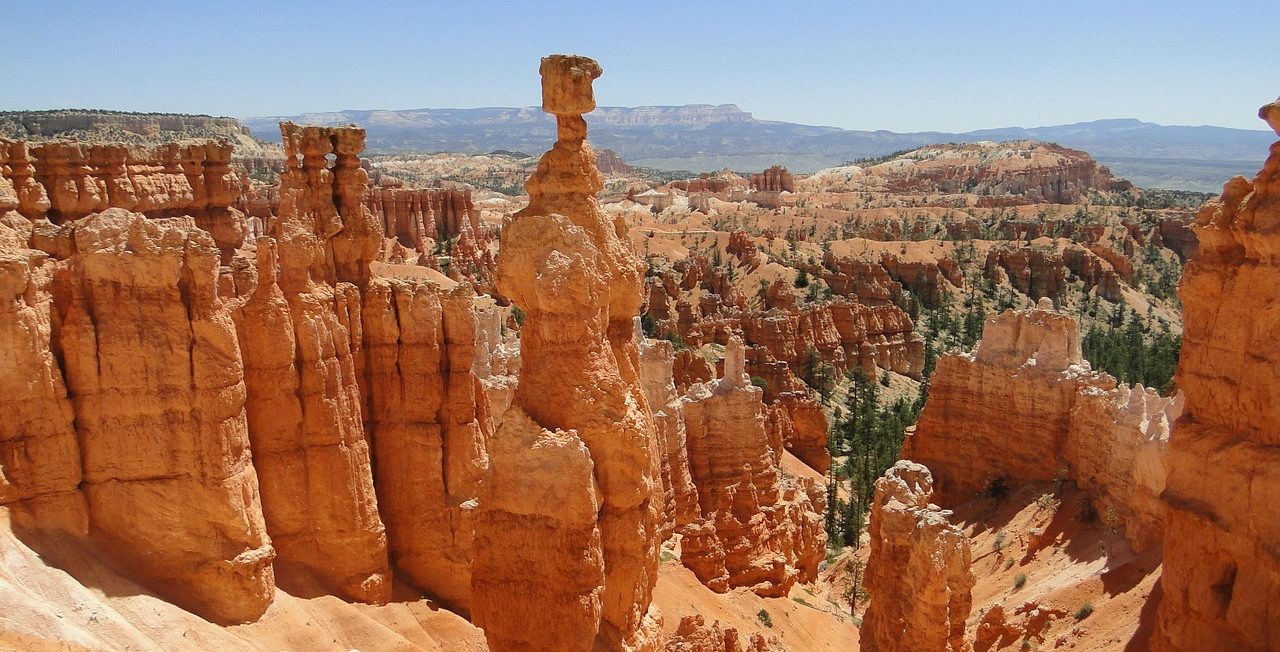 There are a large number of hikes available in the park.  If you are considering walking the canyons of Bryce, see its official website  for more detail

By the way, the name Bryce came from a Mormon settler named  Ebenezer Bryce.  Ebenezer apparently was not lured by the beauty of the areas amphitheaters. In a quote that is probably apocryphal, but humorous anyway, he is reputed that have said only this about Bryce Canyon “Helluva place to lose a cow.”

Most of the Park is at or above 8,000 feet elevation, so be sure you can handle the altitude if you choose to visit. As noted previously, much of the Park can be observed from the scenic road, but there is no substitute for hiking to see the details of Bryce Canyon’s amazing amphitheaters.

The entrance fee to the park is $25 per private vehicle, $12 for pedestrian or cyclist. Admission is for 7 days. Discounts are available for seniors (aged 62 and older).

Open year round, 24-hours per day. Roads may be closed on a temporary basis in winter due to storms and year round due to road maintenance. The Visitor Center and fee booths are closed on Christmas and Thanksgiving Day.

For those interested, the Park has a shuttle in summer, which, although not mandatory ,is highly recommended.

Bryce Canyon has two campgrounds, both near the Visitor Center.  More information on camping can be found in this section of the Park’s official website.

Normal precipitation varies slightly though the year and snow is possible from September through May.  The warmest months are June, July and August and these are considered by many as the best time of year to visit the Bryce Canyon National Park, although thunderstorm activity peaks in July and August. 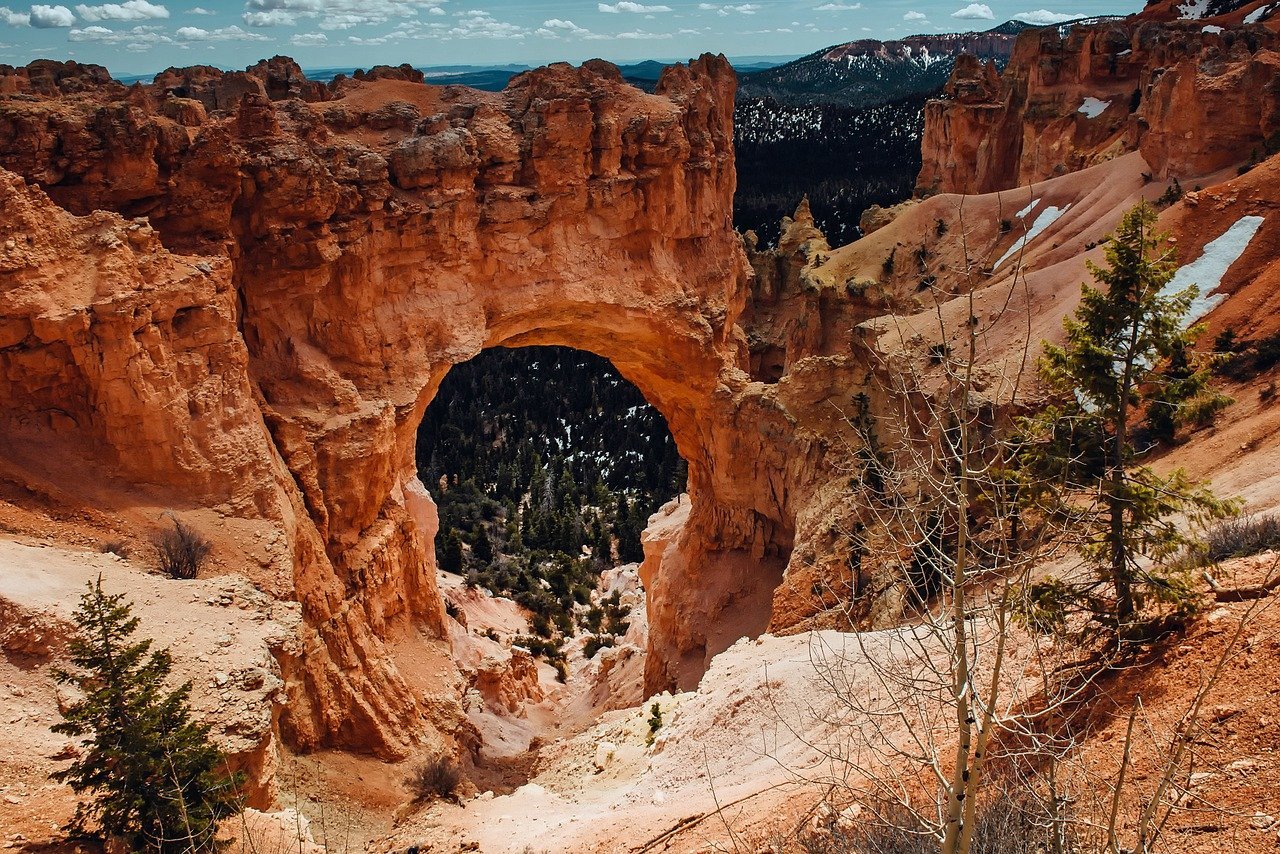 Lodging is available in the park from the Xanterra Parks and resorts which operate the Bryce Canyon Lodge from April 1 to October 31.  See this official website for more information on lodging including making online reservations http://www.nps.gov/brca/planyourvisit/lodging.htm.

The Best Western Ruby’s Inn, a landmark of sorts and located in Bryce Canyon City, is a favorite stop for many.   It is located relatively close to the park and open year around.  Other lodging is available in Tropic (12 miles),  Escalante (50 miles) and other local towns.

The North Rim of the Grand Canyon is approximately 160 miles south and if you want to see the  South Rim, you should know that it is a 300 mile drive from here.

Lake Powell and the Glen Canyon National Recreation Area can be accessed from Page, Arizona (156 miles south).  The access here is by boat and if you think there may be houseboat vacation in your future, consider spending a  a week exploring Lake Powell’s amazing scenery.  For more information on this delightful area visit the Bryce Canyon Country website provided by  the Garfield County Office of Tourism.