Places to visit when traveling to Lisbon

Between the  Praça Rossio and the Praça do Comércio  (on the Rua de Santa Justa), you will find the Santa Justa Elevator, a whimsical looking contraption designed by a student of the legendary Eiffel (see Photo to the right).

Take the elevator up the hill to the Convento de Carmo, which  has become the unofficial monument of the 1755 earthquake.  At the time of the earthquake, the Carmo was Lisbon’s largest church, but it was severely damaged during the event, losing its roof and some support structures. Visit its interesting, though small, archeological museum.

Further to the west (actually in the Barrio Alto but near the Carmo), you will find the church São Roque, one of the major highlights of a visit to Lisbon.

The church was damaged but not destroyed in the earthquake of 1755, so disregard the rebuilt but bland exterior and enter to see the beautiful and phenomenally expensive Chapel of St. John the Baptist. The chapel was built in Italy and shipped to Lisbon.

Each of São Roque’s chapels is beautiful, but based on different designs. We recommend this stop as one of Lisbon’s must-sees. If you are interested, there is a small museum to visit that has several of the church’s treasures, including a noted display of Baroque silver.

Lisbon has quite the reputation for being  a party town, and the Barrio Alto is known for its nightlife, restaurants and “Fado”. For many, the seemingly mournful Fado singers and songs, make for  slow night, as it is a form of music that must be “learned” to be appreciated.

Neighboring Chiado is an upscale shopping area that was severely damaged during a fire in 1988; new buildings have replaced the old and the area remains very popular.

Sitting atop a hill in the center of the city, the Castelo de Sáo Jorge (open daily) attracts the eye of every tourist who visits Lisbon. The site of the castle has been in use since Roman times and was a fortified palace during the Caliphate of the Muslims. Today’s castle is largely an enhanced tourist attraction with little of the original buildings still extant. Regardless, it is one of Lisbon’s main attractions, primarily for its beautiful views of Lisbon far below the castle.

The Castelo provides glorious, panoramic views of the city and the River Tejo. In addition, it provides a bird’s-eye view of the Alfama area, including the ability to see some of the fine gardens normally hidden behind courtyard walls. Remember, though, that since you can see the Castello from everywhere, you have to climb to the top of the and then ascend the castle to experience the fine views. 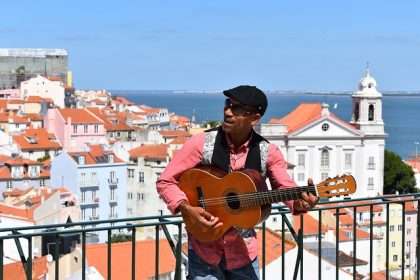 Wander out of the Castelo and into the Alfama, the oldest neighborhood of Lisbon and one that retains much of the city’s historical character.  You will find the Alfama to be a neighborhood comprised of multi-storied buildings combining shops and residences, red tile roofs, narrow winding passages, a blend of aromas from kitchens, and the ubiquitous, elderly Portuguese women dressed in traditional black.

Be forewarned, there are not a lot of notable tourist attractions in the Alfama. In addition, the Alfama is rough around the edges and not somewhere you should wander at night.

Most of the time, you will be climbing hills and wandering blind since it is very easy to lose one’s way in the Alfama. However, we think you will find this neighborhood enjoyable. You will find many restaurants offering local specialties and a several shops with interesting fine art for sale.

While in the area, you may want to consider visiting the Sé, Lisbon’s cathedral (open Tuesday through Saturday). It is not an outstanding or attractive building but does contain the relics of St. Vincent and other religious treasures in its sacristy, if these are of interest to you. Its cloister nicely offsets the drab interior of the Sé.

Most walks through the Alfama wind up at or along the river. If you still have some energy, follow its curve back to Baixa.