The “Romantic Road” has caught the attention of American, Japanese and Chinese travelers contemplating a trip to Bavaria (Bayern) in southern Germany.  Curiously, although the towns connected by the Romantic Road are well known to European travelers, the concept of the “Romantic Road”, remains something of a mystery to them and to most of the residents of Bavaria.

It appears that  the notion of a  “Romantic Road” was a post World War II marketing concept, originally aimed at American soldiers to cause them to bring their families to Germany for a vacation.  Eventually  the concept caught on with a wider audience.

The Romantic Road is an umbrella name that applies to a series of roads and highways that connect a string of towns in Bavaria that are often scenic, usually historic and almost always delightful to visit.  Quite honestly, it is the towns that are the attractions in the area, not the ‘road” that connects them.

It is unlikely that many travelers would be able to recite the names of the two dozen plus towns along the Romantic Road or even to have visited more than a few.  As with most areas, there are some outstanding attractions that merit your time and others that while interesting to visit, will not make or break your vacation.

As you may have concluded, touring the towns on the Romantic Road does not require driving the highways designated as the Romantic Road, unless you have decided that you want to see every town along this circuit.  As an alternative, we suggest you either drive between the towns using the assistance of a navigation device, or prepare by using routes from your favorite online mapping site.

You may want to wander this area, and if you do, be sure to bring an up-to-date paper map.  During our recent research visit to the area, we rented a Mercedes B class, with an in-dash system. as well as a TomTom unit that we brought from home.  Both systems were helpful, although both gave us wrong directions more than once. So, be sure an take a good quality paper map for backup

For the most part, the towns of the Romantic Road are small, and even the largest (e.g. Augsburg and Wurzburg) are modestly sized.  The treasures that many of these towns can claim range from the spectacular (e.g. the Residenz in Wurzburg) to the modest and in many cases (e.g. Dinkelsbuhl).  Most often, it is the town itself that is the treasure and not just the attractions it contains.

If you are going to vacation in the towns along the Romantic Road, be prepared to do some walking when you arrive, as exploring the unique look and feel of these towns and villages is one of the main reasons for visiting them.  We suggest you make a base in one of the towns and make day trips to the surrounding attractions.  Using two towns for bases over four or five days should allow you to see the best of the Romantic Road.

The Romantic Road travels through scenic landscapes in a highly agrarian section of Germany.  Tidy farms and neat fields are usually just a few minutes away from most destinations and the restaurants in many towns serve cuisine made from local produce and meats.  You won’t run into a shortage of good food in this region.  As you might expect, you will encounter a broad selection of hearty Bavarian food and rich sauces will be served on just about everything.  On the other hand, we, quite unexpectedly, found some excellent pizza and Italian food in this area. 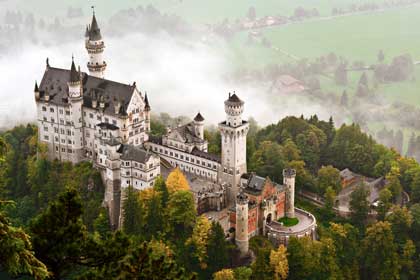 Although a number of towns along the Romantic deserve you attention, it would be impossible to visit all of them in the time most travelers have for a vacation.  We think that the leading destination on the Romantic Road is Rothenburg ob der Tauber, although more travelers visit the Neuschwanstein Castle in Hohenschwangau. Wurzburg and Augsburg are standards of the Romantic Road and we would add Ottobeuren and Dinkelsbuhl as places that deserve a visit.  Our guide to the Romantic Road covers all of these locations in detail.  So choose one from the selection in our menu to the right and get ready for a wonderful tour of the Romantic Road.We provide a map showing the locations of  the towns we cover on the Romantic road and the map can be used to create routes between the towns. We provide detailed city maps for Rothenburg ob der Tauber, Augsburg and Wurzburg on the pages describing these towns.  Hohenschwangau, Dinkelsbuhl and Ottobeuren are small enough that if you can find the town, you will have no problem finding its sights.

In most of these towns, you will easily find the tourist office and most of these have excellent, free maps for walking the town.  In addition, many hotels stock these maps and will gladly provide you one during your visit.

The best way to see the towns along the Romantic Road is to rent a car and explore the areas of interest to you.  Not all towns on the Road have rail services. A tour bus (the Europabus -which you can hop-on and hop-off) connects some of the major attractions and you can find more about it here.

Lodging opportunities are plentiful along the Romantic Road, but it is a popular tourist destination, especially in summer.  If you are interested in staying in one of the towns we recommend (especially Rothenburg ob der Tauber and Hohenschwangau), be sure to book ahead.  Numerous hotels can be booked online, while some can only be reserved by contacting them directly.  There are some spectacular places to stay in this region and you will have to do a little research to find them.  Of course, that’s part of the fun of planning a trip.

As you travel the Romantic Road, you will find that its towns all have some connection to the Thirty Years War.  Since the effects of this epic war are a common  theme of the towns in this area and an important fact of German history, we have prepared a summary of the event, its causes and affects.

The Thirty Years War (1618 – 1648) was a series of wars that marked a changing power structure in Europe and those interested in exploiting it.  Initially a religious war that began as a conflict between Protestants (Calvinists and Lutherans) and Catholics in the Holy Roman Empire, the conflict later became more a politically oriented disagreement between the Bourbons and the Hapsburgs.  Besides Germany (which was not a unified country at the time), France, Spain, Demark and Sweden were involved as major players, but at different times during the war’s prolonged extent.

The Majority of the wars and major battles were fought in German territories. The Thirty Years War devastated the most German cities,   decimating their populations and ruining the region’s economy for many years after.   Numerous towns never recovered their pre-war stature; others fell into disrepair and ruin.

The result of the Thirty Years War was a realignment of power in Europe.  France became the dominant power, while Germany was reconstituted into a series of territories that were relatively independent of the power of the weakened Holy Roman Empire.