Rothenburg ob der Tauber is considered one the best-preserved medieval towns in Germany.  The city is located on the edge of a plateau, elevated above the scenic valley of the Tauber River.  The city’s modestly sized Old Town, surrounded by its encircling wall and gated towers, is one of the most popular stops on the Romantic Road.

Visitors flock to Rothenburg because of its reputation as an “authentic”, walled medieval town.  Historic is, perhaps, the most appropriate description.  Rothenburg, which dates from the 12th century, was a noted trade center and one of the most important towns in Germany during the ascendancy of the Holy Roman Empire.

The city and its Lutheran protectors were defeated in Thirty Years War and  Rothenburg was sacked by Catholic forces.  Several years later, the Black Plague ravaged its remaining population and the walled city slid into a decline that lasted for several centuries.  In the early 20th century, Rothenburg experienced a re-emergence, but this time as a tourist destination.  Unfortunately, sections of Rothenburg (mostly the eastern part of the city and its wall) were destroyed by bombing in World War II and the rebuilding process, which took twenty years, started soon after the end of hostilities.

We think of Rothenburg as a medieval town that has made its peace with tourism and modernism.  The town is a delightful place to visit, but it is the combination of the town’s medieval ambiance and its people that make Rothenburg a worthwhile destination.  Its monuments are well kept, its stores are clean and orderly and service in its restaurants is prompt but unrushed.  Its shopkeepers, hoteliers, and restauranteurs (restauranteers to some), take the effort to make Rothenburg an enchanting place.  For more information on visiting Rothenburg, explore the city’s official tourism site.

Rothenburg is centrally located and a good place to base of visit for seeing other interesting towns on the Romantic Road.  Consider staying in the Old Town for a night or two to soak up all that Rothenburg has to offer.

The town is compact and you could see the most interesting attractions in a morning or afternoon, but the real beauty of the city comes out late in the day when the tourists and tour buses have moved on to their next destination and the town almost audibly breathes a sigh of relief.  Moving around the town when it is not crowded, which is an impossibility on any summer day, allows you to experience the “real” Rothenburg and imagine what it was like to live here in medieval times.   In addition, the numerous houses and lanes crisscrossing Rothenburg add to its ambiance.  Take some time to wander the city and its residential neighborhoods,  as doing so underscores the uniqueness of the city.

If you want more detail on what Rothenburg was like in the past, take the Night Watchman’s tour that departs at 8:00 pm from the Marktplatz (April through December). The Night Watchman is a talented performer whose  40-minute tour of the city is interesting, informative and humorous.  He wears a black outfit, covered by a black cape, a tricorn hat and sports various menacing weapons, most noticeably a halberd (a pole topped with a combination axe and sharp spike).  Having set the stage for his protection duties with a short introduction, it’s off to see the city and its history. Visit the Night Watchman’s website for more details. 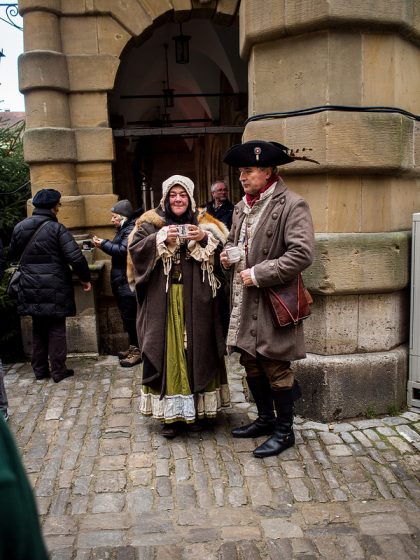 After its founding, the city grew beyond its original wall and towers and they were replaced by those you see today.  A remnant of the original walls and towers can be found along Rödergasse between the Röder Gate and the Markt, where the Markusturm (Markus Tower) and Röder Arch were built in the early 13th century.  (By the way, the building just south of the tower is the Romantic Hotel Markusturm. It is a delightful, though slightly expensive place to stay.)

Rothenburg’s outer wall (approximately one and a half miles long) and its towers are the town’s main attraction and you should walk at least part of the wall to experience its magnificence, and defensive value.

The views from the wall often provide stunning panoramas of Rothenburg (as well as its ubiquitous red-roofed buildings), close ups of the many towers and, at other times, intimate views of the multi-story houses that snug-up to the wall.  The small plaques embedded along the wall identify donors who supportedrebuilding the sections of the wall that were damaged during World War II.

There are a number of places to access the wall and all of them involve climbing stairs (some rickety and wooden, others stone and stable).  There does not appear to be wheel chair access to the walls.

We think the most convincing argument we can make for visiting Rothenburg and exploring its wall is to show you the scenes that you will see when you visit.