Ottobeuren is a delightful, spa-town in Bavaria’s Allgau region.  Although not strictly part of the Romantic Road, it would be a shame to miss this gem of a town when you are traveling the Romantic Road. Ottobeuren is surrounded by gently rolling foothills and beautiful, pastoral scenery.  Although the town is known for health treatments, spas, and celebrations of music, its Benedictine Abbey and Basilica (Benediktinerabtei Ottobeuren) draw visitors from around the world.

The Benedictine Order was very prominent in Germany in the Middle Ages and the Abbey at Ottobeuren was one of its largest monasteries.  The Abbey was founded, by the Blessed Toto, in the 8th century, but fires, wars and waning interest threatened the monastery’s future over the next 900 years.

In the early 18th century, the Abbey’s reputation was returned to its former stature by  the efforts of Abbot Rupert Ness. He initiated the plans to build the present Abbey structure and later the church that was to become a Baroque masterpiece and eventually a Papal Basilica.

During its re-ascension to importance, the Abbey regained its status as an Imperial Abbey, which made it a property of the emperor. This action relieved it of the duty to pay taxes, while allowing it to impose taxes.  The degree to which the Abbey prospered during this period is obvious when you tour the Abbey’s delightful museum.

Unfortunately, success had its price and the Abbey and its properties were annexed (secularized) by the Bavarian government at the start of the 19th century.  Although its independence was later restored by the king of Bavaria, the Abbey never recovered its former importance or standing. Today the Abbey is a priory and has gained fame for its internationally respected music program.

From a distance, one might make several suppositions about the basilica.  First, it appears to be quite large. Its two, semi-flattened, onion-domed towers reach for the heavens and from a distance, the body of the church appears to merge with its abbey.  Next, it appears that the lower course of the cathedral is comprised of blocks and greenish colored block at that. As once comes closer, the green block seems to form the backdrop for the churches external columns. 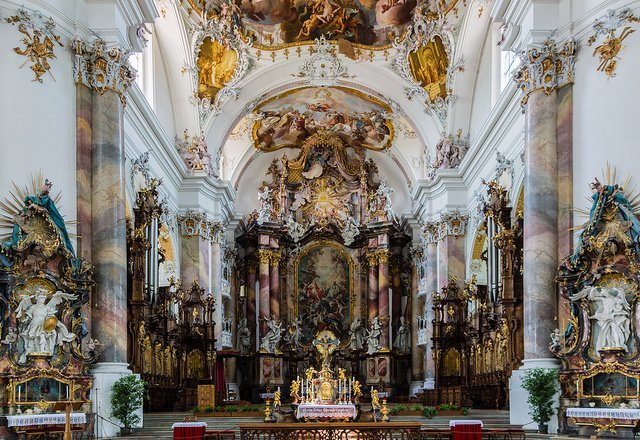 Upon further inspection, you will notice that all of these misconceptions are a case of Trompe l’oeil (“trick the eye”) as the building’s exterior surface is smooth and the “blocks” and their dark channels are painted onto the building’s surface.  The use of the technique of Trompe l’oeil in the interior of churches of  Baroque design, like the Ottobeuren Basilica, is relatively common.   Exterior use  of this technique is slightly unusual but a mark of the Benedictine Order.

The Basilica, especially its interior, is regarded as the apex of the Baroque movement in southern Germany and it appears a crowning achievement.

The interior appears as a choreographed work of art.  The entrance merges seamlessly with the body of the church and the compelling design immediately steals the eye. Everywhere you look, there is decoration, blending with the white walls of the interior.  The main altar is a delightful combination of marble, frescos and the putti (small winged, babies) and cherubs can be seen dancing everywhere in the basilica.  There are a number of side altars that contend with the main, in terms of beauty, if not size. In addition, surrounding the central crossing are four reliquaries, each with its own clothed skeleton behind glass and topped with a mini-altar.

The ceiling with its domes, frescos and stuccowork is amazingly complex and yet the scenes flow together as if a unified tapestry.

A large, Steinmeyer organ occupies the choir at the back of the church, but the real treasure lies in two organs by the famous organ maker Karl Joseph Riepp in 1766.  The Holy Trinity organ is to the right of the main altar, while his second (the Holy Spirit organ) is in the Monastery.  Organ concerts in the basilica are offered late Saturday afternoon.

It is hard to imagine that anything in Ottobeuren could trump the Basilica, but, in our opinion, the masterful Abbey Museum (Museum der Benediktinerabtei Ottobeuren) is even more stunning, and perhaps of greater importance.  Initially, we were doubtful about taking the time for a look, but the entrance fee was at bargain basement levels and we could not resist. 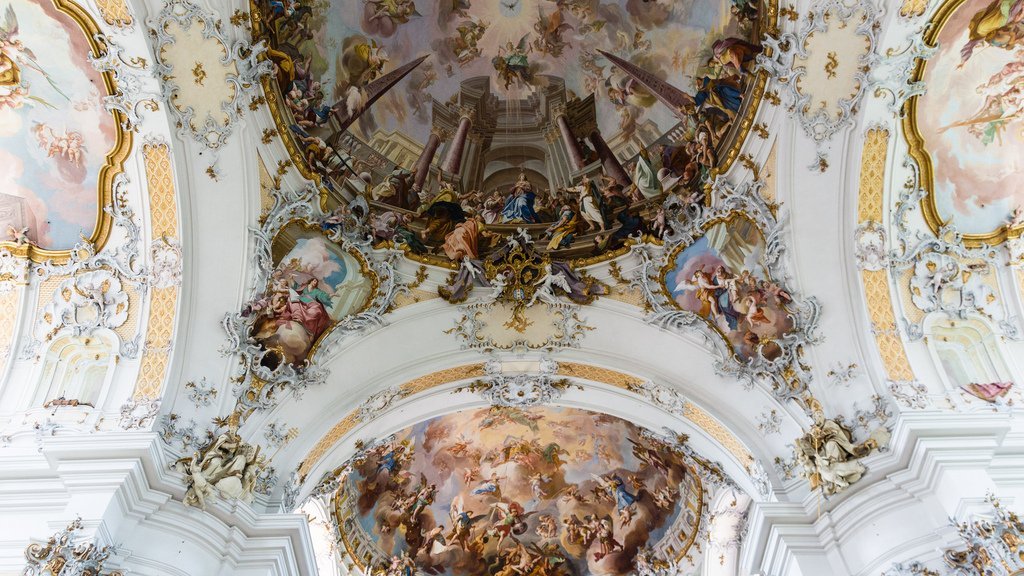 The Museum occupies the portion of the abbey that housed the Abbot’s Palace and it is clear that it was good to be the head abbot, as his rooms were sumptuous, comfortable and numerous.  Today they are filled with a number of interesting treasures.

Although photos and movies cannot be taken of the interior, the Museum offers a unique collection art and artifacts demonstrating the history of the Abbey.  The furniture collection (especially the cabinets used for apothecaries and document storage) is outstanding and the wood crafting  that is displayed in a wide variety of everyday objects, is of excellent quality.  Other rooms of the Museum are focused on art, though a considerable portion of it is not focused on religious themes.  Most rooms feature ceiling murals and the details of the room design are incredible, as are the objects on display. 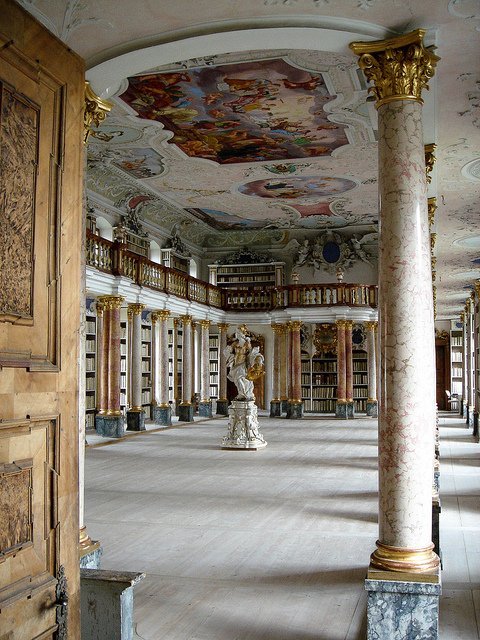 The library on the second floor is a dazzler.  Although you can only view the room from the entrance doorway, it is a small, bright space that looms large. Its space is accentuated by rows of double marble columns with gilded Corinthian capitals that support a bookcase-laden balcony that extends around the edges of the first floor.  The ornate frescos are bright, complex and beautiful, while the stuccowork in the room is masterful.  The overall presentation of the room is one of splendor and wealth. A statue of Minerva (or what appears to be  Minerva – it can only be seen from the back) graces the center floor of the room.

After touring a number of halls with interesting, religious art, we unexpectedly stumbled onto a misplaced room that contained an odd, but interesting collection of miniatures.  Several featured the Nativity, while other featured soldiers, battles and scenes from everyday life.  In the center of the room was a small but interesting display of children’s clothes from the 1800s, principally dress collars and sequined slippers.

Near the end of the Tour you will enter the Kaiserhall (room 19) which touts some gorgeous frescos, sixteen detailed statues positioned along the room’s edge and other works to numerous to mention.  Faux marble pillars are featured throughout the room  and along the sides of its fireplace.  The Kaiserhall is colorful and visually stunning. Its highly ornate ceiling replete with cavorting putti present an incredibly impressive room. Along with the Basilica, the Kaiserhall is the used for concerts.

Your tour of the Museum will take slightly over an hour.  Allow more if you really want to dig into the details of each of the rooms. The Museum closes between 12 and 2 and is not available on holy days and other holidays.