The town in known for its elegant patrician houses and impressive mercantile buildings dating from the 15th and 16th centuries. 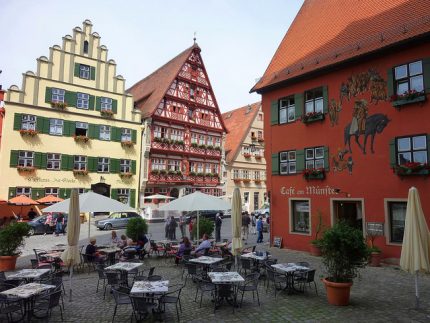 The town’s treasures are mainly architectural and Dinkelsbuhl is world famous for its fortified wall and sixteen towers, four of which provide access to the city. The wall, which surrounds the Old Town, is interesting in itself and we recommend walking its perimeter for some dazzling sights.

The city was settled over twelve-hundred years ago and evidence of the first fortress dates from the 10th century.  During the succeeding centuries, the town prospered while becoming a noted center for the production of fine cloth.

During the Thirty Years War (1618 – 1648), Dinkelsbuhl (also spelled Dinkelsbuehl) and its walls were partially destroyed, but the capture of the city by Swedish forces in 1632 protected it from further damage.  Somewhat remarkably, the city emerged unscathed from World War I and II and is today one of the finest examples of fortified, walled, German towns. (This, in part, was due to the foresight of the Bavarian King Ludwig I, who, in the early 19th century, issued a proclamation forbidding the destruction of the town’s wall and towers.)

Although not as popular as the physically larger Rothenburg (another historic walled city in Bavaria), Dinkelsbuhl is well worth a visit.  The highlights of the town can be covered in an afternoon, but you may want to overnight here, as the Old Town offers some delightful hotels.  Dinkelsbuhl has no shortage of good restaurants and afterwards you may want to participate in the tour of the town offered by their Night Watchman.

Although you can park within the Old Town except for Sundays, parking is limited and cramped. There are several parking lots outside of the walls and we recommend that you park in one of these, especially since the best views of the town’s walls are from the outside of the city.

The wall incorporates 16 towers, but only four allow for access into the city.  The Wornitz Tor is the oldest of the city’s four gates. It was modified by increasing its height in the 14th century and a bell tower was added in the 16th century.  If you choose to enter the city from the Romantic Road (B-25), this is the gate you will drive underneath as you pass the wall.Click the movie player below for our narrated slide show of the sights in Dinkelsbuhl.

St. Georges Minister (mid-15th century) is the town’s most distinguished landmark and is considered one of the most beautiful of the wide-aisled hall churches in Germany (built without a transept).  It is used for services on Sundays and open most other days, except between the hours between 12 and 2. Ascend its tower for panoramic views of the city. By the way, St. Georges is visible from most parts of the city, so use it as your landmark for finding your way around the town.

The area around St. Georges is known as the Market Square.  Directly across from St. George’s is known as the Wine Market and the late renaissance facades you can see here are among the most beautiful in the city.  In the middle of the block, the Deutsches Haus, is a building with a very impressive facade.  Today the building is a noted hotel and restaurant

You will walk by numerous bakeries, restaurants and outdoor cafes during your tour of Dinkelsbuhl, so consider picking up a treat for a picnic or dine at one of the city’s many outdoor cafes and enjoy watching others explore the city.

The Tourist information Office offers guided tours in the mornings and afternoons April through October.  The tour starts at the St. Georges minister (the town’s most visible landmark) and the town’s Information office is just down the street from the Marktplatz.

Carriage rides through the Old Town are available. They will take you through the historic old town on a circuit that lasts approximately forty-minutes and are a great way to see the sights.