Travel and Tourism in Amsterdam Part 2

Travel and Tourism in Amsterdam Part 2

The Rijksmuseum, located at the Museumplein,  emerged from a ten-year renovation in mid-April, 2013.  The Rijksmuseum now has a completely new interior to explore and it looks to be a fascinating adventure.

The museum’s collections of art, includes famous paintings by Rembrandt (The Night Watch), Vermeer (the Milkmaid) and other masters. Furniture, pottery, statuary and numerous examples the beaux-arts from the many important periods of Dutch history are all on display in an enchanting “new” venue.  Curiously, part of the museum has been constructed underground, so that the construction did not detour an important route for bicycles.  While the Netherlands has had a life-long battle with sea level (most of the country is below it), putting the treasures of the art world in potential peril seems a bit risky to us.The Rijksmuseum is one of Europe’s great museums and is a must see if you visit Amsterdam.

Note that there are small, garden areas on each side of the Rijksmuseum and on sunny days these are pleasant places to take a break and watch the world go by.

Visitors in wheelchairs may use the entrance located next to the main entrance at Jan Luijkenstraat 1. All of the rooms in the museum are wheelchair accessible.

See the Rijksmuseum official website for information on visiting.

There is a branch of the Rijksmuseum at Amsterdam Schiphol Airport behind passport control (between the E and F Piers).  See it, if you have a long wait between flights.

The Dam and Royal Palace

The Dam is a short walk from the train station. It is a large, unremarkable square in front of a  historic building that is now a Royal Palace and was formerly the Town Hall.

The Dam is the designated “place to meet” in Amsterdam due to its size and closeness to many of the city’ attractions, bars and restaurants.  It is usually crowded, especially on weekends. Later in the day on weekdays and most anytime on Saturday, street performers frequent the Dam.  Some of the acts are humorous and all are entertaining.  In addition, a  popular shopping area starts just south of the Dam along Kalverstraat and extends for several blocks.

The Royal Palace is now open for touring, after having been closed for several years for renovations.  The Palace is supported by over ten thousand  wooden piers (pilings) that help distribute the weight of the large structure over the soft, marshy landscape in this area of the city. The building was originally the Amsterdam Town Hall (1655) and became a palace in the 19th century.  See the this official website for more information on visiting.

The main road from the Centraal Station to the Dam is the Damrak. Between the Damrak and the canal Achterburg, in an area surrounding the Oude Kerk, you will find Amsterdam’s famous Red Light District.  At night, the area is a bastion of neon, bars, partying and crowds.  It is one of the few places you will visit where you might happen to look up and see what looks like a department store window filled with compartments and women modeling lingerie in them – well, that’s not actually what is being sold.If you think you would like a walk on the seamy side, perhaps the red light district is for you. As a matter of fact, almost every tourist who visits Amsterdam take a  brief walkthrough, just to see what it looks like. Avoid the Red Light District in the late, late evening as druggies and drunks seem to dominate the area.  If you are in town to party, late evenings here seem to be very popular, but traveling with a group is recommended.

The Amsterdam city council is trying to clean up the image of the Red Light District and has considered banning some of the more obvious displays advertising prostitution. On the other hand, prostitution is considered by many  to be one of the area’s signature calling cards.  It’s not that most tourists are interested in the services, but many seem to want to experience the atmosphere of this over-the-top Red Light District. 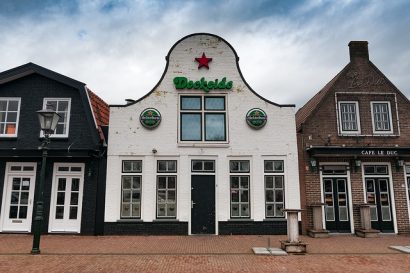 The world-famous Heineken Beer was first brewed in  Amsterdam in 1863 and the city is the home-base of this iconic brand.

The Heineken Experience is not a brewery tour in the formal sense, but closer to a Heineken theme park than anything else.  Clearly stating that the attraction is an “experience”, not a museum, Heineken has converted a former Heineken brewery into a multi-story “World of Heineken.”

The interactive tour takes about an hour and a half. Since the tour is self-guided you can start whenever you arrive.  Of course, you will get to sample some brew, learn a few tidbits about the brewer’s art, and have a great time in the process.  For more information and to make reservations, see the Heineken Experience website.

The Heineken Experience is located at Stadhouderskade 78 in Amsterdam.  If you choose, you can arrive by boat and disembark at the front of the brewery.  Alternatively, from the Central Station, take the tram (lines 16, 24, or 25) and exit at stop “Stadhouderskade.”

The Heineken Experience is accessible by wheelchair.