This section of our London, England City Guide describes the best places to visit in London’s Tower Hill.

The Tower of London is the premier attraction here, although many continue on to explore the Tower Bridge. Most travelers, are content to view this handsome Bridge and feel little need to see it close up

The Tower of London 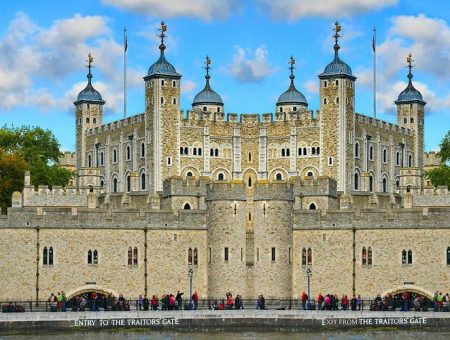 The Tower is one of London’s most popular attractions and for good reason. It exposes important history, houses the Crown Jewels, and offers more medieval armor than you can see anywhere else.

William I (William the Conqueror) started construction of a fortress here in 1066, after the Norman victory at the Battle Hastings,  as part of his strategy for controlling both his new subjects in London and depriving access to England from the Thames by his enemies abroad.

Originally, the section of today’s Tower of London known as the “White Tower” was the entire fortification. The name “White Tower” was given to the core tower when it was whitewashed inside and out for preservation purposes during the reign of Henry III. The White Tower is  approximately ninety feet high and its walls, designed to repel ballista and cannon balls, are said to measure fifteen feet wide at the base and eleven feet wide at the top. The White Tower’s Chapel of Saint John the Evangelist is one of its most striking rooms.

The Tower of London as we see it today is an amalgam of building efforts that started in the Eleventh Century and additions, replacements and tinkering with the design occurred well into the nineteenth century. Residences, a new palace and new fortifications were just a few of the additions.  During its history, the Tower has served as a castle, residence, prison, mint and armory.

The Tower is, perhaps, best known for having been a prison for Princess Elizabeth (the future Elizabeth I), Sir Thomas More (St. Thomas More), Henry VI, Anne Boleyn (beheaded inside the Tower) and Sir Walter Raleigh, among others. The deaths of the sons of Edward IV (a teen-aged Edward V and his brother Richard the Duke of York) in the “Bloody Tower” are considered among the most famous intrigues occurring at the Tower, especially since their disappearance resulted in their “protector” (an uncle) being crowned King Richard III.

For many tourists, the greatest lure of the Tower is the Crown Jewels, a lavish and interesting collection of coronation ornaments and crowns. For others, the Royal Armories, which provide one of the best collections of arms and armor dating from Medieval times, are a significant attraction. In addition, in April of 2011, a new exhibition called the Power House opened, which showcases the role of major organizations of state that  once conducted their operations from with the Tower Walls over the centuries, including the Ordnance Survey.

Clearly, there is a great deal to take in at the Tower and you can easily fill an afternoon, if you see all there is to experience.

We recommend that you consider taking one of the tours with a Tower Warder (the Yeoman Warders) as a guide, it is one of the most informative ways to learn the history of the Tower in a short time. The tour is  enjoyable and usually filled with humorous stories and fun facts.

Finally, consider attending the Ceremony of the Keys, the ceremonial locking of the Tower that has been held every night for the last 700 years. See this official website for details on applying for reservations for the ceremony.

For more information on the Tower of London and its history, visit the Official Site of the Historic Royal Palaces.

The Tower Bridge (next of the Tower of London) is one of the most photographed images of London.  Constructed between 1886 and 1894, the Bridge was built with elevated walkways that allowed pedestrians to cross it while the Bridge was open to allow barge traffic along the Thames. The walkways are now enclosed and provide impressive views of London.

You will have to pay for access to the touristy “Tower Bridge Experience”, (including the walkways) a tour that will provide more detail, including videos about the bridge and its construction, as well as access to the  unique engines that were part of the original bridge lifting mechanism.

For more information visit the web site of the Tower Bridge Exhibition.