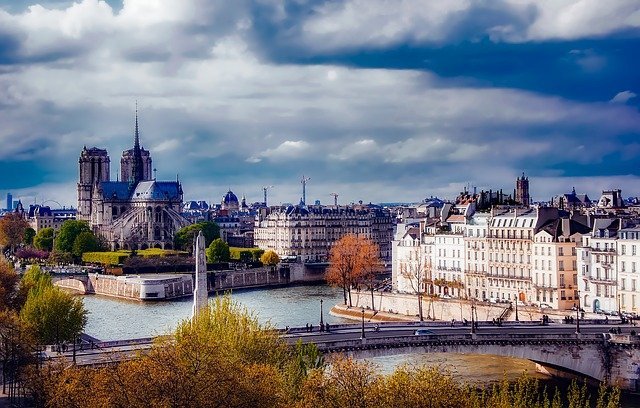 The city we call Paris has been settled for over two-thousand years. In the middle of the River Seine, two small islands,  called the Île de la Cité and Île de Saint Louis in modern times, were the center of Lutetia, a settlement that  existed for hundreds of years before it was captured by the Roman Empire in the Gallic Wars of the 1st B.C.The  Île de la Cité, the larger and more famous of the two islands, is dominated by the Notre Dame Cathedral and the famous story of its Hunchback, although  Marie Antoinette and  other famous Parisians have left their imprint on this  historic islet in the center of Paris.

This section of our guide to best places to visit  covers: the beautiful Notre Dame Cathedral, the Palais De Justice, including the small but impressive church Sainte Chapelle, and the darkly famous Conciergerie where Marie Antoinette was imprisoned.

Notre Dame and nearby attractions.

(4th arrondissement)  This quaint island offers great views of the Seine as it wanders through Paris. In addition you will find some of the most historic attractions Paris has to offer in this compact section of the city, but Notre Dame is by far the most popular, as well as the most interesting. 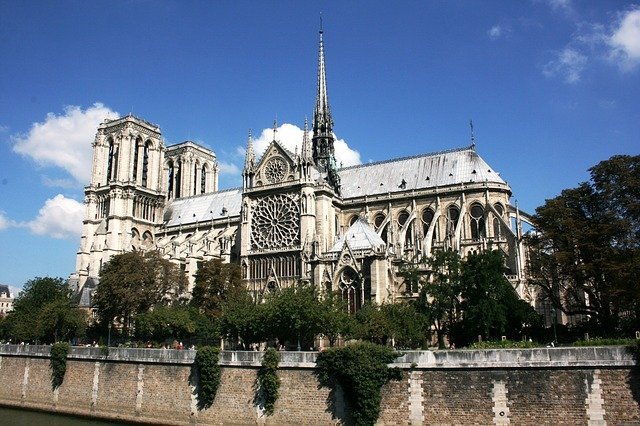 This stunning cathedral is one of the most popular attractions in Paris, with over twenty million visitors a year.  In 2013 Notre Dame celebrates its 850th birthday (March 23) with nine new bronze bells and one original bell.  The new bells  replace nine of the ten originals that were melted down and used to make cannons during the French Revolution. The new bronze bells were cast in Normandy using techniques from the Middle Ages. We hope they receive the Hunchback’s approval.

The grand Cathedral of  Our Lady of Paris was commissioned by Bishop Maurice de Sully in 1160 and  was a work in progress over several centuries.  After the start of the French Revolution in 1789, Notre Dame was a target of the Parisian revolutionaries because of the favored relationship that had existed  between the Catholic Church and the French monarchy.

The Cathedral’s soaring spire, the statues from the Gallery of the Kings and the statues at all major portals were destroyed by angry crowds in their revolutionary fervor. In addition, for a period of time, the cathedral became the property of the civil authorities.

Notre Dame was given back to the Catholic Church during Napoleon’s reign in 1802 and it was during the remainder of the century that  the church was restored to its former glory, although significant changes were made to  its exterior design reflecting architectural tastes of the time.  Notre Dame is still in use as the Roman Catholic Cathedral of Paris. 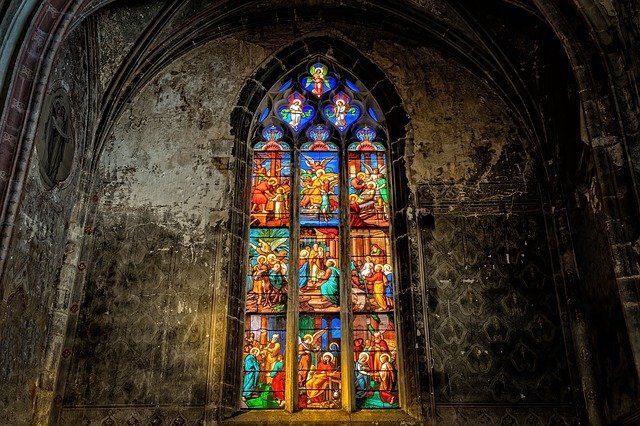 Notre Dame is an exceptionally impressive cathedral. Both the exterior and the interior of Notre Dame are endowed with numerous spectacular features, so do not make your visit a quick walk-by or you will miss many of the cathedral’s noted features.

Note that the unique look of the cathedral’s facade was heavily influenced by a restoration in the 1860’s. Most travelers approach Notre Dame from the West Facade, shown above.  The two towers date from the mid-13th century and rise over 200 feet (63 meters) from the ground.  The facade is famous for its simplicity in integrating a number of outstanding features, principally the large Rose Window (below left)  that forms a halo surrounding a statue of the Blessed Virgin, holding the infant Jesus, while she is in conversation with two angels.

Below the Rose Window is the Gallery of Kings, a series of 28 figures from the Bible, although the figures were actually rendered to represent  the Kings of France.  Below the Gallery are three entrance  portals, with the center portal, known as  Last Judgment Portal (photo above-right) taller than the other two.  Each portal is adorned with a number of impressive sculptures, although the Portal to the Virgin on the left (north) is the most popular with tourists.

Notre Dame was one of first great cathedrals to employ flying buttresses. These wing-like elevated arches transferred the load from the vault of the cathedral to a buttress (or pier) outside the building proper. 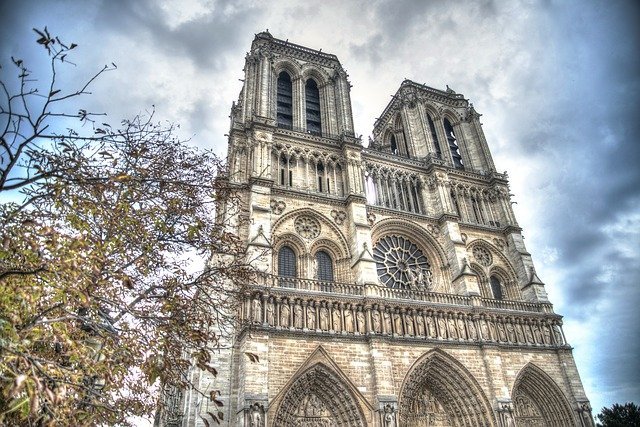 This architectural innovation allowed the construction of taller, lighter structures with less massive walls. In addition, the weight transfer allowed the creation of openings in exterior walls for large windows, which, without the presence of the flying buttresses, would  have made the walls too weak to support the load.  The beautiful stained glass windows at Notre Dame would not have been possible without this architectural innovation.

Notre Dame’s  flying buttresses can be seen along the east end of the cathedral, as shown in the see photo at the top-left of this page.

The Cathedral’s stained glass is a treasure, especially the West Rose Window (above the entrance) and the larger Rose Windows in the North and South Portals. Some of the glass in these frames and most of the designs are original and date from the early 13th century.

Several of Notre Dame’s precious liturgical objects can be viewed in the Cathedral’s Treasury in the sacristy for a modest fee.

If you have the stamina and interest, you can climb to the top of Notre Dame for a grand view of Paris that you will share with fearsome gargoyles. (Although we have never seen Victor Hugo’s Hunchback there, were are sure he must be skulking around somewhere close by.)  The walk is strenuous, requiring ascent of almost 400 steps and there is not an elevator.  The Tower  is available for visiting from 10 a.m. to 5:30 p.m. in winter and one hour later in spring and summer.  The last access is 45 minutes before closing and the Tower itself is closed on January 1, May 1 and December 25.  A fee is required for entrance to the tower.

The Cathedral of Notre Dame is open all year from 8 a.m. to 6:45 p.m. and 30 minutes later on Saturday and Sunday.  Access is free, but you are requested to be mindful of the religious services that may be held during your visit.

There were at least three precursor churches to Notre Dame and other buildings in the immediate area that were destroyed or built over as work on the master cathedral continued.  Down the street named Parvis Notre Dame (west – from the Cathedral ) at  number 7 is the Archaeological Crypt of Notre Dame.  Excavations  during the last century revealed incredible details about the Île de la Cité, including a bathhouse, roman wall and other interesting antiquities.  The Crypt is open daily from 10 a.m. to 6 p.m. except for Sundays, Mondays and some holidays.  A fee is required for admission.

For more information on visiting and to view some incredible 360° views, see the official website of the Notre Dame Cathedral.

About The Hunchback of Notre Dame 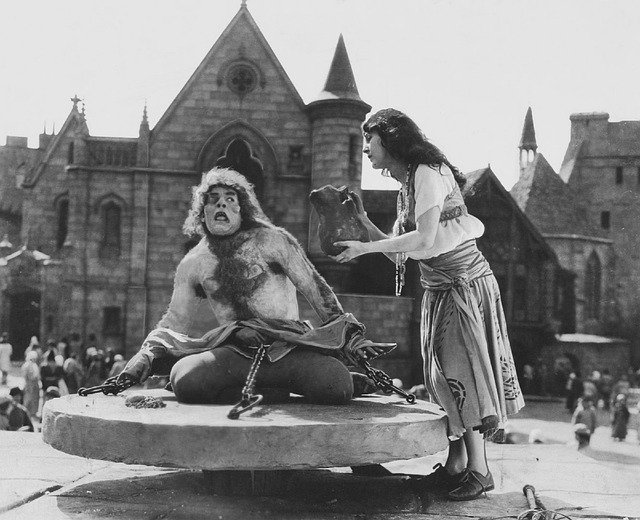 The story of the Hunchback of Notre Dame is one that has attracted a world-wide following.  It is the tale of the unjust persecution of a deaf, deformed man who was taken advantage of by his caretaker.  The masterful story of the Hunchback is one reason that so many visit the Cathedral of Notre Dame in Paris.Victor Hugo wrote the novel the “Hunchback of Notre Dame” in the early 19th century.  The story centers on three characters:  the Hunchback (Quasimodo), an archdeacon of Notre Dame named Frollo  (who had “adopted  Quasimodo) and a beautiful Gypsy named Esmeralda.  Quasimodo, a recluse, is the bell ringer at Notre Dame and lives in the bell tower. He is uncomfortable with the outside world whose inhabitants ridicule him because of his deformity and deafness.

Frollo, the cleric, is “attracted” to Esmeralda (as is the Hunchback) and commands the Hunchback to kidnap Esmeralda. The kidnapping leads to several other adventures and one  event in particular that threatens the life of Esmeralda, whom the Hunchback has come to love.   Esmeralda is accused of  murdering Phoebus, the man she loved, although  the murder was actually committed by the Frollo who was jealous of Phoebus.  Frollo, however, lies and implicates Esmeralda who is arrested for the crime and sentenced to death by hanging.

Quasimodo rescues Esmeralda from prison and takes her to the Notre Dame Cathedral, knowing that she can seek asylum there from the civil charges.  However, Frollo lures the Hunchback from the Cathedral, thus allowing the authorities to capture and execute Esmeralda. The Hunchback becomes enraged at this injustice and throws the evil Frollo from the Notre Dame Bell Tower. Quasimodo then searches for  Esmeralda’s body, finds it in the cemetery and grieves for her, starving himself to death in the process.