Must See Places in Vienna, Austria

Must See Places in Vienna, Austria 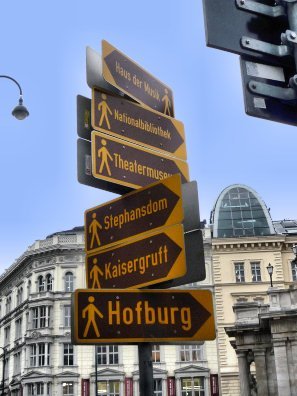 It is easy to while away a great deal of time at the Hofburg, as its size is enormous and its attractions are numerous.  When it was an operating palace, the Hofburg had a daily population of 5,000 and even then, it was not considered crowded.

There are many attractions to see in the Hofburg complex, but we recommend that you tour the Silver Collection (Silberkammer) , the Imperial Apartments (Kaiserapartements), and the Sisi Museum.  These three attractions are actually one tour with an admission price of approximately 10€  with 2€ additional for an audio guide (highly recommended).

Photographs are not allowed of the rooms on the formal tour, so we are unable to show you the beautiful apartments, furnishings, decorations and paintings that  you will  be able to see during your exploration of the Hofburg.

Sisi, was the favored name of Elisabeth (1837–1898), wife of theHabsburg Emperor Franz Joseph (1830-1916) who adored her, although it appears that his ardor was not returned. Conversely, he appeared to have had little time for Sisi due the needs of the Empire and she turned to other pursuits. Apparently, Sisi, arranged a relationship between her husband and a leading actress of the Vienna stage, so that he would have companionship during her various absences from the Palace, including numerous voyages abroad.

The Sisi Museum is housed in the first six rooms of the Imperial Apartments and employs an interesting series of displays in an attempt to penetrate the mystique surrounding her famous persona.

The exhibits in these rooms detail her life as young girl in Bavaria (she was a member of the Wittlesbach family who ruled Bavaria) through her betrothal to and life with the Emperor Franz Joseph. In these rooms, you will find displays focusing on the common aspects of her life (desk, writing instruments, combs, and parasols, as well as some of the exquisite gowns and stunning jewelry she wore in formal appearances (including her “Lady in Black” period following the suicide of her only son Rudolf in 1889).

A number of newspaper clippings details the causes in which she was interested, as well as public reaction to her lifestyle.  It is interesting to note that Sisi was not popular with the Viennese people and was more popular in Hungary than Austria, perhaps because she was the Queen of Hungary and actively advocated the political independence of the Hungarian people. The tour of Sisi’s Apartments ends with a room dedicated the details of her assassination by an anarchist during her journey to visit Lady Rothchild in Switzerland.

Elisabeth, in a manner that was unusual for the times, lived a life independent of the monarch.  She has become a cult figure for many, although it appears that her reputation was quite different than her actual life. The mystique surrounding her took on a life of its own after she was assassinated.

The more banal analysis of her life is that Sisi was unprepared to be married at sixteen to a cousin and her betrothal the Franz Joseph was a plot that went awry.  Apparently Sisi’s mother and Franz Joseph’s mother had secret plans to marry Sisi’s older sister Néné to Franz Joseph, but he fell in love with Sisi during his first meeting with the family.  Sisi’s notes indicate that she was originally intrigued by the marriage, but soon regretted giving up her freedom for the constraints of life to someone as prominent and powerful a ruler as Franz Joseph. In addition, it appears that Sisi was not cut out for the intrigues in the Imperial Court and spent most of her life attempting to avoid its focus. Perhaps, most importantly, Sisi never recovered from the tragic death of her firstborn (Sophie) at 2 years old, which was later complicated by the suicide of her son Rudolph in 1889.

The state apartments, although having walls covered with red, silk damask with a pineapple pattern, are relatively modest,   The rooms are predominately recreations using period furniture borrowed from other palaces in Austria, although the beautiful ceramic stoves are reputed to be the originals. The relatively plain furnishing of these rooms reflect the demeanor of Franz Joseph, who was a somber, religious man dedicated to the Empire.

The Kaiser Apartments, which were in the former Imperial Chancellery Wing of the palace, included not only the Emperor’s living quarters, but also his working quarters and his Audience Chamber and Waiting Room to the Audience Chamber (which is decorated with three monumental paintings of scenes from the monarch’s life). The tour moves on to the Emperors Conference Room, Study and modest bedroom.

The Emperor Franz Joseph lived a somewhat Spartan existence and was very religious. He began his day at 4 AM, rising from his narrow bed and proceeding to a small kneeler for prayers, followed by a modest breakfast and, then, a morning wash (he was bathed by his staff in a collapsible rubber tub). It appears that he worked the rest of the day on matters of state. His personal quarters, while not quite bare, were modest and he surrounded himself with photos of his family. He wore military uniforms most of the time and his valet claimed that the Emperor barely had two good-quality coats to his name.

Once the Franz Joseph and Sisi stopped sleeping together (after having produced four children, including a male heir), Sisi moved into separate quarters and the emperor had to ring a bell (so her staff could leave the area) before he could enter her quarters and visit. Sisi lived much more lavishly in better decorated apartments than those of Franz Joseph

Empress Elisabeth’s Apartments, adjoin those of Franz Joseph, but are located in what is known as the Amelia section of the Palace.  Sisi’s apartments reflect the differences between her values and those of the emperor. On your tour you will see her bedroom, which also served as a living room.  The tour continues to her dressing room, exercise room and lavatory.  These rooms are followed by a salon and then,  the luxurious Alexander Apartments, which were often used by Sisi for entertaining and included a dining room for intimate dinners.

Your tour of the Habsburg will start with the Silver Collection (Silberkammer), which is focused on tableware, as well as other dining table decorations used by the Habsburgs, although some cookware is included in the exhibit.

The feeding of the royal family and preparing for royal banquets required an army of workers. The facilities included an Emperor’s Kitchen for preparing food only for the emperor and his family and a large Kitchen equipped with roasting ovens and spits for preparing food for banquets. In addition, there was a Cold Kitchen for the preparation of pastries, cold meat and cheese. There was, also, a Salad Kitchen and a specific kitchen (the Oleo Kitchen) where the clear consommé named oleo was cooked.

The highlight of the extravagant collections of silverware, ceramics and porcelain is a series of gilt bronze table centerpieces.  One (the Milan) is over 30 meters in length. Silver plates, gilded services, porcelain services, crystal, ceramics and common pots and pans make up the rest of the collection.

The Silver Collection is quite large and the exhibit occupies a significant number of rooms. You will see table services in an amazing variety of designs and some used only once, while others were used only for special occasions. The wealth relayed by this collection is amazing, especially since much of the collection was sold off after the Habsburg Empire ended in 1918. Apparently, it was good to be a Habsburg.

There is even more to see at the Hofburg, including the Spanish Riding School, the Treasury, The Albertina, and much more.