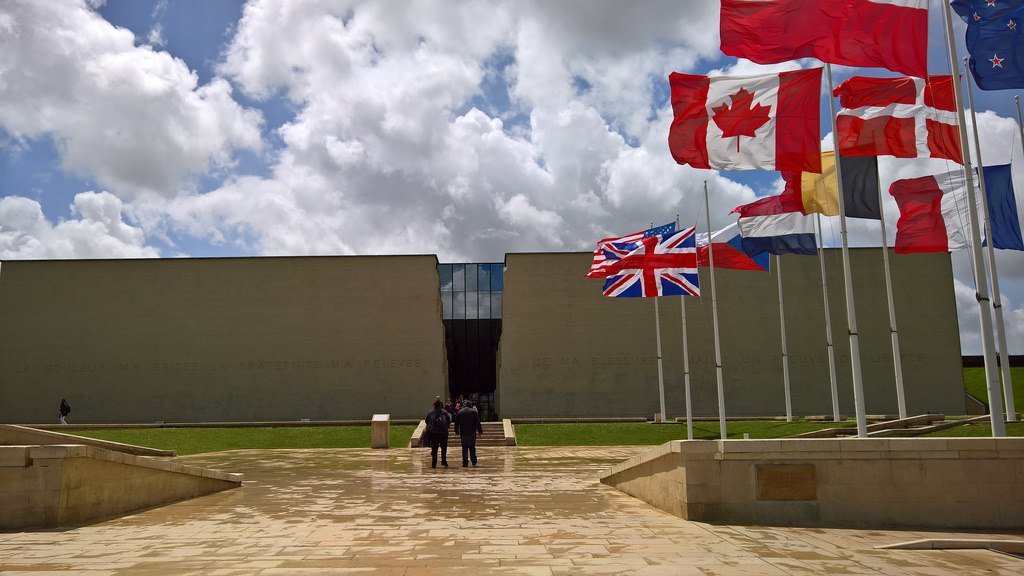 One attraction that is critical to an understanding of D-Day is Le Mémorial (A Memorial for Peace) in Caen.

The taking of Caen was a D-Day objective of the Allied Forces, but fierce German resistance marked the start of the Battle for Caen, a major, month-long conflict for control of the city.  Caen was bombed and attacked numerous times during this period, but the German soldiers refused to evacuate or surrender as controlling Caen was regarded as vital to their battle strategy.   During the prolonged battle, the city suffered almost total destruction, in addition to thousands of  civilian casualties.  It was this savage experience that prompted the citizens of Caen to build a memorial for peace.

Opened in 1988, the Memorial provides a thorough overview of WWII presented in a tasteful and thought provoking manner. The displays and dioramas are authentic and highly detailed. The sequence of the displays and the path through the museum help convey the feeling of impending war, declaration of war and the enormous burden of fighting World War II. In addition to providing a remembrance of this epic invasion, the museum is a celebration of the return of peace to France. A substantial wing of the Memorial is dedicated to peace and a Nobel Peace Prize gallery. In addition, there is an International Park dedicated in tribute to the soldiers who fought for France’s freedom in World War II.

Le Memorial is located on the outskirts of Caen and the route leading to it is poorly marked. When arriving from Paris on the A-13 motorway or from Rennes on the A-84 motorway, take the north bypass (Périphérique nord) exit No 7. The museum is a popular attraction and parking is limited. If you are staying in Caen, consider taking bus No. 2 from the town center to Le Memorial. Details on Le Memorial can be found at this site

Once you have finished touring Caen (there are a number of attractions  beside Le Memorial), head north towards D-79 and connect to D-514 to visit Arromanches.  Arromanches, a good place to start your tour of the Invasion Beaches.  If you are interested in seeing the British and Canadian invasion beaches, head north from Caen on D-514 for a tour of Gold, Juno and Sword Beaches and proceed along D-514 to Arromanches when finished. 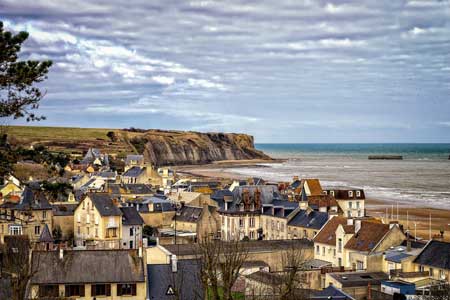 At Arromanches you can see the remnants of “Port Winston”, an artificial harbor built in England and floated to this bay, where it was sunk and functioned as a port during the Normandy invasion. Assembled over several days, this harbor was one of the main supply ports through August of 1944.  The engineering needed to complete this task was complex. Before your visit, read the concise and informative history of Port Winston at this site

Remnants of the invasion supply harbor in Arromanches

Only remnants of the artificial harbor remain today.   However, the small but interesting Musée du Debarquement at Place du 6 Juin chronicles its construction at Arromanches and should be included in your visit.  Arromanches 360, another attraction, features a short film of the invasion that places you in the middle of the action, as you are surrounded by nine screens (at Chemin du Calvaire – BP 9 Arromanches).

Next, head west to Longues-sur-Mer where you can visit one of the best preserved German gun emplacements on the Normandy coast.

If you have not yet made reservations for a hotel, there is an information office across from the museum at the Place du 6 Juin whose staff will help you find accommodations. Authentic chateaus are a great place to find a room with real French ambiance. 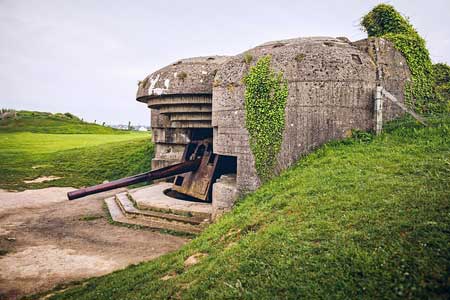 Longues-sur-Mer, approximately 3 miles west of Arromanches, on secondary road D-514, is the site of fortified German gun emplacements that bombarded the invasion ships on the morning of June 6, 1944. The cannons at Longues-sur-Mer were positioned so that they could shell the beaches at Omaha or Gold. Several of the 152mm cannons still survive and this is the only site in the area that includes its original weaponry. In addition, a ranging station (to observe the invaders and send targeting coordinates to the gunners) sits near the front of the cliff.

The German Guns at Longues-sur-Mer were a considerable threat to the invasion forces on D-Day.

One of the more impressive aspects of this site was the amount of concrete poured to protect the guns from bombardments by the Allied Forces. The construction served the Germans well, as Longues-sur-Mer survived several major bombardments. On D-Day the cannons at Longues-sur-Mer were involved in a major battle with several cruisers in the Channel. The next day, the British captured the site without a fight.