Schloss Hellbrunn was built by Prince-Archbishop Markus Sittikus who ruled Salzburg in the early 17th century.  The enchanting summer palace opened for his use in 1615. Markus Sittikus was raised in Italy and his mother, Portentius, was a member of the rich and powerful  Borromeo family.  It is due to this link that the  Palace and grounds have an appearance similar to summer  palaces in Italy from the same era. 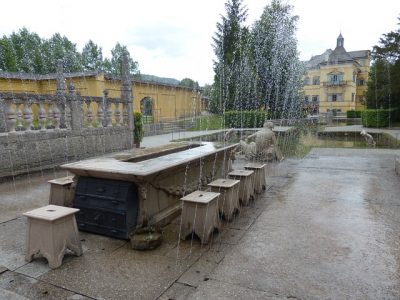 We recommend you visit Hellbrunn to see its Water Gardens or  “Wasserspiele”.  We consider experiencing them a great treat and a must see for anyone who enjoys a bit of whimsy.

The palace is about 3 miles (5 kilometers) from Salzburg by car, or 20 minutes by city bus #25. (Be sure to tell the bus driver where you’re going so he can call out your stop.  If you see the Municipal Zoo, you have passed Schlloss Hellbrunn.)

The Italianate Hellbrunn Palace is attractive and of historical interest, but the main attraction here is the Palace’s Wasserspiele or Water Gardens.  This is no ordinary garden, but a summer playground built expressly to delight and entertain the Archbishop and his guests.  Water and fun are the main elements of this attraction, so be prepared to be surprised and get wet in the process

The first stop on the guided tour is the Roman Garden that features a stone table with a well cut out of the center for cooling wine.  Ten matching stone stools were also uniquely designed to keep guests cool – or perhaps to keep them from overstaying their welcome.  With a subtle signal from the Archbishop, a servant (or in this case the guide), would turn a hidden lever and water shot from the seats, bringing the guests quickly to their feet.  Of course, the Archbishop’s seat would remain dry.

This is just the beginning of the fun and surprises that await you at the Schloss Hellbrunn Water Gardens. In addition to trick fountains, found where you’ll least expect them: there are room-sized grottos with unique water-powered sights and sounds; a series of small vignettes depicting Greek mythology and local trades; and a miniature mechanical theatre with 141 moving figures.   The Water Gardens are sure to delight the child in everyone.

Hellbrunn Palace’s other claim to fame can be found in its more formal gardens, where winding paths lead to the “Sound of Music” pavilion, where Liesl and Franz secretly met on a memorable, stormy night.

Hellbrunn is a popular attraction noted for its whimsical Water Gardens. You might get wet while visiting the water gardens, but do not worry, you will not get soaked. 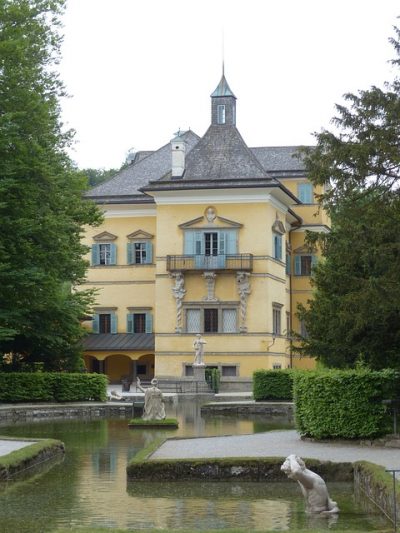 The palace was built in 1615 by the architect Santino Solari in the Baroque style. An impressive double staircase frames the front entry.  Hellbrunn Palace contains some fine examples of tromp l’oie painting, most notably in the Dining Hall, the Prince’s Chambers and the octagonal Music Room.  The Roman scene painted in the Dining Hall gives the effect of a large room with a high vaulted ceiling, when in fact, the room is only of ordinary size and height, and the music room murals have an ethereal feel, as if the people are actually moving.

Audio guides in German, English, Italian, French, Spanish, Russian, and Japanese are provided at the entrance to the Palace and will guide your tour of the relatively bland interior.  There is not a lot to see here, but the frescos in the rooms near the end of the tour are worthy of a visit.

On the hillside, visible from the palace windows, is a lovely little building known as the Monatsschlössl, or month-palace.  As the story goes, a guest suggested to the Archbishop that he needed a building on the hillside to enhance the views from the palace.  A month later, when the same guest visited Hellbrunn, he saw the completed building just where he envisioned it.  There are also rumors, that hillside palace was used to house the Archbishops lover.

Today Monatsschlössl houses the Salzburg Museum of Ethnic Studies.  Admission to the museum is included in the ticket price to Schloss Hellbrunn.

Finally, built into the hillside, in a former rock quarry, is an outdoor theater, where the Archbishop and his guests could enjoy plays and other entertainment.

Tickets to Schloss Hellbrunn include an audio tour of the Palace, a guided tour of its Water Gardens, and admission to the Museum of Ethnic Studies. Note: the Hellbrunn is closed November through the end of March. For more information about Hellbrunn Palace, gardens, groundsand opening hours go to its official website.