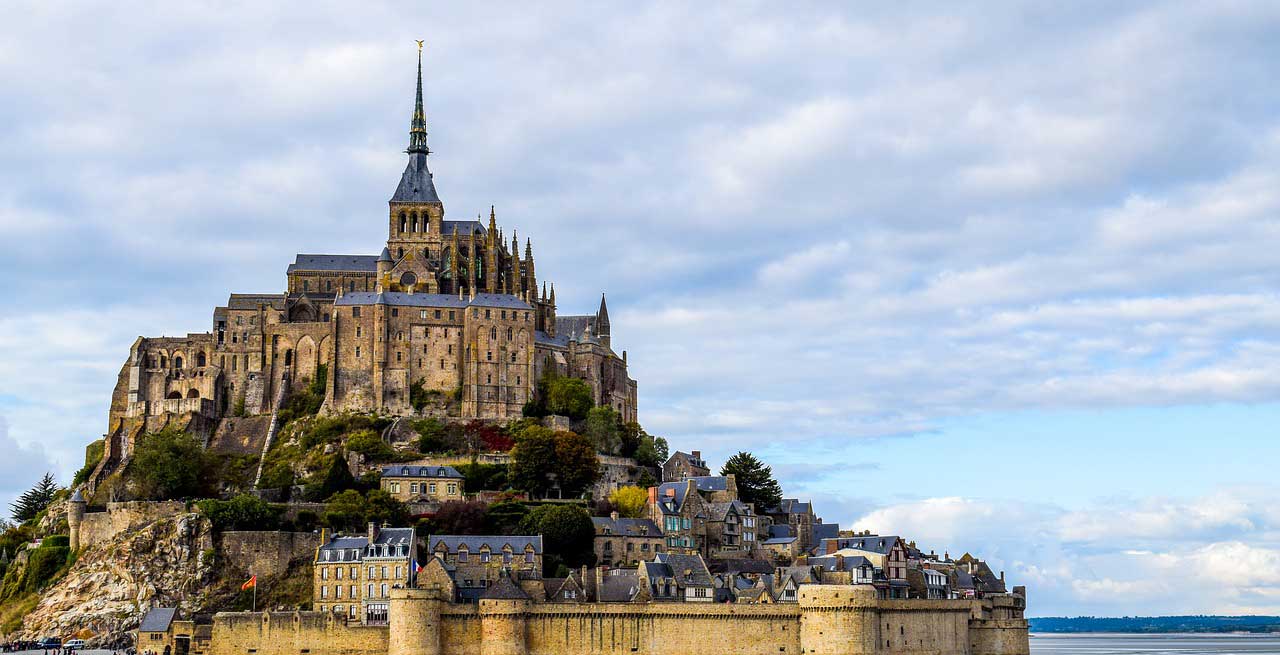 Mont-Saint-Michel, a famous UNESCO World Heritage Site is visible for miles across the rolling plains of the southern edge of the Cotentin Peninsula. The historic, Benedictine Abby is majestic from a distance and even more so when you enter its gate. Visiting Mont-Saint-Michel is a privilege.

Although the location of the Abbey is out of the way, unless you are visiting Brittany, this is a place whose unique geographic setting is famous throughout the world. Known both for its beauty and interesting history, Mont-Saint-Michel is a spectacle that attracts visitors from around the world.

Crowds can be a problem in summer (over 3 million visit each year), so time your visit with the morning opening or later in the day (last admission is usually around 6pm in the summer and earlier in winter).  At night the Abbey is illuminated in a view that should not be missed.

The History of Mont-Saint-Michel 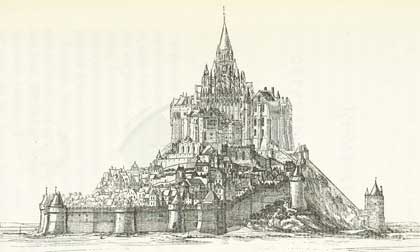 Legend has it that Saint Michael the Archangel came to St. Aubert, the Bishop of Avranches (a local town on the eastern edge of the bay), in the early 8th Century and directed him to build a church on the site of Mt. Tomb, a granite knob that stood above a surrounding estuary west of the town.

St. Aubert initially resisted the request, but, in 708, St. Aubert was convinced by the Archangel of the importance of the task (apparently after a third visit by the angel left the Bishop marked with a head wound) and prepared to build a church on the summit of the granite knob . In a delightful tale, it is said that all of the men in the local community were unable to clear a large rock that needed to be moved from the top of the mound before construction could begin.  The Bishop had a “sending” that the family of a local farmer could move the rock.  When they failed, the Bishop inquired if there were any of the family’s children not present and was told that only the baby had been left out of the effort.  When the baby was added to the team, his touch helped slide the rock down the side of the knob and construction of the original Abbey was soon started.  Unfortunately, the church built by the Bishop was later destroyed by fire.  (Mont-Saint-Michel has had a history of fires caused by lightning strikes.)

The rock knob that serves as the base of Mont-Saint-Michel sits above the extensive Baie du Mont-Saint-Michel, which is known for powerful tidal movements that sometimes leave the Abbey surrounded by water and at other times by mud flats and meandering streams.

The speed of the tide in the Bay is world famous and the rapid incursion of the tide can produce dangerous conditions for those walking in the bay. In addition, the tidal flats contain areas of quicksand that are continuously rearranged by the scouring action of the tides. Of course, the tide and weather conditions sometimes create oodles of fog, making the scene both ethereal and mysterious. 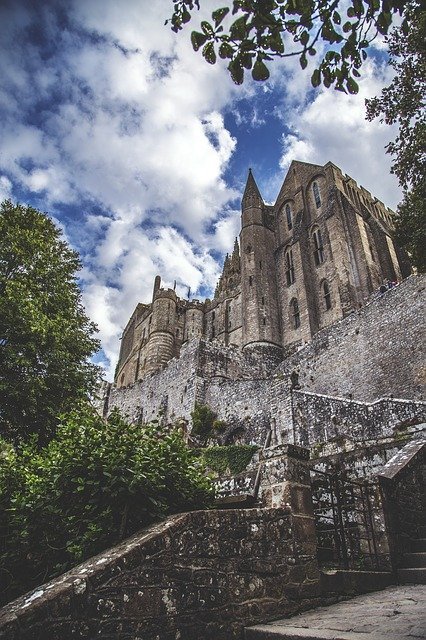 The Abbey church was the first major construction at the site (starting in 1023), followed by a new monastery later that century. Despite its off the “beaten track” location and perilous setting, Mont-Saint-Michel became an important pilgrimage site during the Middle Ages. Throughout time, buildings were razed and new buildings substituted, although most of the buildings surrounding the abbey were constructed in the 14th century. In the 15th century, defensive walls were added to repel invaders from England.

During the Hundred Years War the Abbey was converted into a fortress, but it was returned to its monastic role in later years. During the French Revolution, Mont St. Michel served as a prison and suffered from neglect until a restoration of its facilities took place in the late 19th century.

The Abbey has numerous rooms scattered through three main levels (the Abbey Church, The Promenior des Moines (cloister) and the Aquilon Crypt) and each offers interesting insights into the how the Abbey functioned. If you could see through the Abbey’s many walls, you would realize that it hugs the foundation rock and covers more and more of its base with buildings as it reaches towards the sky. The base rock occupies substantial portions of the low and intermediate levels of the Abbey.

While the Abbey church and the statue of St. Michael the Archangel atop its spire, are the crowning glories of Mont-Saint-Michel, numerous chapels, the cloisters, the Aquilon Chamber and other rooms will equally attract your attention. The Abbey is large and although many areas are restricted, you will find that your tour can take several hours if you are interested in exploring the many nooks and crannies.  The Abbey is not furnished, but the stateliness of the bare rooms cannot be denied.

We found that we were touring the Abbey in the reverse of the direction intended by the signs, but it worked out well since we  had the rooms to ourselves.  We managed to miss the crowds due to our counter-circulation.

The Abbey is not without its technical innovations. One of the most interesting areas contained a large diameter wheel (perhaps 20 feet) known as the Great Wheel that was used to move goods from the ground to the Abbey. Built during the period when the Abbey was a prison, it was powered by men (up to 6) who would walk inside of the wheel and propel it in a direction that would wind a rope pulling the supplies into the Abbey.

The Ramparts and the Village 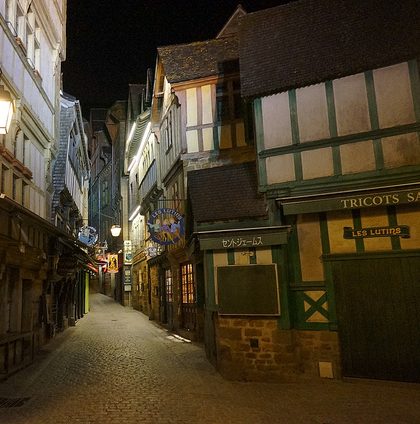 Be sure to find some time to walk the ramparts and enjoy the  panoramic views of the bay and the tidal flats from the  ten towers along the walls. The ramparts provide a number of excellent photo opportunities.

The village inside the walls of Mont-Saint-Michel is interesting but touristy. There are a number of hotels, several restaurants and numerous places to buy mementos along the narrow Grande Rue to the right of the entrance to the Mont (the Porte de l’Avancée).

Note, you can arrange lodging within the small village inside the Mont’s walls (the hotels are presented in the site referenced above). If you choose to stay in a hotel inside the walls, be prepared to tote your luggage from the parking lot outside of the entrance to the Mont (about a quarter of a mile).

Alternatively, there are several hotels located at the road junction just south of the Abbey’s causeway.

Mont-Saint-Michel and the Abbey are open daily except for January 1st and December 25th. Guided tours are available. During summer, guided bay walks are available. There is a parking area surrounding the causeway that offers pay parking. When the tide is in the parking lot floods and you must park further away along the causeway.

A new car park is located approximately 2.5 kms (1.5 miles) from the Abbey and a shuttle is provided for access to the Abbey.  See this official site  for  transport information.

Mont-Saint-Michel Bay is an ever-changing complex of sandy shoals and impressive tides where the difference between high and low water can sometimes be as much as 45 feet! At low tide, the Mount loses its insularity as the sea withdraws far to the north, uncovering numerous pathways for adventurous travelers who wish to cross the vast expanse of the bay to the gates of the abbey. Whether you are crossing on foot or on horseback, make sure your traversée is a safe and enjoyable one by joining one of the many experienced and licensed Bay Guides. For those who love to travel in style, hiring a maringotte is a great option. These charming horse-drawn carriages were once the only comfortable means of transport for wealthy tourists commuting from the local train station to the foot of Mont-Saint-Michel.