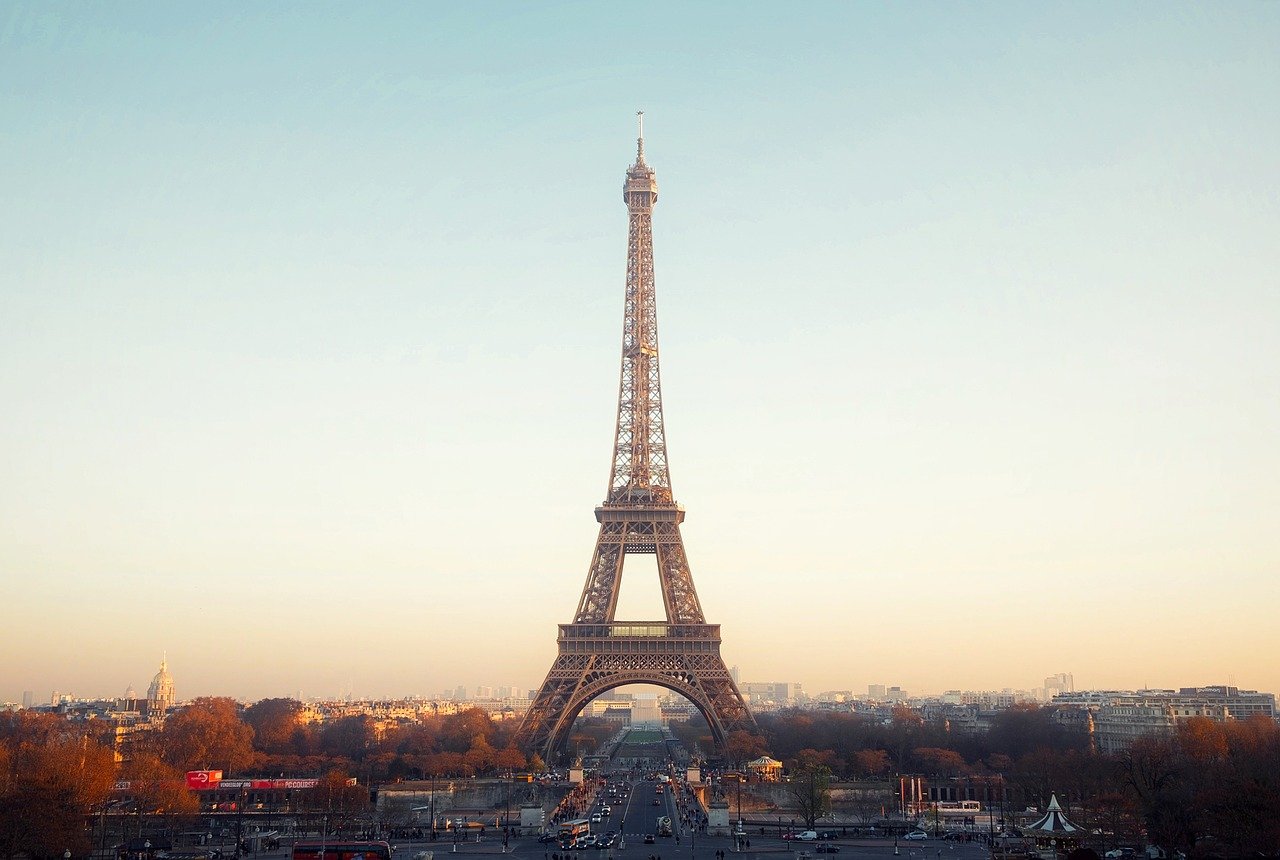 The Eiffel Tower is one of the internationally recognized icons of Paris that is a must-see for first-timers.   Even those who have been to the top of the Eiffel Tower before, rarely miss a chance to view  this soaring monument from one of the surrounding vantage points.  Viewing it again is like being greeted by an old friend.  Of course, most old friends do not have 1665 steps, as does the Eiffel Tower.

We can’t imagine visiting Paris for the first time and missing the incredible journey to the top viewing platform of the Eiffel Tower. Paris surrounds you and the views of the city are spectacular. The elevator ride is a thrill and, at least for us, ascending the Eiffel Tower is an action signifying that we really are in Paris once again.

Constructed between 1887-1889 by Gustave Eiffel, the Eiffel Tower is a world landmark known for its graceful structure and wonderful views of Paris. The monument, which is over one thousand feet tall, was built as a temporary structure for the 1889 World’s Fair and to commemorate the centenary of the French Revolution.  It proved such a popular attraction that it was given an extended lease on life, but only after a bitter debate among the French as to whether the monument was attractive or an eyesore.Access to the viewing floors is possible by elevators, for a fee that escalates as you aspire to see Paris from greater heights.  The First Floor has displays on the history of the Tower.  An elevator takes you to a viewing stand (the second floor), while a second elevator will take you to the top viewing floor (the Third Floor) where you are approximately 27 stories above Paris. The view is amazing.

The Eiffel Tower is a popular attraction. On an average day, slightly over 18,000 visitors are admitted. Individual tickets cannot be reserved, but large groups must reserve their tickets in advance. Guided tours are available from several local companies.

The line to ascend the Tower can be long in summer, but the view is worth the wait.  If you have good weather and have a little extra time, return to the Eiffel Tower at sunset for a spectacular scene.  In addition, when illuminated, the Eiffel Tower is equally stunning, so try to catch a view of it after dark.

If you are looking for the best view and photograph of the Eiffel Tower, approach it from the Palais de Chaillot across the Seine, as the view  is spectacular. Take the Metro either to the Trocadero or Passy to access the Palais.

The Eiffel Tower is open year around.  From June 18 though August 28 its hours are 9:00 a.m. to midnight. During the rest of the year, it is open from 9:30 a.m. to 11:00 p.m.  For more details and information about fees, please visit the official website for the Eiffel Tower.

The Eiffel Tower has two restaurants. On the first floor is the more casual 58 Tour Eiffel that converts to a brasserie in the evening from a family and group restaurant during the day. The famous Le Jules Verne restaurant on the second floor has earned a Michelin Star (Chef Alain Ducasse) and has the prices to prove it. The Jules Verne is accessible by its private elevator. Reservations are required for the Jules Verne and suggested for 58 Tour Eiffel. Information on contact numbers for reservations can be found at the  official website for the restaurants.


A fun fact about the Eiffel Tower is that it has been painted eighteen times since it was completed in 1889. The color has changed several times and the current hue is called “Tour Eiffel Brown”. The monument is painted in three shades of brown, from dark to light, from bottom to top – to make the color appear uniform from the ground. Painting the monument is considered the most important of the efforts to preserve the Eiffel Tower and requires fifteen-months to complete. Painting is scheduled  every seven years and the most recent effort started in 2009.

This large rectangular park stretches east from the Eiffel Tower on the pathway to the Invalides. The Parc, which is centered on the Place Jacques Rueff, is a good location for viewing the Eiffel Tower.

Located on the top of the Trocadero Hill facing the Seine and the Eiffel Tower, the Palais offers great views of the Eiffel Tower.Constructed in the 1930s for the World Exhibition, it is known for its excellent Musée de l’Homme, as well as the Musée de la Marine, and the new and impressive Cité de l’Architecture et du Patrimone, which is focused on the art and architecture of Paris.  The website of the Cité can be found here (use Google translator or your preferred translator). The museums are closed on Tuesdays.

Regardless of its impressive museums ( and there are several others in addition to those described above), the Palais De Chaillot is not on the list of major attractions in Paris because of its museums, but for its view of the Eiffel Tower. The gardens and fountains of the Jardins du Trocadero, which lie down the hill from the Palais, provide a wonderful background for a stunning view of the Eiffel Tower.

The Marmottan Monet museum will likely be of interest only to die-hard Monet fans. It is a lovely place, but, as one would expect, focused almost exclusively on the works of Monet.The Marmottan is located in an upscale neighborhood near the La Muette Metro station. The Museum possesses the world’s largest collection of works by Claude Monet but, arguably, only a small portion of his best works, although it does include his keynote painting “Sunrise”. The Marmottan has arranged Monet’s works in stages that follow the development of his techniques.

The Marmottan is a must see if you are a fan of Monet. See the museum’s website  for details on visiting. The Museé Marmottan Monet is open every day from 11 a.m. to 6 p.m. and Tuesday evenings until 9 p.m.

Opened to the public on June 23rd, 2006, the Musée du quai Branly, near the Eiffel Tower, celebrates the tribal-indigenous cultures of Africa, Oceania, Asia and the Americas. The museum’s architecture is splashy but symbolic. The museum’s collections are interesting and worth a  visit.   In case you were wondering, the Museum is named for its location along  the Quai Branly embankment.