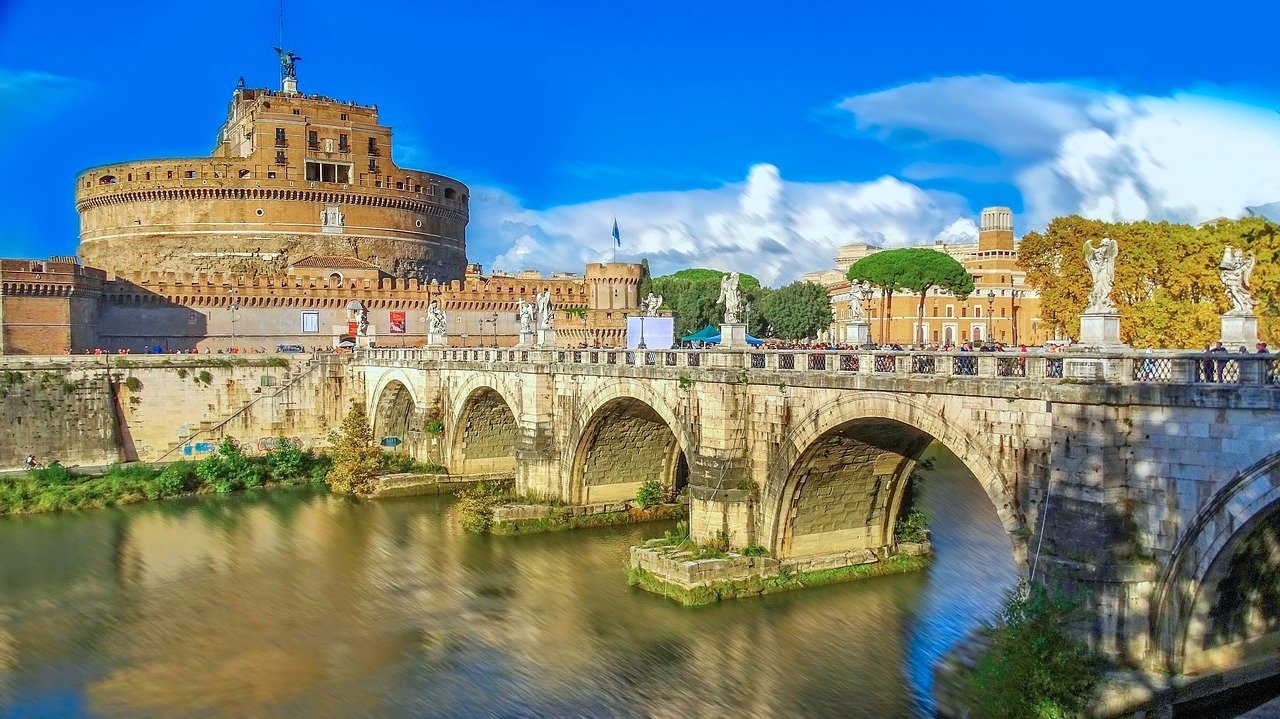 While there is a seemingly unending  list of attractions to visit in Rome, it is an active, noisy  city that sometimes makes visitors yearn for a little peace and quiet.  Although there are any number of day trips that you can take from Rome, we focus on two, although one of these destinations includes two stops.

Our requirements for selecting day trips were that the locations  not be too far from Rome, not require an all-day trip (unless your want it so) and have a historical link to the Eternal City.  These trips can be reached by bus, but this may take too much time.  Your best bet is to rent a car or arrange a tour to these destinations.

Ostia Antica  was once Rome’s major port and is thought to have been founded as early as the 4th century BC.  This port city was located at the mouth of the Tiber River on the Tyrrhenian Sea, approximately  30 kilometers  to the southwest of Rome (just south of the Aeroporto Leonardo da Vinci).  Eventually, Ostia Antica grew to become an important port and naval base, as well a leading commercial center.

However, its trajectory followed that of the Empire and by the 4th century A.D. Ostia Antica’s port capabilities had declined and its role as a mercantile center had come to a close.  While in decline, the town suffered through earthquakes, tsunamis and invasions.  Later in its history, it became a “quarry” for other cities in Italy, who sought its marble and other building materials that could taken from the ruins of this once prosperous town.

By the way, silting in the Tiber caused the river to change course, and the town is now around 3 kilometers from the coast. However, even after all the historical changes and damage, Ostia Antica is a great place to visit and doing so will help you imagine life in a Roman town of the 2nd or 3rd century.  It is a living museum, similar to Pompeii, but without the drama of a volcano.  Ostia Antica is an excellent place to spend  a day exploring and it is not far from Rome.

If you think you might be interested in visiting, there is an excellent website site to guide your adventure.  It can be found at  http://www.ostia-antica.org/  and provides a detailed, downloadable tourist guide.  (Exploring Ostia Antica is easiest if you have a car.)

Tivoli is a small hill town to the east of Rome that provides access to two amazing attractions.  In the town itself is the Villa d’Este, A UNESCO World Heritiage site, replete with stunning gardens, a unique water garden and an interesting 16th century villa.  On a plain south of the town you will find Villa Adriana, another World Heritage site,which was constructed by the Roman Emperor Hadrian early in the 2nd century.

The Villa d’Este and its gardens are considered one of the highlights of Renaissance culture. The garden’s design served as a model for many of the prominent gardens that were later developed in Europe.   The landscaping of Villa d’Este is stunning and its mixture of water, topography and plantings is very pleasing example of formal Italian Gardens. For more information see this official website http://www.villadestetivoli.info/storiae.htm.

Villa Adriana, near Tivoli,  is an interesting site featuring a villa built by the Roman Emperor Hadrian in the early 2nd century.   Hadrian was an unpopular emperor and regarded by many Romans as an outsider, whom, they claimed, was not born in Italy.  Whatever the truth of his lineage, it is clear that Hadrian did not enjoy spending time in Rome and during most of his reign he traveled the Empire.  We understand that Hadrian, who was an excellent administrator, had a significant interest in architecture and considered himself an architect of some skill.  His buildings in Rome, Italy and across theRoman Empire remain some of its finest monuments (e.g. the Pantheon, Castel Sant’Angelo, Hadrian’s Wall (United Kingdom) and Hadrian’s Gate and Library (Athens)).

Not taken with city life, and especially unhappy with the politics of living in Rome, Hadrian created a beautiful villa in the country near Tivoli.  His plan for the villa incorporated the best of the architectures he had seen around the Mediterranean into the country home he called Villa Adriana.

After his death the Adriana feel into disrepair and was all but forgotten for the next 1200 years.  Cardinal Ippolite II de”Este (responsible for building the Villa d’Este – in part using marble taken from Villa Adriana) was, also, responsible for rehabilitating Villa Adriana.   Although today’s site is a ruin, it is an interesting location and wandering though its remains is a pleasant way to spend an afternoon.  We think it not too hard to explore the site and imagine its past glory.  In fact, Villa Adriana is credited with playing a crucial role in the rediscovery of classical Roman and Mediterranean architecture by the architects of the Renaissance and Baroque periods.

There does not appear to be an official website for Villa Adriana, but we think you will find this website  – http://www.villa-adriana.net/  – helpful in deciding whether Villa Adriana is for you.

Many consider Florence, Pompeii and other  locations  to be good targets for day trips from Rome.  There is no question that there are many world-class attractions in Italy, but we think that visiting them as “day trips” is aggressive and you may spend a large portion of your day in transit, rather than actually touring and learning about the destination.

In order to visit these distant locations you will have to depart early in the morning and will not see you hotel again until late that  night.  In addition, you will likely dine on  fast food and miss the opportunity for to sample an excellent meal in the Italian countryside.  Our experience has been that there just isn’t enough time to appreciate unique, extensive and  wonderful destinations when you spend most of your time in transit.

However, this may be your only chance to experience these enticing locations.  If you want to wander, take a look at our section on the best places to visit in Italy and have at it.  Pompeii, the Amalfi Coast and Florence are popular day trips from Rome and many companies offer packaged tours to these locations.