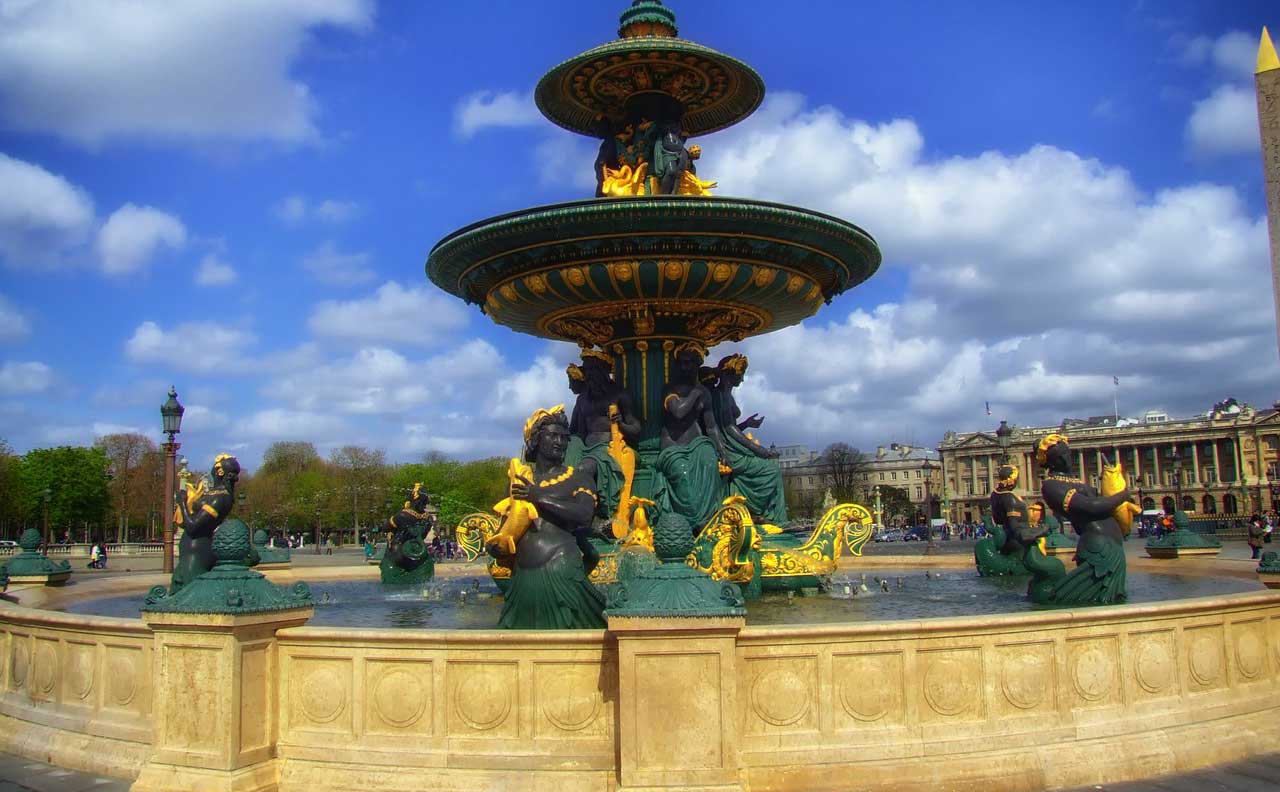 The Place del la Concorde has been renamed many times (it was once called Place Louis XV and, then, Place de la Revolution) and has always been a popular gathering place and often used to host civic celebrations, such as soccer championship celebrations. On weekend and in summer you will find street entertainers offering zany skits.

At the head of the square, (on the corner of Rue Boissy) is the stately Hôtel de Crillon, one of the most luxurious places to stay in Paris.

If you admire the oblelisk at Place de la Concorde, you might want to know what the Egyptian received in return for this impressive gift. We don’t want to ruin the story, but it is still regarded by the Egyptians as a bad deal.  You can read about the controversy in our guide to Salah al-Din’s Citadel in Cairo, Egypt.

Follow Rue Royale north towards the Place de La Madeline and the first intersection you come to will be Rue Saint-Honoré, which runs west to the Place Vendome (described below). Along Rue Saint-Honoré you will find Saint Laurent, Prada, Cartier, Prada, Lanvin and many stores offering luxury goods.  Continue along Rue Royale north and you will pass Gucci, Dior and Ralph Lauren and arrive at the Place de la Madeleine.

The Place de la Madeleine is  an area known for its gourmet  food shops. While on Rue Royale, keep and eye out for Ladurée Royale, a tea salon famous for its pastries at number 16.

While in this area,  you may want to take a look at its namesake church known as La Madeleine (19th century).  It was originally designed as  a memorial to the army of Napoleon, but was eventually commissioned as a Catholic church, with a temple-like design.  The interior is quite attractive and worth a quick glance.  The view of the city from the top of the steps is quite pleasant.

To the northeast of this area you will find a number of covered shopping arcades known as “passages couverts”, which were the 19th century precursor to modern shopping malls.  Many are luxurious, most have interesting architecture and all invite shopping. See the official websites of Galerie Vivienne, the Passage du Grand Cerf or the Passage des Panoramas to determine if this is the shopping experience for you.  If so, you may enjoy the Passage Jouffroy (across Boulevard Montmartre (north side) between Rue Vivienne and Rue Montmartre) or the Galerie Vero-Dodat at 19 Rue Jean-Jacques Rousseau.

The Place Vendome is one of the best squares in Paris from an architectural point of view.  The site is notable for many reasons, but is particularly associated with its lovely arcaded buildings.   This square houses many upscale stores and is the location of the “original” Ritz Hotel.

The Column (the Colonne) of the Grand Army that is located in the center of the Place Vendome was commissioned by Napoleon (whose statue once adorned the top of the column).   The column’s exterior is faced with plates made from enemy cannons captured at the battle of Austerlitz in1805.  The battle was one of Napoleon’s most celebrated victories and led to the end of Holy Roman Empire.  If the column looks familiar to you, it was based on the design for Trajan’s Column in Rome, that was also used to commemorate an important battle, but one that was over a thousand years earlier.

The shopping at the Place Vendome features jewelry from Cartier, Chaumet and other providers of luxury goods, such as  Charvet (one the world’s best known custom shirt tailors).

The Paris Opera is a richly decorated music hall built for Napoleon III by the well-regarded architect Charles Garnier. The Opera has recently been refurbished and the major roof statuary re-gilded to magnificent effect. The Opera, which has a stunning interior, is not an end destination for most visitors,  but a walk-by on your way to local shopping along the Grand Boulevards. Visit the official website  for more information.

Shopping at the Grand Magasins

Paris has a number of wide avenues called the “Grand Boulevards”, which were designed by Georges Haussmann, the planner responsible for the look of much of central Paris, during the last half of the nineteenth century.  The Grand Magasins (the great department stores) were attracted to the Grand Boulevards.  If you have a chance, visit the two Grand Magasins on Boulevard Haussmann: Galeries Lafayette (#40) and Printemps (#64).   Note that the main shopping area along Boulevard Haussmann is to the east near Rue de Rome.

Printemps is an impressive department store that has a delightful restaurant (Printemps de la Mode – Level 6) sitting beneath the store’s stunning stained glass, “Art Nouveau Cupola” that dates from the “Twenties”.  You can find a Ladurée Patisserie here, as well as the Café Be, which is managed by the famous chef Alain Ducasse.

Galeries Lafayette’s is another of the Grand Magasins and is an impressive and large store.  On its 6th floor you will find the largest shop for Paris souvenirs in the city. On the same floor is the Lafayette Café, which offers good food and an outdoor terrace with views of the city. See their official website for more information.

For those of you interested in the Grand Magasins, La Samaritaine, a Paris landmark on the Left Bank and one of the City’s most celebrated department stores, closed in June, 2005 due to “environmental” issues.  For some time, it was thought that the store would reopen in 2015, but more recent news indicates that the La Samartaine building, when it does reopen, will host a hotel, apartments and other uses, but not one of the grand department stores.