Snugly nestled along the banks of the  Mosel River near the border with Luxembourg, Trier (Trèves) is one of Germany’s unexpected treasures. Rich in history, appealing in its simplicity, Trier packs a large number of interesting but modest attractions into its relatively compact Old Town.The most compelling reason to visit Trier is its abundance of Roman monuments, such as Porta Nigra (photo below) and other antiquities from its days as an administrative capital of the Roman Empire.  In addition, Trier  is famous for several interesting churches, its market square  (photo left) and numerous other attractions that you will find immensely attractive.

Trier has long been a market town and its pedestrian-only shopping area is filled to overflowing on the weekend.

The attractions in Trier are impressive, but none are so spectacular that you should cancel your trip to Munich or Vienna to see Trier instead.  However, if you are looking for a pleasant town to visit, with a number of interesting attractions before you tour the Moselle Valley, Trier is just the stop for you. 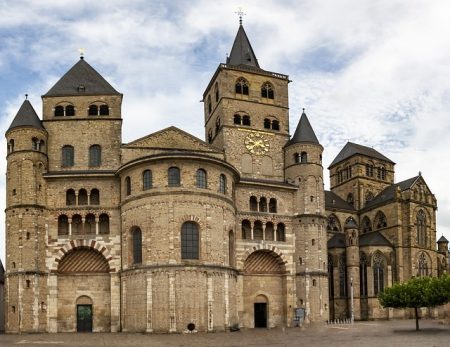 Trier was a established as a Roman Colony in the 1st century AD and grew in stature as a provincial capital and trading center during the next century. When the Roman Empire divided and was ruled by the Roman Tetrarchy ( in the late 3rd century, it was agreed that four rulers would to manage the complexities of the wide-spread empire), Trier became one of the capitals of the Empire under Constantine.

Constantine was a change agent, whose work towards the Treaty of Milan in 313, led to the recognition of Christianity as the official religion of the Empire. Constantine eventually ended the Tetrarchy and become the sole ruler of Roman Empire, although he moved the center of power in the  Empire to Constantinople, now Istanbul, Turkey.  Trier, however, benefitted from Constantine’s patronage and has many excellent Roman buildings to prove it.  Indeed, the Roman monuments along with the Dom have been accorded UNESCO World Heritage Site status.

We recommend planning a full day of sightseeing in Trier, maybe even two, if you want to take it slow.

We cover Trier’s Roman attractions in this section of our Trier Guide.

Trier’s Cathedral and the Church of our Lady are very popular destinations.

Trier embodies our idea of a market town, and we cover the Old Town, its unique buildings and shopping areas, below.

Trier’s Old Town is built for walking.  It is compact and only one of the city’s main attractions (the Amphitheater) is outside of its boundaries.  The vast majority of Trier’s Old Town is pedestrian only.  There are a number of parking areas surrounding the Old Town, although it is best to walk from your hotel to town, unless you are outside the central area.  If you arrive by train, you will be pleased to know that  the Trier Banhof is just a short distance from the Old Town.

The main Market Square (shown at the top of the page) is the Hauptmarkt, not far from the city’s gorgeous Cathedral (Dom St. Peter’s) and its companion Church of Our Lady.  The center of the city, as well as the center of the Hauptmarkt, is the Market Cross, believed to represent one of the oldest in Germany (the original is in the Stadtmuseum).

Also in this square is the ornate and somewhat whimsical fountain of St. Peter, dating from the late 16th century, who stands on a column atop the marvelous fountain as shown in the photograph below right.  In the photo on the top left of this page is the Steipe (mid 15th century) an attractive building with arcades at the bottom. Around the corner from the Steipe is another  colorful and impressive building known as the Renaissance Red House.

On the edge of the Hauptmarkt, surrounded by shops, is the Gangolf Church, known as the Market Church, which was built as a parish church in the mid-15th century.  The Gangolf has quite a powerful set of bells and when they begin their glorious peal, all of Trier can feel their resonance.

Further down the Simeon Strasse (on the way to Port Nigra, the Black Gate of the Romans) you will see the House of the Three Magi (the Drei-Königenhaus, which was constructed in 1261 and restored to its original state in the 20th century.  It is a classic example of the types of homes built by prosperous merchants, who built tower-like houses with entrances reachable by ladders dropped from the upper level.

Wandering through the city on your way to its major attractions, you may will undoubtedly run across a number of scenic buildings like the Weinestube on the left below (near the Dom) or the Electoral Palace (an administrative building that is not always open to the public), which is considered one of the finest Rococo-style buildings in Europe.

Trier has had many famous citizens, but perhaps, none quite as well-known as Karl Marx, who was born here in 1818 on Brückenstrasse in house that has now been converted into a modest,  but interesting museum.  See the official website of the Karl Marx Haus Museum  in Trier for more information.

Near the Karl Marx Haus is the Viehmarkt, the former stock market of the city.  Several years ago the city decided to create underground parking at the Viehmarkt and in the process discovered an archaeological treasure in the form of a buried Roman housing area complete with baths.  The find have been protected by a stunning glass-sided building that allow you to peer into the ruins to your hearts content.  In addition, the Viehmarkt-Platz is a very popular meeting place in the summer.

Finally, if you are interested in the history of the city of Trier, you might want to visit the Stadtmuseum, next to the Porta Nigra.  The Stadtmuseum has a number of interesting models showing the city at various stages in its history, as well as some interesting artifacts from the city’s past.  While in this area, if you need help or directions, there is a tourist information booth near the Porta Nigra.