Best Places to Visit in Scotland

Best Places to Visit in Scotland

If you have not yet decided to visit Scotland, take a look at our brief overview of the best places to visit in the country, followed by a short section on Why Visit Scotland.

Edinburgh is Scotland’s leading city for tourism.  It features the dramatic Edinburgh Castle on a mount overlooking the city and the elegant Palace of Holyroodhouse  that is the official residence of the British Monarch in Edinburgh.  The city’s “old” and “new” towns offer great sightseeing venues, incredible museums, as well as a lively performing arts scene.  Near Edinburgh you will find many interesting attractions, such as Linlithgow Palace (the birthplace of Mary Queen of Scots, Rosslyn Chapel, known to some from its role in the DaVinci Code novel, and a number of surrounding castles that are both scenic and fun to tour.  See this page of our website of Scotland for details on the best places to visit in Edinburgh.

The Highlands and the Isle of Skye attract many travelers to Scotland. The Highlands, which are described as separated into the Western and Eastern Highlands, are one of the most scenic and evocative of Scotland’s regions.  In the west you can tour the beautiful Glencoe area, which combines important stories from the history of the Scots with awe inspiring scenery.  Further west you will encounter the picturesque Eilean Donan Castle, the remote, craggy, beautiful and interesting Isle of Skye, as well as a journey to Mallaig from Fort William on the train featured in several of the Harry Potter movies.

Eilean Donan Castle – in the Highlands on the road to the Isle of Skye, near Dornie.  Parts of the movie “The Highlander” were filmed here.

In the Eastern Highlands you can see the water filled Great Glen that nearly cuts Scotland in half, along with Loch Ness and “Nessie”,  tits resident but shy monster.  Nearby are  the historically important Culloden Battlefield, the Clava Cairns (important to readers of Diana Gabaldon’s novels of “Jaime” and the Outlander series), Cawdor Castle and its impressive gardens, as well as the Glenfiddich Distillery near Dufftown.

The Borders area of Scotland, located along the border with England, is a scenic area, comprised of rolling hills and agricultural plains dotted with towns whose histories involve Scotland’s battle for independence from the British.  The towns are lovely and most have an historic ruin or two to add flavor to your visit.  Melrose and its famous abbey deserve a visit, as does Jedburgh, its famous abbey and the Mary, Queen of Scots Visitor Center. Those looking for literary history will want to visit Abbotsford, the mansion of Sir Walter Scott near Melrose, or Dryburgh Abbey that is his final resting place.  In addition, see Kelso, as it is a lovely village with an interesting nearby castle.  Finally, Selkirk is noted for its artisans who are masters of decorative glass, particularly paperweights.  See our guide to the best places to visit in the Borders for more details on these and other attractions.

The Grampian Mountains and the Northeast of Scotland is an area that is rugged, mostly mountainous, and always stunning.  Filled with small towns and quiet villages nestled in their glens, this is  a region of Scotland that offers a wide variety of attractions, although most involve the outdoors or simple rest and relaxation.

The Cairngorms National Park is a beauty and hosts the resort towns of Aviemore and Grantown-on-Spey, as well as the Strathspey Steam Railway.  The Royal Deeside (River Dee) is spectacular and its main town Ballater has several shops that supply nearby Balmoral Castle, summer home of the Royal family. To the east you will find Crathes Castle with amazing gardens, but the most interesting of the castles in this area is Dunnottar Castle that sits on cliffs overlooking the North Sea.

Glasgow, Loch Lomond and the Trossachs wrap-up our circuit of Scotland. Glasgow, is not a prime destination for tourists, although the nearby Burrell Museum has an impressive collection of  medieval treasures, including clothing. In the city Saint Mungo Museum of Religious Life and Art should be visited for many reasons, especially its masterpiece by Dali.

Further afield you may be interested in exploring the scenic Loch Lomond and the Trossachs, home of the legendary Rob Roy and clan McGregor territory.  Loch Katrine and its steamship the SS Sir Walter Scott are an excellent way to spend an afternoon enjoying the Scottish countryside.

Why choose Scotland for a vacation? 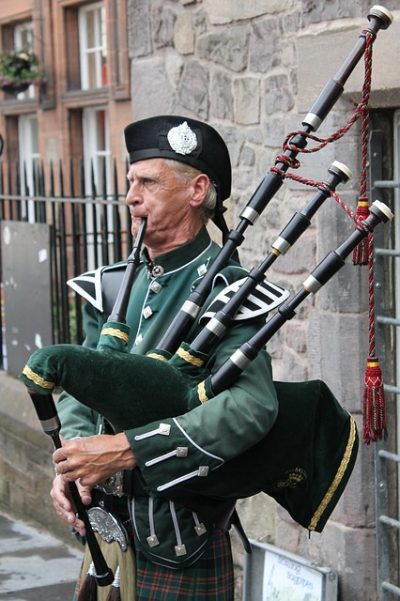 We think there are several good reasons.  First, Scotland and its inhabitants have made a mark on the world far exceeding the size or status of their country and you can appreciate why when you visit their homeland.  We think that Scots have created a unique culture that is worth knowing and understanding.  Second, the country’s history is interesting, provocative and to some degree familiar to all travelers. Mary, Queen of Scots, Bonnie Prince Charlie, William Wallace, the Clan McDonald and the Stuarts are names familiar to all and their stories are on display across the Scottish countryside.

Perhaps the most compelling reason to visit Scotland is that it offers some of the most beautiful vistas in the United Kingdom. The Scottish countryside consists of mountains, moors, lochs and coastal plains with numerous attractive islands thrown in for good measure.  The landscape is rugged in both the Highlands and the northeast and more gently rolling along the border with England.  The coastal areas are cool and damp most of the year and uncomfortably so in winter. The highlands can be windy and rainy even during the summer, while they are snow-filled in winter.

During spring and early summer, the countryside is alive with impressive flora and the rhododendrons will startle you with their size and dramatic color, particularly in the Highlands.  For many tourists, the west of the country, including its islands, is a great place to walk, hike, and climb.  The east and south of Scotland lend themselves to touring, stopping, shopping, eating and relaxing. Scotland is a country with  a million things see.  Most of them are interesting and uniquely represent Scotland, but the leading attraction of Scotland is its extraordinary landscape.

Scotland is a place to pace yourself. Often, it is hard to stop the day’s touring because there is always an historic abbey, a castle visited by Mary, Queen of Scots or something that you would like to see, just over the next hill.

Much of the country is sparsely populated and village life is a dominant feature in the rich quilt of Scottish heritage. Scotland’s culture is unique and its people are hardy and, often, serious.

There are a number of regions in the country and each is uniquely different, though all are enjoyable. We think that the “Highlands” will leave its mark on you if you choose to visit, but Edinburgh, the Borders, and the Grampians are equally attractive. Tourists thinking about visiting Scotland need to be mentally prepared for a trip to a country whose natural beauty and interesting people outweigh the quality of its formal cultural attractions.

Touring Scotland will familiarize you with Robert the Bruce (14th century), Mary Queen of Scots (16th century), Bonnie Prince Charlie – The Young Pretender (18th century) and the country’s recurrent attempts to throw-off the rule of the Britons.  Although Scotland won many battles in the fight for independence, the effort sapped the country’s strength while forming its history and influencing the nature of its culture.

A number of tours  of Scotland start in Edinburgh or Glasgow (the country’s major airports) and proceed northwest to the Highlands, eventually looping east and down the east coast before returning to Edinburgh or Glasgow.  We have followed the circle route model in creating our Scotland Guide and start you in Edinburgh and the Borders, proceed to the Highlands and, then, pass into the Grampians and the northeast.