Best Places to Visit in Munich

Best Places to Visit in Munich 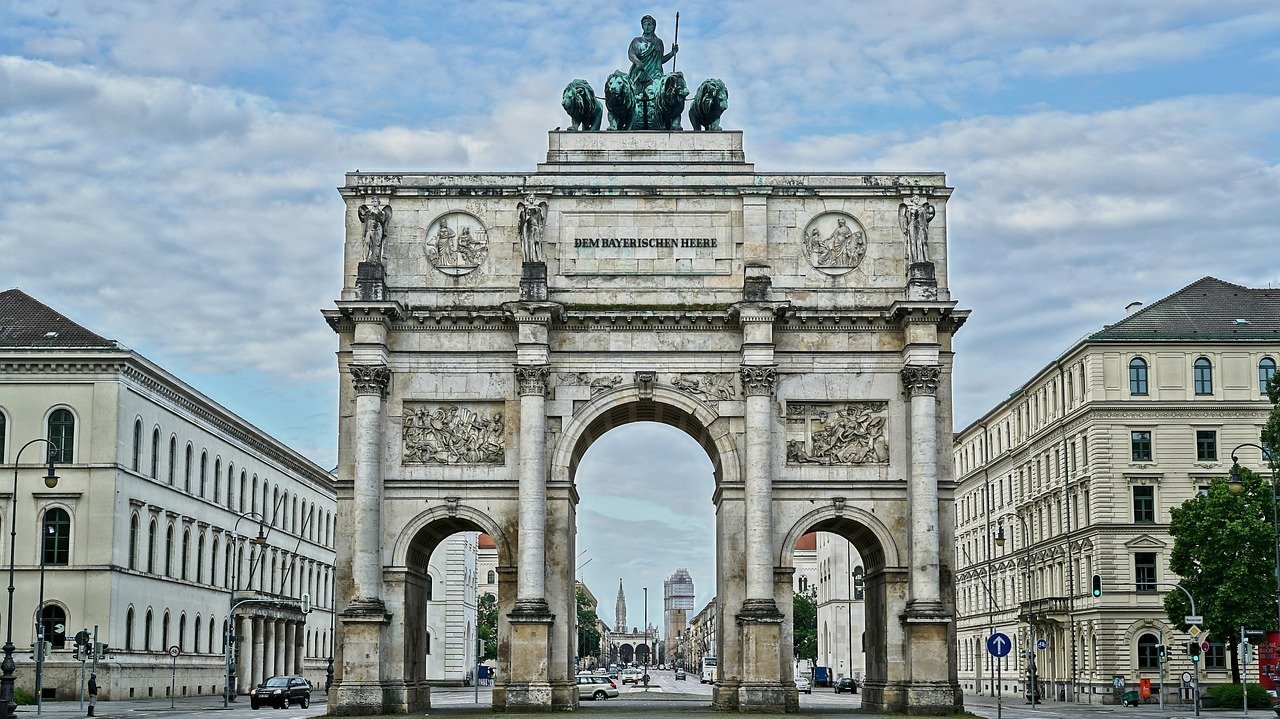 Travelling through Munich is relatively easy to walk in good weather. Alternatively, Munich’s extensive subway (U-Bahn) and light rail (S-Bahn) network make it easy to navigate the city.  You can purchase relatively economical  one or two-day passes for unlimited transportation around the city. Be sure to validate your ticket at one of the blue boxes before  using the ticket.

Another alternative for seeing the city is the “Hop-On Hop Off” bus offered by the Gray Line that includes a tour guide (it’s usually the bus driver). The Grand Tour  takes in all of the town’s major sights and an Express Tour (less expensive) is focused on attractions in the city center. Lower fees are offered for children under 14. As indicated by the name, you can hop-off to see an attraction of interest and catch the next bus to continue your tour. Buses depart from the Bahnhofplatz on the east side of the central train station (Hauptbanhof). Look for the easy to spot line of double-decker buses.

We show the location of the attractions we recommend visiting in Munich on a detailed street map of  provided by Google.  Clicking the map symbol, when it appears after the name of an attraction, will open our Munich Street Map to that location.  The maps are at their most informative when you view them at large scale (magnified) and use the hybrid button, which shows street names on top of a satellite image of the area.

By the way, the best way to get into the city from the Munich Flughaven (Airport) is to take the S-Bahn to the Hauptbanhof (Central Train Station) in the heart of the city.  You can catch the train for the forty-minute ride into the city at the lower level of the main terminal.  Buy your tickets from the automated ticket machines or from the travel desk, whose attendants are very helpful.  The cost is extremely  reasonable  or you can get an all-day pass (single tageskarte) for slightly more.  Taxis are € 80- 100, but may be a good deal if you are traveling with others or have lots of luggage.  If you have a large group of travelers it will be more economical to arrange a van for your transportation into town.

Munich’s name is derived from a band of monks who settled the area around thirteen-hundred years ago. The settlement (“Zu den Munchen”) officially became a town in the 12th century and was ruled by the Wittelsbach family  (electors, dukes and eventually kings) until 1918, a period of nearly 800 years. Be sure to tour their palace, the Residenz, which we describe below.  Throughout its history, Munich was often at the forefront of German politics, although its role as the birthplace of the 3rd Reich and the rise of the Nazi movement is not one that is celebrated.

Oktoberfest is Munich’s world-famous beer-drinking festival.  The fun runs for several weeks in late September and early October. The celebration is held at Theresienwiesen (southwest of the Hauptbanhof) underneath tents capable of accommodating thousands of revelers.

Facts you should know about Oktoberfest – 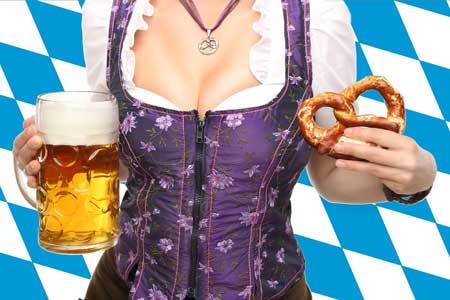 Oktoberfest starts in mid-September and usually ends in early October.  Oktoberfest is now held earlier in the year than the original festival to take advantage of the weather.  However,  it can be cool and  rainy in Munich in late September/early October. so be sure to bring rain gear to keep dry on your way to and from the festival.

Oktoberfest celebrated its 200th anniversary in 2010 with its 176th Oktoberfest, as the festival was not held every year since the founding of the event. The Weisn started in 1810 to celebrate the marriage of Prince Ludwig who became King Ludwig I (not the castle builder).  Oktoberfest is a popular event and you will encounter huge, friendly crowds at the fairgrounds and around the city.  Hotels are hard to find in Munich during this period, unless you have reserved far in advance.

Entrance to the fairgrounds is free, but if you want a good seat, be sure to arrive early.  Many head to the Theresienwiesen (called die Wiesen) before the thirty-two “tents” (think beer pavilions) open, in order to ensure the best seats.  Others reserve space in advance at their favorite tent.

Beer at Oktoberfest is sold by the Maß, a one-liter tankard.  While entrance to the event is free, a Maß  will cost you approximately €9.50 The price appears to increase in price by about .50 € a year. 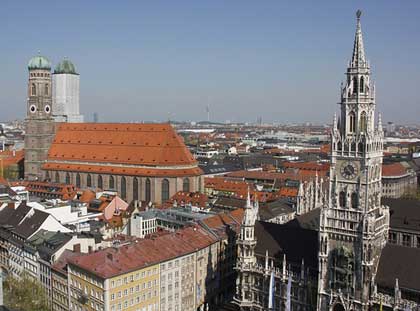 If you want to walk Munich’s Old Town, consider the path described below.

The Hauptbahnhof (central train station) is a meeting point for the transportation network and a central point in the traveler’s Munich. Start your tour here or at the next stop east (Karlplatz). Find your way to the surface at Neuhauser straße and proceed to the east (away from the Hauptbahnhof) along this pedestrian-only cobblestone street.

The Old Town begins at the Karlstor, site of a historic gateway to the “Old” Town . Neuhauserstraße, the first street-segment ahead leads directly to Kaufingerstraße. Both streets are renowned for shopping, although Bavarian food and beer are in ample supply along these scenic lanes. If you are lucky enough to visit in summer or autumn, the buildings will be adorned with some stunning displays of geraniums.

The first highlight of walking  Neuhauserstraße is the Bürgersaal Kirche at number 48.  Dating form the late 18th century, the building includes both an upper an lower church.  The stations of the cross in the lower church are very impressive.  The upper church is more formal and the frescos and statues are excellent.

A couple of blocks down, on your left, at Ettstraße you will encounter  the notable Saint Michael’s-kirche,  which features and attractive and balanced interior.  Although Saint Michael’s has an modest entrance, hiding behind it is an enormous barrel-vaulted knave reputed to be the second largest in the world, after Saint Peter’s in Rome. (The barrel vaulting was originally larger, but destroyed when the tower of the church collapsed in the late 16th century.)   The Crypt of St. Michael’s-kirche holds the remains of many famous Bavarians, most notably, those of  Ludwig II, the Bavarian king known for his Neuschwanstein Castle near Fussen, as well as string of other unique palaces.

Across the street you will find the Augustinerbräu, Munich’s oldest brewery (established in the late 13th century). although it was relocated in this location in the 18th century.  The Restaurant Augustiner is a good place for some fine beer and hearty Bavarian food.

Further to the east, at Augustinerstraße, you will find the Deutsches Jagd-Und Fischereimuseum   – just look for the large bronze boar and catfish on the side of the street.  In case you had not guessed, this is the German Hunting and Fishing Museum. (By the way, if you do not read German, use the Google Translate function to convert the website text).  The building is the former Augustinian Church (14th century with later additions, including some notable Baroque features).  If you are interested in hunting and fishing you fill find the displays fascinating, but children may be uncomfortable with some of the displays.

Continue down Augustinerstraße to explore the Frauen-kirche, Munich’s impressive Cathedral that dates from the 15th century. The Frauen-kirche is really a bruiser. Its brick walls and bell towers reach for the sky (over 325 ft.) and their lack of any buttresses or external supports give the feeling of majesty and a sharp, almost disorienting ascent as one looks towards the top of this imposing church. The Frauen-kirche was badly damaged in World War II and the restoration effort was completed only in the mid-1990s.

Although the church’s signature twin onion-domed, brick towers (complete with clocks) provide instant identification, they were not part of the original design. It appears that they were a happy accident of history, as the town could not afford to build the original design.  The rest of the Frauen-kirche, however, is as understated as the church’s plain brick exterior.  The interior is stark white and sparsely decorated.

The church houses the crypts of many member of the Wittelsbach family who played an important role in German history for over 800 years. The crypt is behind and underneath the altar. Louis IV,  who was Holy Roman Emperor, apparently rated better accommodations than the other Wittelsbachs and is buried in an impressive, ornate tomb just behind the gates and  to the right after you enter the church.

The Frauen-kirche has many notable treasures, but the sculptures of the apostles and prophets by Erasmus Grasser, dating from the early 16th century are especially notable.  The Church’s altar by Ignaz Günther is one of his most famous works, while Jan Polack’s painting The Protecting Cloak (in a chapel behind the main altar) is regarded as a  masterpiece by many.

Many visitors to the Frauen-kirche are attracted by the “Devil’s Footprint” which can be seen “burned” into the floor in front of the first wrought iron gate that separates the entry from the church proper. There is a fuzzy-appearing black footprint (somewhat small) with a distinct claw at the heel.  The “fabled footprint” (shown below) has an interesting story.  It goes like this:

The devil did not want yet another church built in Munich.  He endeavored to convince the builder to make the church so dark and gloomy on the inside while hiding his hope that doing so would result in no one visiting the church  He checked on the builder’s progress from the entry to the church where the footprint can now be seen.   From that specific point, the church’s columns obscure all windows (at the time, there was a large artwork that blocked the windows behind the altar) and the Devil thought the church was so unappealing, that no one would visit.  Of course, the devil had been mislead by his arrogance and the wit of the builder.  When he found out that he had been tricked, he returned and stomped his foot in anger making the impression in the floor. In addition, he turned himself into a gale-force wind and tried to blow the church down.  Although unsuccessful, to this day, wind seems always to be swirling around the towers of the Frauen-kirche.

If you are visiting on a day with clear skies, you might consider climbing the stairs (fee) to the Church’s observation tower for an impressive view of Munich with the Alps in the background.