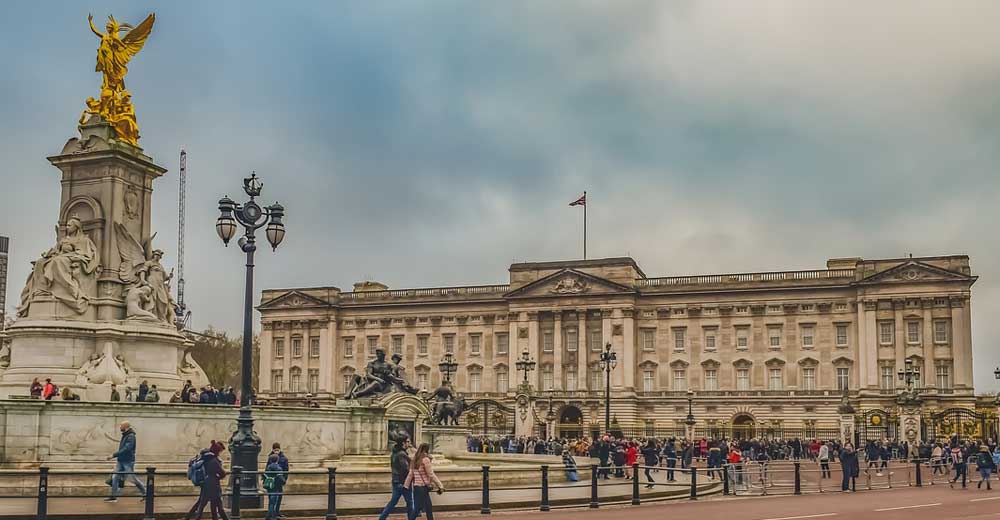 This section of our London City Guide describes the best places to visit in Westminster.

Originally a townhouse owned by the Dukes of Buckingham, the residence evolved into the palace that is the principal home of the British Monarchy. Buckingham Palace is surrounded by ornate, black, wrought iron fences and gates emblazoned with gilded, royal medallions.

Most tourists are attracted to the Changing of the Guard ceremonies that take place in the forecourt of Buckingham Palace. The event starts at 11.30 AM and lasts about 45 minutes. The ceremony, officially called the “Guard Mounting”, does not occur during extremely wet weather. During the autumn and winter, Guard Mounting takes place on alternate dates. See the official government site for details about the event and its schedule can be found at the official website of the British Monarchy.

During the summer, when the Royal Family takes up residence in Scotland, the State Rooms at Buckingham Palace are open for public viewing. Information on touring can be found here. The State Rooms bear evidence that it is “good to be a Royal” and are an interesting tour. In addition, you may want to see the Royal Mews, which were once the Queen’s Stable and now serve as the transportation center for the Royal Family.

Take a walk-by of the Palace on your trip down the Pall Mall to Buckingham Palace or during a walk through Green Park or Saint James’s Park.

St. James’s Palace, the Senior Palace of the Sovereign, is not open to the Public but is a building that exudes history and deserves a walk-by. Built in the early sixteenth century for Henry VIII, the somewhat modest Palace was the home to British monarchs for over three hundred years. It still houses some of the Royals but has been replaced by Buckingham Palace as the Official Residence of the Monarch.

Religious services in the Chapel Royal are open to the public between October and Easter.

St. James contains the official Royal Offices of the Duke and Duchess of Cambridge (HRH Prince William and Kate)

If you have an interest in World War II, a stop at Churchill-Cabinet War Rooms (including the Churchill Museum) is a must. The museum, which is part of the War Rooms complex, chronicles Churchill’s life and focuses on his “finest hour” as Prime Minister during World War II.

The Cabinet War Rooms are a “moving” attraction. The appearance of this underground complex understates its importance to World War II, as Churchill and his ministers made many crucial decisions regarding the war strategies for campaigns in Europe and Northern Africa in these rooms.
The rooms are small, bleak, and perfectly preserved.

The Map Room and the Cabinet Room were the main centers of action. The Transatlantic Telephone Room (once a broom closet) contains a simple desk with a single telephone that connected London to Washington, DC. The telephone was connected to a computer (for scrambling the call) that was so large it was housed in the basement of Selfridges’ Department Store on Oxford Street.

Visit the  official web site of the Churchill War Rooms and Museum for visitor information.

Westminster Abbey evokes thoughts of pageantry and royalty. The Abbey’s grounds were the site of the coronation of William the Conqueror in 1066 (William and the Normans were the victors at the Battle of Hastings where they defeated the English Saxons in October of 1066). With the exception of two monarchs, every King or Queen of England was crowned in a ceremony at Westminster Abbey.

The magnificent structure we see today was built from the thirteenth to the sixteenth centuries. It was designed as a church for the Royals and the national site for the coronations and burials of monarchs, as well as royal weddings (most recently the 2011 marriage HRH Prince William and Kate Middleton  ( William’s parents,  Princess Diana) and HRH the Duke of Wales, were married at Saint Paul’s Cathedral in  1981)).

The architecture of Westminster Abbey is stunning and the building has several notable sections. Be sure to buy a good quality guidebook that describes the highlights of the building or purchase one of the pamphlets describing the Abbey that are for sale near the entry. Tours for individuals or families are available, as well as audio guides. Check on both at the Information Desk.

Take some time for an examination of the exterior of the Abbey. A fine view of its flying buttresses is visible from the Cloisters. The Abbey’s Museum is, also, quite interesting.

Over three thousand people are buried in the Abbey but the focus is on the graves of royalty and the famous.  See Westminster’s Poets’ Corner for the burial sites of many of England’s literary greats including Chaucer, Johnson, Dickens, Browning, Hardy, Tennyson, and Kipling. Also, buried here are famous musicians such as Handel and Purcell. Scientists include Newton, Darwin, and Lord Kelvin.

The number of monuments in Westminster Abbey is overwhelming but these statues and markers are incredibly interesting and reveal much about the history of the United Kingdom. Reserve some extra time to explore this incredible source of history. You will undoubtedly find many plaques and tombs that will capture your attention.

Be sure to see the stunning Lady Chapel, its tombs and its noted fan-vaulted roof. The Lady Chapel was built at the request of Henry VII who provided the funding for this beautiful addition. Finally, don’t miss viewing the beautiful, octagonal Chapter House in the Cloisters. 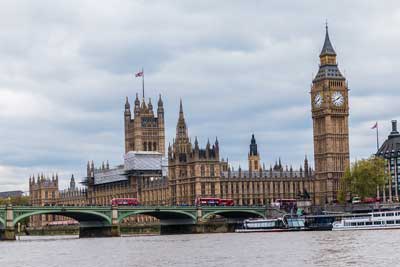 Houses of Parliament and Big Ben

The Houses of Parliament in Westminster (often called the Palace of Westminster) are one of the most striking sights in London. Containing the Houses of Lords and Commons, Parliament is where national laws are made in the United Kingdom.

The buildings of Parliament are intricately detailed and you should take some time examining this delightful architecture. The famous clock tower at the end of Parliament houses the bell Big Ben (and at thirteen and a half tons, it is big) that has become one of the most familiar symbols of the London and the United Kingdom.

Historically, Parliament was the site of the royal palace of Edward the Confessor and his successors. Its architecture evolved through the ages but was redefined after a calamitous fire in the nineteenth century when it was rebuilt in the gothic architecture that we see today.

Tours of Parliament for non – UK citizens are available only during the “Summer Opening” (when Parliament is out of session). To find out the dates and times you can tour Parliament, see the official website of  Parliament for more details on visiting. In addition, the Parliament website includes an interesting online tour of Big Ben.

Consider approaching Parliament from Whitehall where you will pass through the heart of British Government buildings and the venerable home of the Prime Minister at Ten Downing Street. Be Forewarned, you cannot see much of Number 10, due to security measure currently in force.

Follow Millbank south from Parliament and you will come to Tate Britain, an art museum that holds a large collection of British art ranging from the sixteenth century to the present. Works by Blake, Bacon, Constable, Gainsborough, Hockney, and Turner are among the highlights of the collection.

Information on visiting hours and special exhibitions can be found at the Tate Britain web site..