Lisbon, Europe’s westernmost capital city (yes, it’s even west of Dublin), is located in scenic southwestern Portugal.  The historic core of the city occupies seven hills located on the north bank of the Rio Tejo, near where the river meets the Atlantic Ocean after cutting through over seven-hundred miles of the Iberian Peninsula.

Greater Lisbon, the fastest growing urban area in Portugal, has a  population approaching three million residents. The core of the city is the home to approximately half a million Portuguese.   Resident of Lisbon are extremely proud of the economic and social advances that the country has made since democratic reforms were put in place after a peaceful revolution in 1974.

Legend has it that Ulysses founded the city as part of his Odyssey, but archaeological records indicate that the city may have been the site of an Phoenician settlement dating from 1,000 B.C. The Romans, Goths and Muslims governed the city through much of its history. The Reconquista of Lisbon in the 12th century marked the end of the Muslim period and marked the beginnings of the Portuguese city. (The Reconquista is the name given to the re-conquest of the Iberian Peninsula by the Christians who vanquished the Moors (Muslims, usually of African descent) and was the culmination of several centuries of battles.

The city is an amalgam of architectural styles, mixing the old and new in a slightly chaotic manner. A deadly earthquake destroyed the city in 1755, killing over 50,000 and leveling most of the city’s homes and historically significant buildings. Rebuilt on the same site, Lisbon lacks the grand architecture that one expects from such a historically important city, especially one with the wealth reportedly garnered when the country was a world power during  the “Age of Discoveries” from the 15th through the 17th centuries. 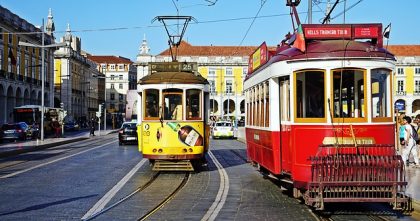 Those visitors who like to explore new areas by foot will find Lisbon a challenge. The hills are steep and numerous while terraces and flat paths are only infrequently discovered. On the other hand, the city is compact and has a lot of treasures that you will not see unless you explore on foot.

Those who like driving should abandon all hope of using a car in Lisbon. Between the hills and the traffic, you will soon lose your zest for driving. If still not deterred, then perhaps the lack of parking near most of the important attractions will change your mind about using a car in Lisbon.  We think hiring a guide who has a car is a better idea.

The most economical way to tour Lisbon is to use the Metropolitano, the city’s predominately underground, rail-based system. The Metro stations are highly decorated and something of a treat to see. For shorter hops, consider taking the trams (streetcars) that crisscross the city. In order to navigate the hilly areas, take advantage of the funiculars or  public elevators. Taxis are an economical way to travel if you have three or four companions. Finally, the suburban railways connecting Lisbon to Belém, Estoril and Cascais are an inexpensive way to see the sights during travel along the coast.

You might want to consider buying a Lisboa Card if you will be staying in town a few days.  The card can be purchased for one, two and three day intervals and provides free access to public transportation and free entrance to most museums and discounts on other attractions of interest to tourists.  See this site for more information about the Lisboa Card.

Lisbon is a city of unique neighborhoods and each offers exposure to a different aspect of this capital city. Notable attractions are limited in Lisbon, but there is much to discover.  If your time is limited, see Belém and the monuments related to the “Age of Discoveries”. If you have more time, consider visiting the areas and attractions we describe below and on the following pages. If you do, you will cover the “best places to visit in Lisbon”, although there are a number of interesting museums and attractions that we have neglected. If you are interested in another area of Lisbon, use the jump tables on the right-edge of the page to select another attraction.

Baixa, located in the center of Lisbon, is known for shopping, banking and its many open-air restaurants. Baixa is a relatively flat area between the hilly Barrio Alto on one side and the equally hilly Castelo /Alfama neighborhoods on the other side.  It is distinguished from these areas by its unique, regular, gridded street pattern.   To the south, it meets the River Tejo.

Baixa is bounded on the north and south by two large plazas. Located on the River Tejo, Praça do Comércio is a large public square that was once the site of a royal palace destroyed in the 1755 earthquake. (The Portuguese word praça translates to “square, public square, or plaza”.)  Today the Comércio is a large plaza, populated by pigeons and dominated by a statue of Jose 1st, who was king during the rebuilding of Lisbon after the earthquake. Ornate, arcaded buildings, which house the offices of a portion of Lisbon’s city government, surround the square. In addition, the Praça is a public transportation hub for Lisbon and many trams and buses stop here.

The shopping area of Baixa starts beyond the tall arch (the Arco da Victória) at the north end of the square. In the past, the arch was the gateway of the city, as it was the city entrance used by travelers who arrived in Lisbon by boat. To the west of the square (along the shore) you will find a train station (Estaçăo Cais do Sodré), which connects to Belém, Estorial and Cascais. 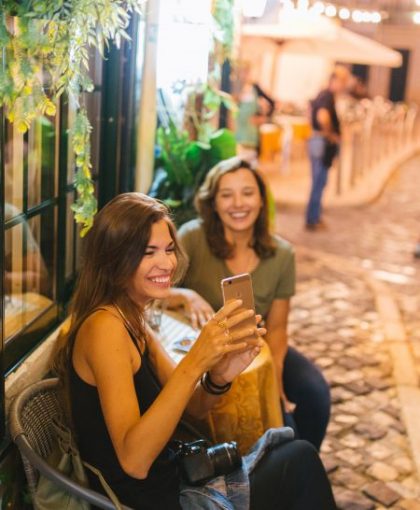 Follow Rua Augusta (the street under the arch) into Baixa for shopping, good eating and strolling. Take a seat at one of the many street-center cafés (the fish specials are highly recommended) and people watch. Although the area is popular with tourists due to its shopping, it is, also, where many Lisbonites shop and eat lunch..

The surface of a number of the walkways in this area are decorated  by Calçada,  a form of paving which features unusual designs depicting geometric patterns of flowers and other shapes. Some of the Calçada walkways are stunning, while others are unusual, though all are a pleasant change from asphalt or cement.

At the end of Rua Augusta you will find the  plaza popularly known as the Praça Rossio,  which leads to the Praça dos Restauradores. The Rossio is one of the most popular meeting areas of Lisbon. It was refurbished several years ago, adding to its attractiveness. The area also houses an opera house (Teatro de Dona Maria II) built in the mid-19th century and the Rossio Train Station where you can catch trains to Sintra or other areas of Portugal (Estaçăo do Rossio).

The Praça dos Restauradores leads to the Avenida da Liberdade, Lisbon’s famous grand-avenue that ends at a statue of Pombal, the architect of Lisbon’s rebuilding after the earthquake of 1755. The Avenida da Liberdade, in turn, leads to the Parque Eduardo VII, a well-manicured pleasant park with large grassy areas. Many of the Lisbon’s newer hotels are located to the north of the park.

A little further north, you will find one of Lisbon’s most treasured art museums -the Museu Calouste Gulbenkian. Calouste Gulbenkian, a noted Armenian businessman, made a fortune in oil trading. He arrived in Lisbon during World War II, taking advantage of Portugal’s neutral stance in the conflict and fell in love with the city and Portugal. Upon his death, the city was endowed with his magnificent art collection and a financial bequeath to create a museum to display these treasures.

The museum’s extraordinary collections are grouped in two. One section is devoted to Oriental, Classical Egyptian, Greco-Roman, Mesopotamian, Eastern Islamic, Armenian and Far Eastern art. A second section covers European art from the 11th to the 20th century. (The Calouste is located at Av. de Berna 45A 1067-001 north of Parque Eduardo VII. Take the Metro and exit at the S. Sebastiăo or Praça de Espanha stations or take buses 16, 26, 31, 46, 56)