Best Places to Visit in Heidelberg

Best Places to Visit in Heidelberg 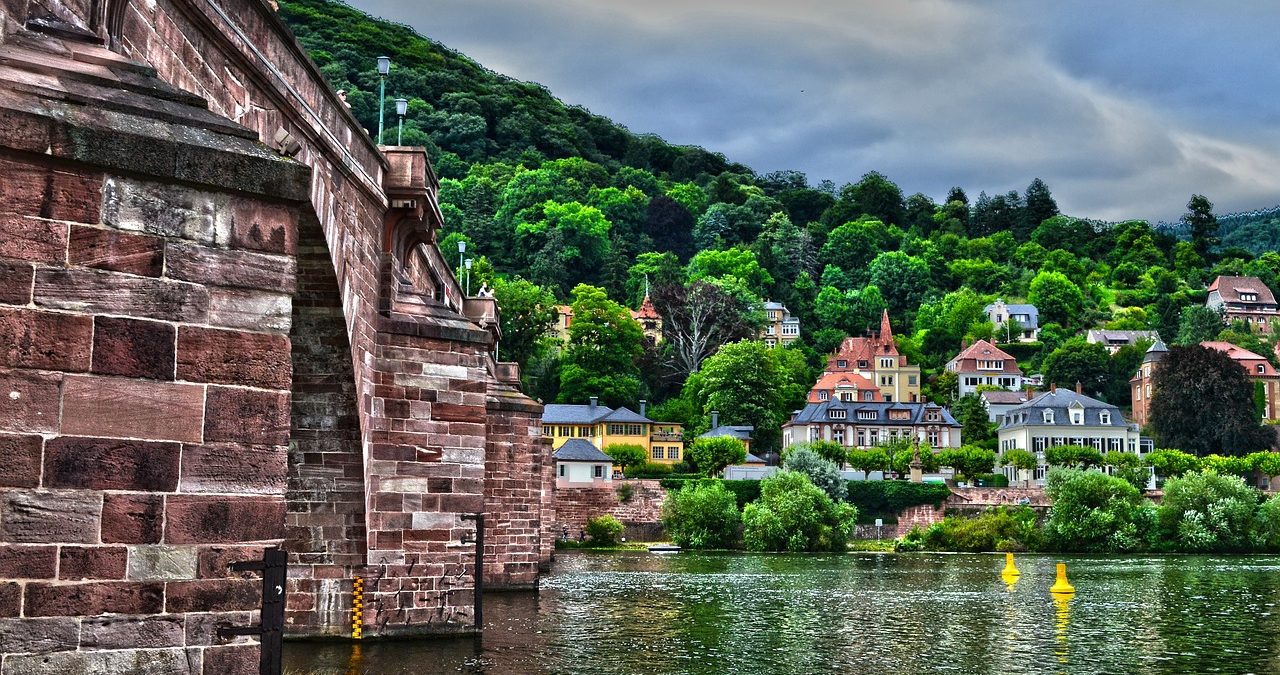 Heidelberg, a lovely city in a beautiful setting, is nestled below the brooding ruins of a once monumental castle known as Schloss Heidelberg. Although the castle is the town’s tourist magnet, visitors soon fall under the spell of this lovely city and its many attractions.

Long an area of settlement, Heidelberg is a modest-sized city nestled below the Königstuhl Mountain on the edge of the Neckar River.  The river flows past Heidelberg and joins the Rhine River at nearby Mannheim.The town’s history is connected to nearby, early Celtic settlements that date back over 2,500 years.   The area was once the colonized by the Romans, although later  reconquered by local tribes.

The precursor city to Heidelberg, was named Bergheim, but the city we know as Heidelberg is associated with a religious settlement that was founded in the 9th century.  In the late 15th and early 16th centuries the local rulers began a fortification on the hill above Heidelberg and the protective bastion soon became an elegant castle-palace.Unfortunately, Heidelberg’s success was noticed by many parties and its history was marked by turmoil and destruction. Indeed, the city and its famous castle were razed by the French in the War of Palatine Succession (also known as the Nine Years’ War (1688 -1697)) in both 1689 and 1693. The Castle was seriously damaged during the latter siege.

Although the town was rebuilt in the Baroque style by the middle of the 18th century, the castle did not fare as well. It was in the process of being rebuilt when a massive lightning storm and associated fire destroyed many of the palace buildings, after which reconstruction of the castle was abandoned. Although some say that lightning never strikes twice, a precursor castle in the same location was seriously damaged by lightning centuries earlier.

Unlike most well-known cities in Germany, Heidelberg received little damage in World War II. In fact, the most serious damage, the destruction of several spans of its famed Alte Brucke (Old Bridge), was a planned defensive action by the German Army as it prepared to abandon the city to approaching Allied Forces.

Today, Heidelberg and its Castle are among the top rated tourist attractions in Germany.  The area in Heidelberg of most interest to tourists is a section to the south of the Neckar River, in which you will find the Old Town and Schloss Heidelberg.   Continue below for a description of the town, but if you want to focus on the Castle, skip ahead to its history, descriptions of its buildings, or information about the interior rooms of the Castle.

The Old Town, which starts at the Bismarckplatz (a transportation hub for buses and street cars) and proceeds to the east around the Haupstrasse, is  reputed to be the longest shopping lane in Europe. To explore the castle, you can take a tram at the Bismarckplatz to a stop near the Kornmarkt. However, we recommend the walk, as it exposes many interesting buildings of historical importance, and leads you past great shopping, intermixed with numerous restaurants and cafés.

While strolling the Hauptstrasse, you will pass by a number of interesting stores and several important buildings. If you are interested in seeing the historic center of  Heidelberg University, follow the Haupstrasse to Heilgasse, where you will see the splendid Jesuitenkirche peeking at you from the end of the street. The church has an austere, white interior, a fantastic sounding new organ, and a stately appearance. Just around the corner from the church you will find the Universitäts-platz and the Old University Building at thecorner of Grabengasse, as well as the Carolinum (on Schulgasse). The building was originally named the Seminarium ad Sanctum Carolum Borromeum and was erected by the Jesuits in the late 18th century. Initially a hospital, the building was subsequently used as a barracks, and, then, as a residence hall for the university. At present, the Carolinum, houses the Central Administration of the University. (The University at Heidelberg facility is located to the north, across the Neckar river along Berliner Strasse.)

As you proceed down Hauptstrasse towards the Markplatz, you will pass (on the right) the Hotel Ritter (Ritter Haus), sometimes referred to as the house of the Knight St. George (whose statue) adorns the top of the building). The Ritter Haus is one of the few buildings from the 16th century to have survived the War of the Palatine Succession. Its architecture and gables are said to be typical of the design of houses of wealthy traders in 16th century Heidelberg.  There are a number of interesting statues adorning its facade and we recommend taking a close look at this important building.

Across from the Ritter is the oldest church in Heidelberg, the Heiliggeistkirche (the Holy Ghost Church), which dates from the early 15th century. East of the church is the Markplatz (Market Square) and its modest, but beloved Fountain of Neptune, a replica of the original that was constructed in the early 18th century.

The Rathaus, on the other side of the Marktplatz, was reconstructed after the end of the War of Palatine Succession, but remodeled several time since then. The Marktplatz becomes a popular outdoor venue for drinks and meals in warm weather. 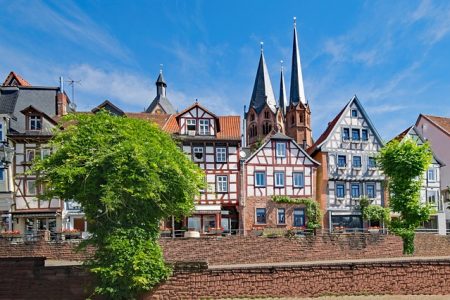 North of the Markplatz at Steingasse and the Neckar River you will find the twin-towered gateway to the Alte Brucke (Old Bridge – photo at the top of the page), dating from the 18th century. The Alte Brucke, which provides scenic panoramas of the town and the Schloss Heidelberg, is one of the famous sights in Heidelberg. You cannot say you have visited the town if you have missed the view from the Bridge. If that is not enough of a reason, there is a interesting, but recent statue called the Bridge Monkey to the west side of the gate that is a popular photo shoot (especially if you are in it)). If you are so inclined, continue across the bridge and head to the Philosophenweg (Philosopher’s Walk), a path offering spectacular views of Schloss Heidelberg and the town.

To the east of the Marktplatz on Hauptstasse is the Kornmarkt, once the site of Heidelberg’s official granary.

The less scenic way to the Castle is to pay to take the Bergbahn (a funicular – or inclined railway) up the hill.   The entrance to the Bergbahn is at the southern end of the Kornmarkt  in a modern-appearing building. We recommend taking the funicular to the castle and walking back to town on the Burgweg, but many visitors take the funicular both ways.  There is an extension of the Bergbahn  that travels further uphill and beyond the castle that provides spectacular views of the area when the weather is clear.

By the way, the Karlsplatz, site of a Franciscan Monastery until the early 19th century, is just to the east of the Kornmarkt  on Hauptstrasse and offers spectacular views of the Castle.  It, also, is the largest square in Heidelberg’s Old Town as has some interesting buildings of its own.  Of special note, is an  attractive building in the Baroque style (early 17th century) that once served as the Grand Ducal Palace of the Court of Baden (Heidelberg is located in Baden-Wurttemberg, one of the 16 states of modern Germany). 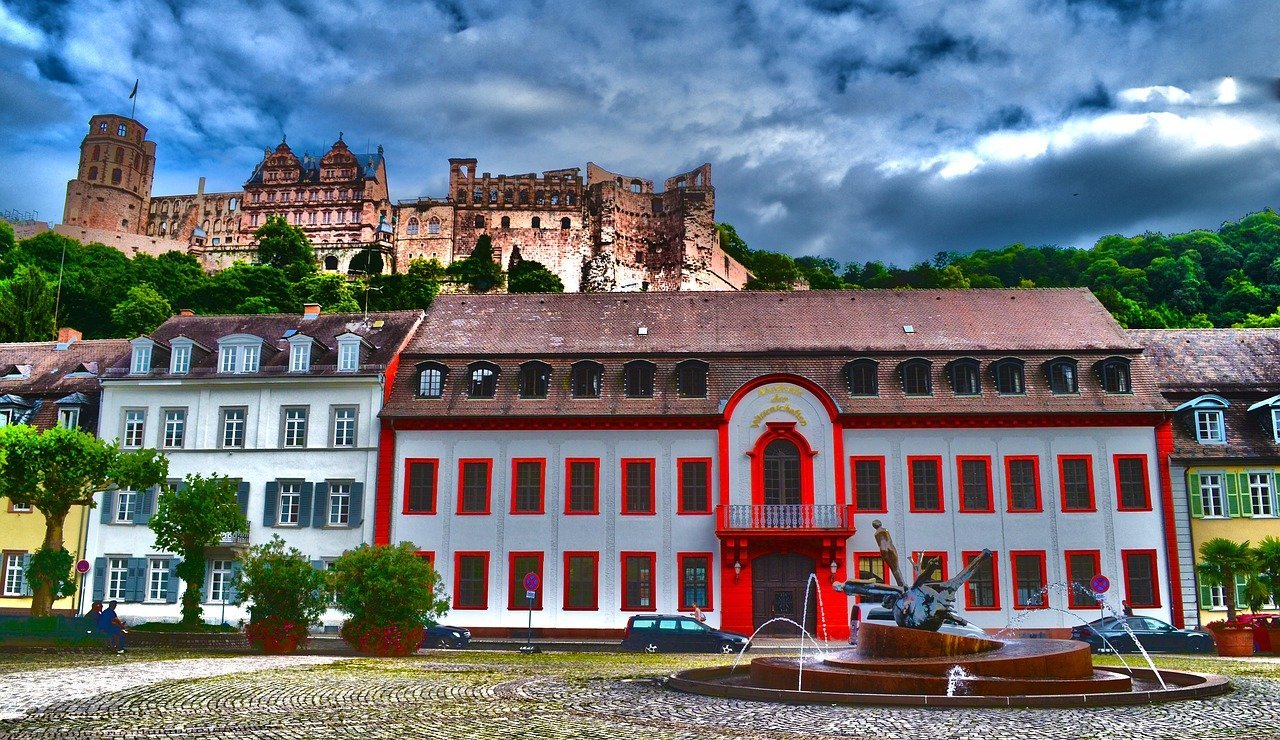