Best Places to Visit in Gibraltar

Best Places to Visit in Gibraltar 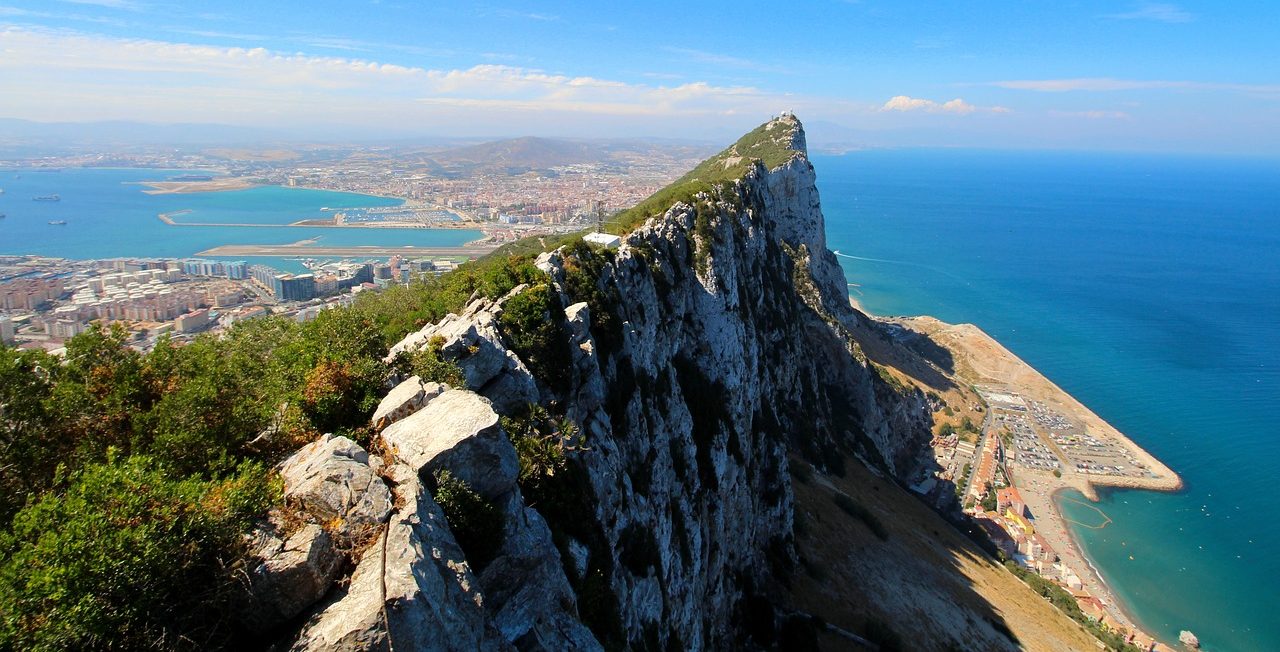 Gibraltar is a British overseas territory that was conquered during the Great Siege (1779-1783) and ceded to the country as part of the Treaty of Utrecht at the end of the War of the Spanish Succession.  Gibraltar occupies a short peninsula extending south of Spain at the point where the Mediterranean Sea and Atlantic Ocean intermix.  The peninsula, separated from Africa by twenty miles of water, is dominated by a massive and majestic sandstone ridge  known as the Rock of Gibraltar (approximately 1400 feet high).

In the past,  the “Rock” was considered as one of the two Pillars of Hercules, based on the fable that Hercules created the rift valley between Europe and Africa by severing the continents with a bash of his weapon.  Most tourist come to see the “Rock” and travel to its top. Although the area’s other attractions are modest, there is enough to see in Gibraltar to take up a day.

Gibraltar has been a highly desirable piece of military real estate for centuries being the strategic location on the only exit from the Mediterranean Sea to the Atlantic Ocean.   In fact, the Rock was named in honor of the Arab general, Tariq ibn-Ziyad who built the first recorded fortress upon it in 711 A.D. The Moors then named the site Jebel Tariq (mountain of Tarik). Over the next several centuries the name was modified to Gibraltar.  The phrase“Solid as the “Rock of Gibraltar,” is derived from the fact that although the area was assaulted many times while under British rule, no one was able to capture the “Rock”.

English is the primary language of Gibraltar and the United Kingdom’s claim to the area infuriates Spain which fervently desires to reclaim the territory.  If you enter Gibraltar by sea, you might miss the tension.  If you cross the border from Spain (which requires you to cross Gibraltar’s airport runway) you might get a minor taste of  the tension.

If you’re adventurous and prefer to see the sites at your own pace, automobiles are available for rent.  Several sites  are accessible via public bus service, but the service is slow and not recommended, if you have time constraints.

There are also several tour companies that offer a variety of guided tours.  Choose this option for a more in-depth look at the area’s attractions.

The Gibraltar Cable Car a tourist attraction in its own right, as well as the best transportation vehicle to the top of the Rock. It offers a spectacular view of the Rock and surrounding areas, including: the continents of Europe and Africa, the Mediterranean Sea and Atlantic Ocean, as well as the city of Gibraltar and surrounding areas. The basic cable car ticket provides all passengers with an audio tour describing Gibraltar’s history and the sights that can be viewed from the ridge along the top. The trip to the top takes about eight minutes.

Tickets can be purchased for either one-way or round-trip tickets. Some folks prefer to ride up and walk down. Premium tickets are also available, which include the entrance fees to a selection of Gibraltar attractions (so choose carefully).

The west side of the Rock is covered with greenery and the upper section of the Rock is a designated Nature Reserve.  It is here that you  can also see the Barbary Apes that are found within the Reserve.

For more information about hours of operation and ticket prices contact www.gibraltarinfo.gi

The Gibraltar Museum is a great place to start your tour. The Museum provides a terrific introduction to Gibraltar, its remarkable history, and insight into the significance of the many of the historic sites you can see during your visit.

The Museum is built over what is said to be the best preserved, 14th century Moorish bathhouse in Europe. It is housed in the 17th to 18th century home of the Chief Ordinance Officers of the British Army and is known locally as the “Bomb House.”

Its many exhibits are displayed in a series of galleries, such as the “Passage of Time” gallery, which tells the story of life on Gibraltar from as early as the Jurassic Period. Other galleries depict natural history, the great siege, Islamic life, and more. See this official website  for additional information about the Gibraltar Museum.

These tunnels, also known as the upper gallery, were first excavated out of the rock by the British army to transport heavy guns to a promontory from which they planned to defend Gibraltar from French and Spanish invaders.

Ultimately many of the guns were set up inside the cave, which allowed them to shoot at the enemy while the Rock’s wall protected them from return fire. There are four gun-batteries in the first 370 feet of tunnel completed during the Siege and seven more in St. Georges Hall, completed after the Great Siege was won.

Touring the tunnels you will be entertained by exhibits and reenactments of the battles, as well as a spectacular view from the batteries in St. George’s Hall. These tunnels are just a small sampling of the more than 30 miles of tunnels that exist inside the Rock of Gibraltar.

It was once rumored that St. Michaels cave was bottomless, and that it was linked to Africa by a subterranean passage. Although it is a very deep, no  passage to Africa has ever been found. What you will find, though, is a spectacular natural grotto featuring some very impressive stalagmites and stalactites, which, when backlit create an almost fairy tale atmosphere. Cathedral Cave, with its natural acoustics, is often used as a concert hall and entertainment venue. During World War II, it was prepared as a hospital, but was never put to use.

In 1942, when another entrance was being excavated to the original St. Michaels Cave, a new cave was found. The lower cave features a captivating subterranean lake. Guided tours of Lower St. Michael’s Cave are available through advance reservations only and are limited to small groups. The Lower Cave is still in its original natural state, so the tour requires some light climbing with ropes, and the paths are a little darker, wetter and narrower than those found in the caves above. Plan to dress appropriately with warm clothing, and non-slip shoes. Children under 10 are not permitted.

The apes of Gibraltar are actually tailless Macaque Monkeys, who have been on the Rock for as long as anyone can remember. This is the only place in Europe where monkeys of any kind live outside of captivity.

Myth has it that the British will rule as long as the Monkeys are there. These charming primates are one of Gibraltar’s top attractions and are usually found at the Apes Den or Queen’s Gate in the upper area of the Rock. They are also often found near the café at the top of the cable car, as well as near the Siege Tunnel entrance.

The monkeys are very comfortable around humans and have been known to approach, or even climb on visitors. They also have a reputation of being mischievous little pick pockets, so hold on to your belongings. It’s also important to remember that they are wild animals and, as such, they can be aggressive, and have been known to bite if frightened or upset. Do not feed the monkeys – it is against the law. If you are caught, the fine is £500.

Some remnants of the Gibraltar’s first castle are still standing and can be toured today. What can be seen today was rebuilt in the 15th Century over the foundation of the original stronghold.

The most notable buildings are the Tower of Homage and the Gate House. Many of its original walls are still standing and offer a good example of Moorish architecture. It is not clear as to when the Castle was originally built. Some say it goes back to the 8th Century and Gibraltar’s first occupier, General Tariq. Others say that it was built later by the Arab Governor of Algeciras in 1068.

Although it history is clouded, it may be the first Moorish structure  to be built on European soil. The Castle is said to have the largest “keep” and tallest tower on the Iberian Peninsula. This is where the Moors launched their first attacks on Europe resulting in their occupying Gibraltar for the next 781 years.

Europa Point is located at the southern most tip of Gibraltar. Its main claim to fame is the Point’s historic lighthouse, which was built in 1838. It was automated in 1994, and its light can be seen from 17 miles away.

The Point is a particularly attractive photo opportunity in the summer when the flowers surrounding the light house are in bloom.

Another reason to visit Europa Point is the view of Africa and Spain across the Straight of Gibraltar. It seems fitting that Gibraltar’s two most historically significant religions have a presence here, as well. The first, Our lady of Europe Shrine was built on the site of a small mosque by the Spanish conquerors in 1462, and has been a stopping place for mariners ever since. The second is the Ibrahim-Al-Ibrahim Mosque built as a gift from King Fahd of Saudi, Arabia in 1997. The Mosque took two years and more than five million Pounds Sterling to complete.

Nicknamed the “Rockbuster,” Gibraltar’s One-hundred Ton Gun is the best surviving example of this Victorian supergun. There were only twelve guns built by the British in 1870, eight were sold for the Italian navy, two were installed on Malta, and two on Gibraltar.

It took 35 men and a steam-driven hydraulic system to operate the gun, which was able to shoot a 2,000 lb. shell up to 1,540 feet per second, allowing it to penetrate more than 24 inches of wrought iron. It took 450 lbs. of gun power to accomplish this feat. It also took three hours to build up enough steam to begin firing. The was alright because it took warships of that time three hours to get within firing range after once being spotted. The One-hundred Ton Gun is located at the Napier Battery overlooking Rosia Bay.

Gibraltar is well known for its duty-free shopping. Stores abound down Main Street, and on the adjoining small streets and alleys. Some of the best bargains are realized when shopping jewelry, fine glassware, perfume, electronics, and leather goods. If you’re looking for a gift unique to Gibraltar, you might want to visit the Gibraltar Crystal shop, where you can also see a glassmaking demonstration.

The bargains you find may depend on the exchange rate of your currency against the British pound. It pays to do the math! Also, be aware of the duty-free limits. If you are flying directly from the Gibraltar Airport, you will need to consider the limits at your home destination. However, if you entered Gibraltar at the Spanish border, you must declare your purchases when you return to Spain, and again when you pass through customs at your home destination. Therefore, it might be a good idea to learn about the Spanish duty-free. 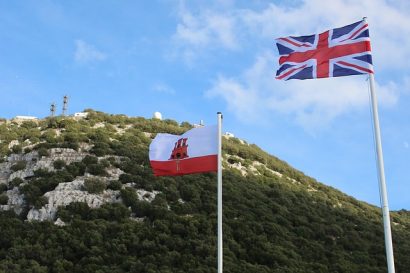 In 1982 Argentina and the United Kingdom went to war over the Falkland Islands and other disputed islands in the South Atlantic Ocean.

During the 74 days of hostilities, the Argentine military dispatched a small team of underwater demolition experts to Gibraltar with orders to  sink a British Navy ship.  Apparently, the Argentines had the port under observation for nearly a month before they were given the go ahead for a target of interest.  However, their operation had been compromised by the British and the team was apprehended in Algeciras (across the bay from Gibraltar) by the Spanish authorities, just as saboteurs were departing for the attack.  See this article in the Guardian for more details .