Campania, a popular region with tourists, is known for its exotic seascapes and  beautiful coastal villages.  The noteworthy attractions in Campania include the  towns of the  Amalfi Coast ( Amalfi, Ravello, Positano to which we add Sorrento),  the Isle of Capri, and the archeological wonders of  Pompeii and Paestum.  Naples is the area’s largest town, but it is also the least attractive of the destinations available in this area. 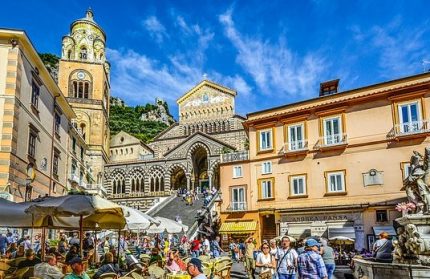 The  Sorrento Peninsula is a fingerlike protrusion of land that separates the Gulf of Naples from the Gulf of Salerno.  The Amalfi Coast, located on the south side of the Sorrento Peninsula, is an extraordinary natural treasure.  Here, the  hills along the Amalfi Coast flow sharply the sea, forming dramatic landscapes and spectacular coastal views.

Many of the towns in the Amalfi appear precipitously perched on small terraces, and the mountainsides appear almost stair-like as these terraces are layered to the edge of the shore. Note that most of the towns on the Amalfi are small both in terms of area and population (most have less than five thousand residents).

Positano is, perhaps, the most beautiful and the crowded of the towns along the Amalfi.  However, Positano is preferred by many as the best location for an overnight stay in the Amalfi.  The town offers fine shopping, but lacks any buildings of historical significance.  Like most of the  coastal cities on the Amalfi, it is best seen from the water, so reserve some time for a local cruise.

The Church of Santa Maria Assunta  in Positano is known for its Byzantine era Black Madonna.  (Use Google Translator  on the website- or click on website’s the link to “Chiesa S. Maria Assunta” and then on the link “Galleria fotografica Interno” to see image of the church and the Byzantine icon of the Black Madonna and Christ child.)

The town of Amalfi has a dramatic setting

The town of Amalfi combines beautiful scenery with an interesting history.  Its Cathedral of Saint Andrew is a popular attraction. Parts of the cathedral date from the tenth century and it contains relics of Saint Andrew the Apostle.  Be sure to see its exquisite Cloister of Paradise.

You may also want to see the Emerald Grotto or take a boat trip so you can see the town from the sea. Remember that Amalfi was once a powerful maritime republic on a par with Genoa and Venice. You might be interested in a quick exploration of the Arsenal, the ruins of a what once was a medieval shipyard.

Amalfi is known for the unusually rich taste of its lemons, so look for the sorbet shops.  Or if you like your lemon a little tangier, try Limoncello, a lemon liqueur that can be used to make some wonderful desserts.

Click for more information on visiting provided by the Amalfi Tourist Office.

Ravello is a small village that sits a distance uphill and is detached from the coast.  It provides dramatic views of the Amalfi Coast and has been a magnet for the rich and famous over several centuries.  Be sure to see the city’s two noted villas – the Villa Rufolo and the Villa Cimbrone, both originally built by local nobility.

Information on visiting  Ravello from its official tourism website can be found here.

Sorrento is not actually part of the Amalfi Coast (it is on the north side of the Sorrento Peninsula), but is usually included in the tour of the area, as it is the first major stop after Pompeii when heading to the Amalfi.

The Old Town (called the Old City Center)  offers several Palazzos (Veniero,  Correale) and the beautiful cloisters of Sant Francesco).    Along the coast you can tour the ruins of Queen Joan’s Baths (Villa Pollio Felice), which was an over-the-top villa during the height of the Roman Empire.

The best (and sometimes the worst) way to see the Amalfi coast is to drive it.  Many travelers head south from Naples to Sorrento, followed by a trip across the peninsula to the towns on the Amalfi Coast that surround the waters of the Gulf of Salerno.

The circuit is usually closed by traveling uphill to Ravello and north to the Autostrada (A3).  However, we recommend continuing along the coast to Salerno and heading south to see the amazing Greek temples as Paestum.  Finally, you may hear the road along the Amalfi Coast described by some as the “corniche”, which is a French term for a road that winds along a steep coast or cliff.

Note than the traffic has taken its toll on the area.  Several of the cities have created parking lots away from the centers of the towns, while other towns have taken more direct action.  Positano, for example,  is officially a “slow city (Cittaslow)”, which means that there are times when you cannot drive your car in the city, even if you are staying there.  Be sure and ask about parking and road regulations when you book your hotel reservations.

The Amalfi Coast is a popular tourist area and a seemingly mandatory inclusion on every  travel company’s tour of Italy.  Be prepared for crowds and smoke-belching buses if you drive the Amalfi Coast in summer, as the area’s  population triples  during the summer travel season.

Those having flexibility in their travel schedules, should  opt to see the Amalfi Coast in late spring or early fall. If you really want to enjoy the area, you need to take a room and spend a few nights exploring the cities after the tour buses have returned to Rome or Naples.

One of the great drives in the world can be experienced by starting at Sorrento and touring along the Amalfi Coast through Positano, Amalfi and uphill to Ravello. Most settlements in this luxurious coastal area are terraced on the sides of steep hills and utilize every inch of land available.  The winding roads that navigate these hills provide enjoyable views of the area’s spectacular coastline.