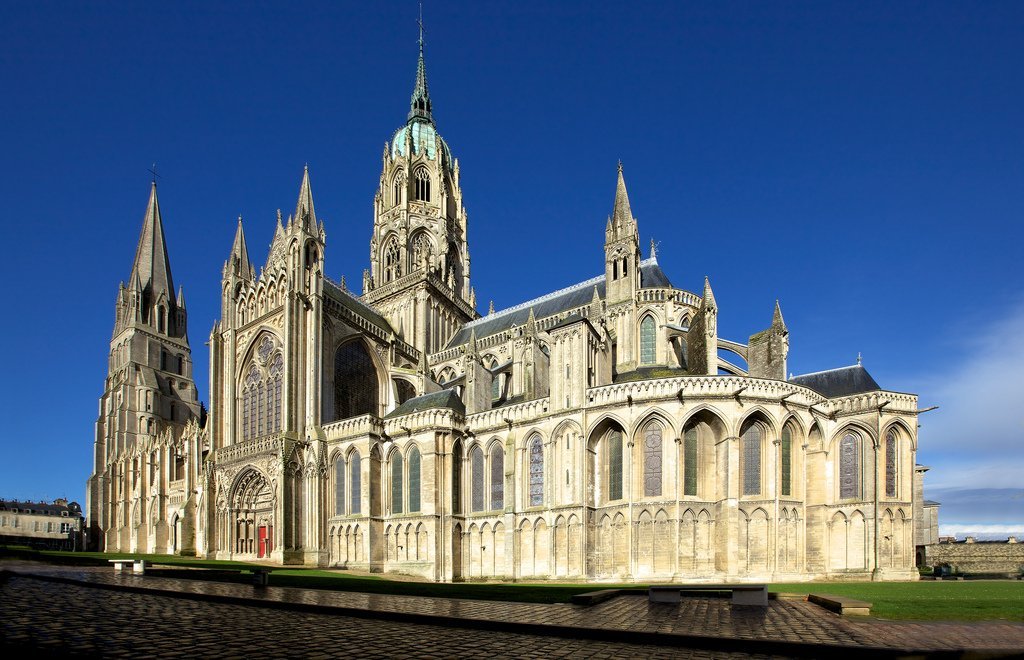 Bayeux, France was the first town liberated after the D-Day invasion and was the site of the historic moment when General Charles De Gaulle greeted his compatriots during his first return to France since the time of   its conquest by Germany during World War II.

The Musée Memorial de la Bataille de Normandie and several other interesting attractions in Bayeux are related to WWII, but the historic Bayeux Tapestry is the town’s most visited attraction.

The Bayeux Tapestry, an embroidery on wool, dates from the 11th century. It was created to tell the story of William the Conqueror and the Battle of Hastings in England (1066), a battle that  became known as the Norman Invasion. As you may know, William was the Duke of Normandy who believed he had been promised the kingship of England and invaded the country when the promise was broken. The Tapestry, consisting of 58 embroidered scenes, is approximately 280 feet in length, two feet high and in amazing condition.  The final few panels of the tapestry have been missing since the French Revolution. Each of the colorful panels of the Tapestry recounts an important part of the history leading the Battle of Hasting, as well as detailing the Battle and its aftermath.  The scenes depict people, events and places and include some commentary in Latin.

The Tapisserie de Bayeux, a UNESCO World Heritage site, can be viewed at the Center Guillaume le Conquerant, on the Rue de Nesmond . The admission fee includes a portable audio unit that provides a panel-by-panel description of the story told in the Tapestry’s images.

The Center Guillaume includes several rooms  that display important aspects of the region’s history and these exhibits help set the stage for understanding the story of the Tapestry. It will take about an hour to view the displays and another twenty to thirty minutes to examine the Tapestry.

The Tapestry viewing room is windowless and darkened to protect the fabric of the Tapestry, which is presented  behind a protective glass but close enough to see the amazing amount of detail put into the Tapestry.  The linear nature of the display and large crowds may result in slow viewing.

For more information on the Tapisserie de Bayeux, see the official website.

After viewing the Tapestry, if you continue down the Rue de Nesmond in a westerly direction, the street crosses the river and changes names near Rue Larcher to become Rue Lambert Le Forestier, which leads to the medieval, gothic Cathedrale Notre-Dame (you can see its towers from most places in the town).

The Cathedral of Notre Dame was constructed in the mid 11th century.  William the Conqueror, Duke of Normandy and King of England, was present for its consecration in 1077. The Cathedral is an amalgam of several different architectures that blend to produce an impressive building. The Tympanum in the Cathedral’s south portal is a well-known depiction of the death of St. Thomas of Canterbury. Entrance is free and tours are provided daily for a fee. If you have time, visit the crypt, as it is one of the few parts of Notre-Dame’s original structure that have survived from the 11th century.  The Cathedral is the place where the Bayeux Tapestry was stored and then forgotten over the centuries.

Bayeux’s Musée Mémorial de la Bataille de Normandie on Boulevard Fabian Ware is a small, interesting World War II museum and, if you are staying in Bayeux, it is worth a visit. Bayeux was the first town to welcome Charles De Gaulle back to France. The General walked the streets with his fellow French Citizens after the town was liberated  (the Musée Mémorial du Général De Gaulle in Bayeux, commemorates this event).

Bayeux is approximately 2.5 hours by car from Paris (260km) and  2.5 hours by train for Saint Lazare station in Paris. Although you can easily walk to the attractions in Bayeux, from the train station, we recommend renting a car for touring Normandy.