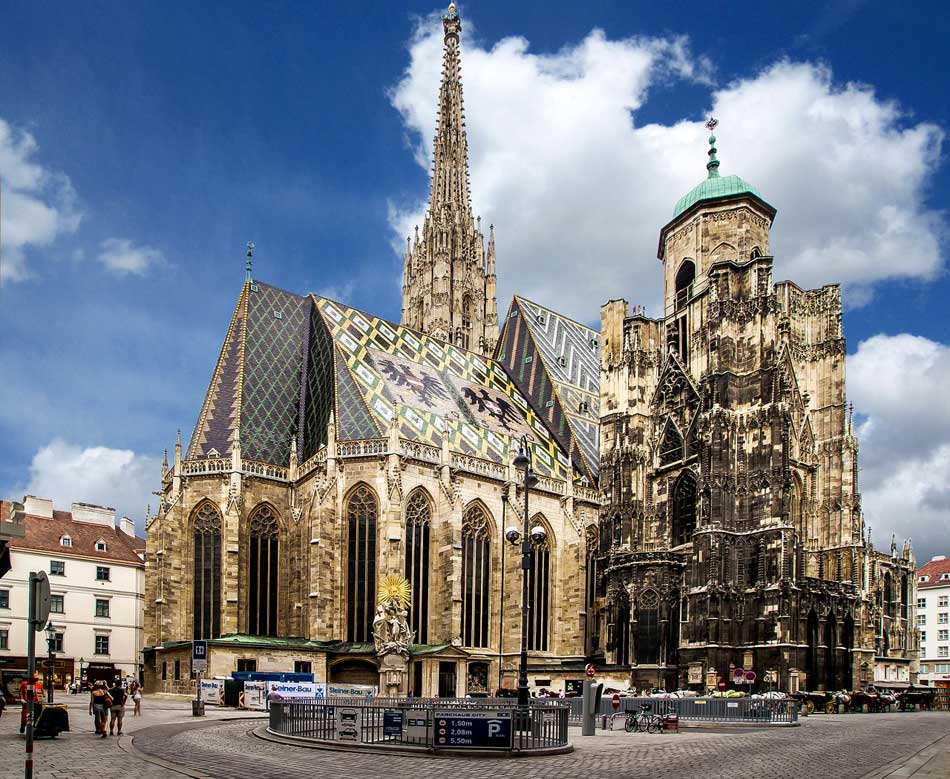 Many of the historical treasures of Vienna, as well as  its most stunning buildings can be found in the city’s numerous churches.  The Habsburgs were Catholic and their  devotion to religion was one of the pillars of their empire.

The most noteworthy of the churches in Vienna were either built or augmented by the Habsburgs.  These impressive monuments  project both the dedication of the Habsburgs to their faith and their desire to build lasting monuments demonstrating their belief that the Habsburg Empire was blessed by God.

The Stephansdom, the city’s famous cathedral, is a towering house of worship wedged into a modest size square known at the Stephansplatz.  St. Stephan’s is celebrated for its Gothic style (although the oldest elements (the Giant Portal and Heathen Towers) are in the Romanesque style. Its most noted architectural features are its tall South Tower (also known as the High Tower and called the “Steffel” by the Viennese) and its striking, colorful roof, comprised of thousands of glazed tiles arrayed with amazing geometric precision. The south side of the roof includes a colorful representation of the crest of the Habsburgs, while the north side bears the emblems of the city of Vienna and the Republic of Austria.

The church was designed as a hall church (with three halls), but it incorporates so many unique design elements that it is difficult to categorize in any meaningful way.

The Stephansdom is smaller inside than one would expect and gives off somewhat of an austere and cold feeling.  Regardless, there are a number of treasures to be examined and we provide a detailed exploration in our Illustrated Guide to the Stephansdom. 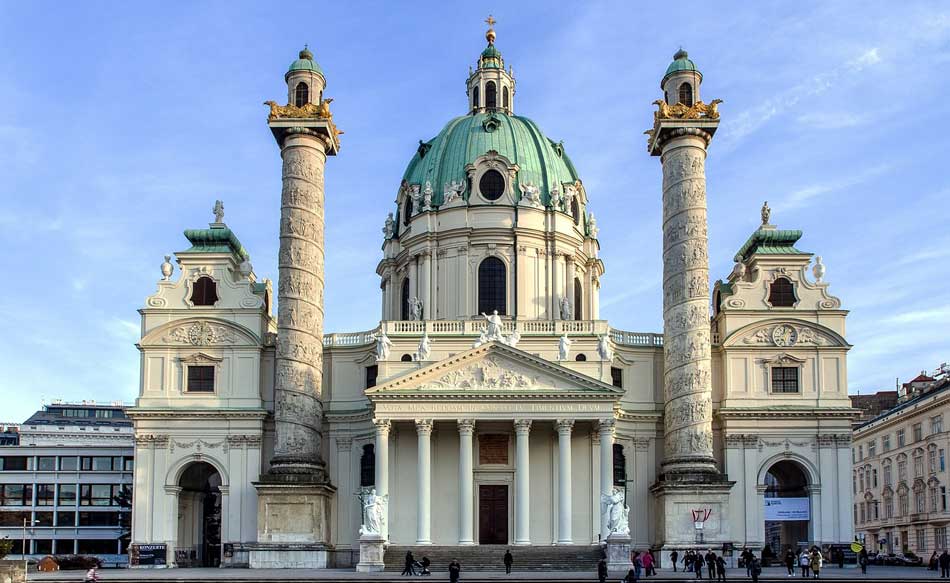 Viewable from the Ringstrasse and located on the southern edge of the Karlsplatz, on the edge of a park-like setting, is the unique Karlskirche (St. Charles’s Church), which dates from 1715.  Vienna had been struck by the plague twice during a ten year period and  Emperor Charles VI vowed to build a new church dedicated to Saint Charles Borromeo, to ward off future plagues (St. Charles was noted for his ceaseless work to help care for the sick during a plague in Milan).

Designed by Bernhard Fisher von Erlach, the Karlskirche combines several architectural styles (Roman, Greek, and Oriental, along with Baroque) to produce one of the most visually stunning churches in Vienna and perhaps Europe.  The unusual exterior is complimented by a wonderful Baroque interior.  For more details on the Karlskirche and photographs of the interior and exterior see our Illustrated Guide to the Karlskirche.

Saint Peter’s Church is a short walk from the Stephansdom.  It is easy to miss St. Peter’s, as it  is very small and unobtrusive.  Touring it will take only a few minutes.

From the outside, St. Peter’s appears very tall for its footprint, although when you examine its dome from the inside, you will notice that the height is used to advantage. It is likely that you will be stunned when you enter, as its interior is a Baroque extravaganza that will be worth every second of your time.  Click here for our Illustrated Guide to the Peterskirche.

Other Churches of Interest

There are several additional churches that might be of interest to you.  For photos of each of these churches, simply click the hyperlinked name.  Note, most of these churches have excellent architecture details and, in several cases, stunning interiors.  Some are renowned internationally, while others are important for their role in local history,

The Franziskanerkirche at 4 Franziskanerplatz dates from the early 17th century and is reputed to contain the oldest working church organ in Vienna.  The exterior of the church is modest and quite plain.  The interior is quite attractive, but in an understated manner.

The Dominikanerkirche, at Postgasse 4, has been the site of several churches constructed dating back to the early 13th century, each being replaced by a newer style of architecture.  The present Dominican Church dates from 17the century  and is one of the earliest Baroque churches in Vienna.

The Jesuitenkirche, also known as the University Church, is located on Dr. Ignaz Seipel-Platz.  Dating from the early 17th century this church reflects the Emperor’s invitation to the Jesuit Order to begin an active role in  Vienna’s religious life  and  as member of the University’s academic faculty. The church members are quite proud that five  bells, purpose-built  for the church, arrived from Innsbruck in 1631 on the 75thanniversary of the death of St. Ignatius Loyola, founder of the Jesuits.

The Baroque appearance of this church resulted from the work of the Jesuit Brother Andrea Pozzo in the early 18th century.

The Votive Church (Schottentor station (U2) on the Ring),  is a neo-Gothic spectacle, which was built in appreciation of a failed assassination attempt of Emperor Franz Joseph. The church was sponsored by  Franz Joseph’s brother Ferdinand Maximillian, who later was assassinated  during his reign as Emperor of Mexico.  The Votivekirche has a very attractive interior and the building is spectacular  when illuminated at night.  It may be your first sight of Vienna, if you take a taxi from the airport.

Maria am Gestade, located on Salvatorgasse at the Passauerplatz is known for its wonderful, thin, lace-work  tower. It is one of Vienna’s oldest churches and dates from the late 14th century, when it was constructed on a site known for several earlier churches.  Maria am Gestade was used by Napoleon’s troops for storage during his invasions of Vienna and fell out of favor and into disuse in the following period.  Restored late in the 19th century, Maria am Gestade is one of the most recognizable examples of Gothic architecture in Vienna

The Assisi Church, also known as the Memory Church, dates from the late 19th century and was consecrated on the Golden Anniversary of Emperor Franz Joseph. It is located on the Mexicoplatz on the banks of the Danube.