A History Of Heidelberg

A History Of Heidelberg

In earlier times, there were at least two castles on the hillside now occupied by the Heidelberg Castle.  The present structure dates from the late 15th and early 16th centuries when construction began on additional fortifications to be fitted to the lower of the two castles.

During the 17th century the Castle was transformed into a princely palace. Many of the buildings that can be seen today, as well as the Castle Gardens were added during this period. 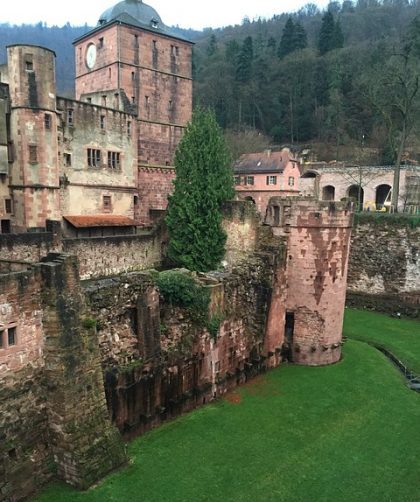 Unfortunately, the Castle was sacked by the French in the War of Palatine Succession in 1689 and again in 1693. During a reconstruction effort during the mid-18th century, several of the castle’s buildings were destroyed by lightning strikes and a  fire caused by the lightning.

Heidelberg Castle’s fate was closely intertwined with that of the Electors of Palatine (a historical area in Germany within the Holy Roman Empire that had influence in the election of the Holy Roman Emperor). The castle grew in terms of buildings, wealth and stature as the Palatine Electors became central players in the political scene of the time.

Ruprecht III, one of the Palatine Electors, became king of the German Empire (The Holy Roman Empire of the German Nation) in 1400. Ruprecht and his successor Ludwig V were responsible for converting Heidelberg Castle into a princely residence. A number of their successors added to or modified the structure. In the early 17th century the Hortus Palatinus, the garden complex next to the palace, was created and became an item of considerable acclaim, even being billed at the time as the “Eighth Wonder of the World.”

Later in the 17th century, the Castle became a flashpoint between the intentions of the Habsburgs and the  desires of the French monarch when Karl II died childless in 1685. As fate would have it, the Imperial troops of the Empire were embroiled in battle with the Turks to the east and the French were able to besiege, capture and destroy parts of the Castle in 1689. However, the castle  was taken for a second time by the French in 1693 and it was at this point that the French attempted to demolish as much of it as possible.In the 18th century the center of political power in Germany  was transitioned to  Bavaria (Munich) and the Wittlesbach dynasty.  During this transition, Schloss Heidelberg fell out of favor.   It was also around this time that  a severe lighting storm damaged several of the buildings at the castle, as well as igniting a fire that damaged other  buildings.  These dual tragedies ended forever the storied development of Schloss Heidelberg.

However, the symbolism that the castle ruins conveyed to visitors, far outshone the importance of its builders. In later years it became a favorite of Goethe, numerous other painters, poets, romanticists and writers  from around the world, including Samuel Clemens, better known as Mark Twain.

Today, Schloss Heidelberg has captured the public’s imagination and is an image known throughout the world. For a number of years there was a great debate in Germany over whether to rehabilitate and rebuild the castle, or simply to preserve the ruins in the best manner possible. As is often the case with historic monuments, the present day castle consists of preserved ruins and some rebuilding (e.g. the Friederich Building, and other modest renovations). Suffice it to say, the Schloss Heidelberg and its setting provide for an exceptional exploration that is simply awe-inspiring.  If you have the opportunity to visit this area, a visit to Heidelberg Castle should be at the top of your list. 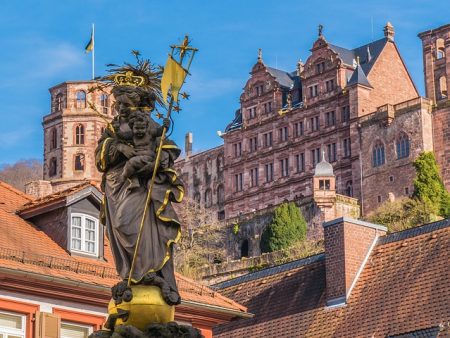 While you can see the castle on your own, we advise you to take a guided tour of the castle, as the guides are informative and will provide insights that might escape your eagle eyes without their help. The guided tour included a visit to the museum, better known as the House of the Castle History, located in the Ruprecht building, continues to the Library, English Building, Ladies Building and ends in the Friedrich building with a tour of several furnished rooms and the Chapel.

An audio tour is offered in 7 languages.  More information on the audio tour can be found at this official website . The audio-tours devices can be rented near the  ticket shop.  The guided tours can be arranged at the booth on the right (look for the sign) after you pass through the Gate Tower.The Schloss Heidelberg is open 8 a.m. to 6 p.m.
The Pharmacy Museum opens later (10 a.m.).
The Garden can be toured without charge.
A restaurant is available at the Fasskellar (the Barrel Cellar) and another at the Schlossweinstube, just inside the Castle Gate.